On our way to the Gobi, the landscape changed remarkably fast. Almost without us noticing, the rolling hills have disappeared and the land stretched out entirely flat before us. When hearing about the Gobi, one imagines dry, sandy landscapes as far as the eyes can see, but this area is actually mostly steppe and from afar, looks almost as green as any other place in Mongolia. Only when looking closely, one can see that the ground is mostly gravel and sand with small bushes peaking out in between. When leaving Arvaikheer, our driver also told us to say goodbye to paved roads, as there are almost none in the Gobi, and indeed it took 4½ days before we would see them again. On the way, we passed a huge herd of camels, probably 500 to 1000, that stretched out over the horizon. Sam’s lens wasn’t wide enough to capture more than a fraction and even our experienced driver said he’s never seen so many at once before. 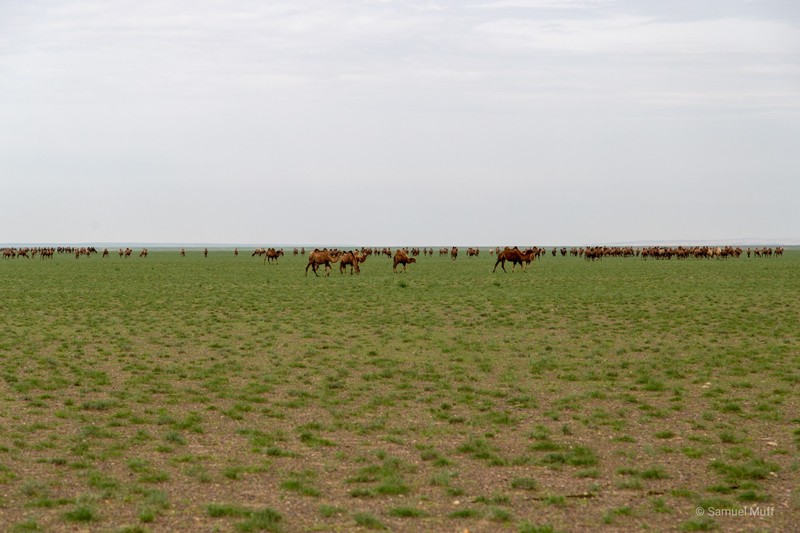 In the afternoon, we arrived at our first stop in the Gobi, the Ongiin monastery. The monastery itself, was not much to look at, as it has been completely destroyed in the communist times and only one temple has been rebuilt amongst the ruins. The location however was very beautiful, with a scenic river bending its way through the rocky hills. Our ger camp also served a very tasty vegetable soup and, for the second time in Mongolia, delicious bread. We also learned that in Mongolia, a vegetable soup is not free of meat, it simply distinguishes itself from the more common soups that contain nothing but meat. 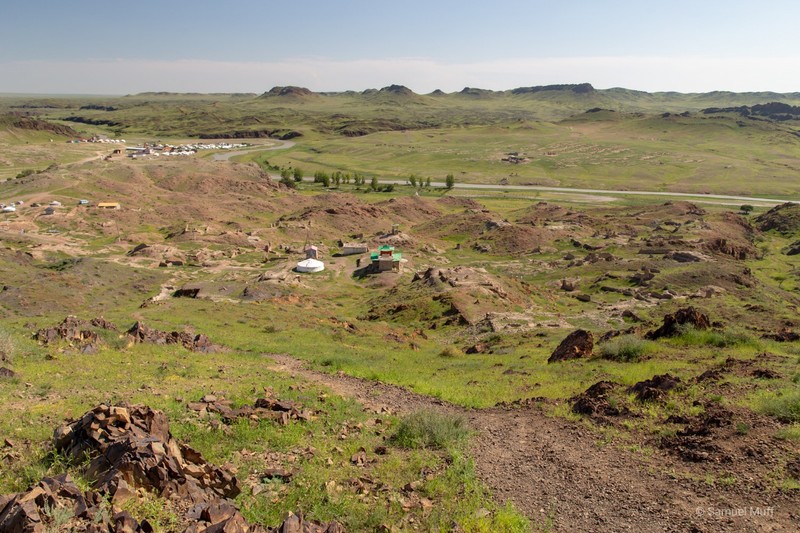 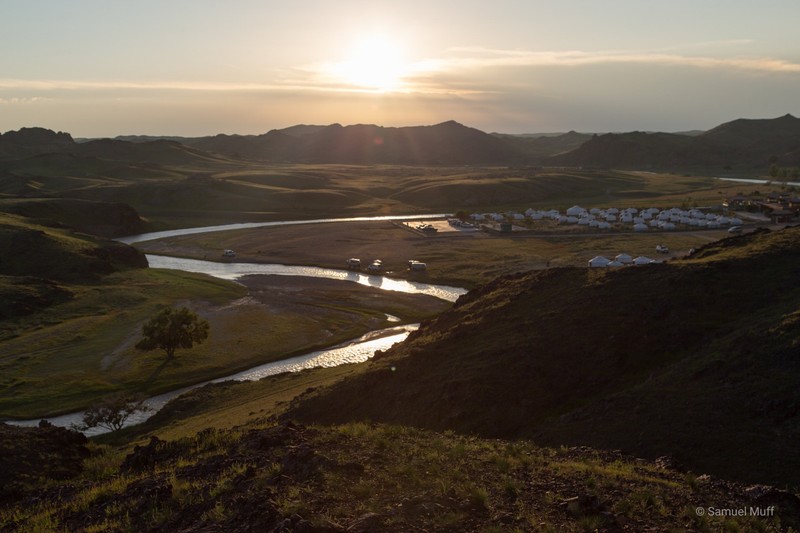 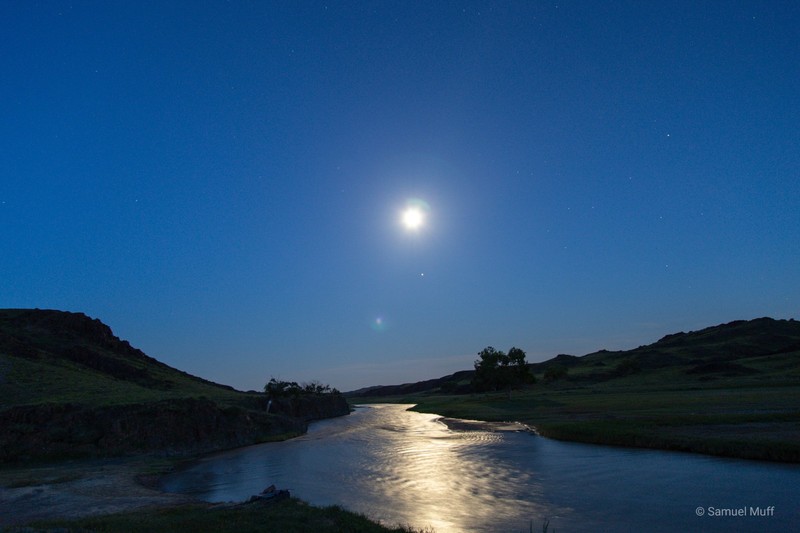 Our next night we spent at a family ger near Bayanzag, also known as the flaming cliffs because of its rocky cliffs in a deep red color. The colors were not so impressive that day, as thick layers of clouds hid the sunlight, but we nevertheless enjoyed the walk along the top of the cliffs. This place is world-renowned for its huge amounts of dinosaur bones and eggs, which have of course all been excavated and shipped to museums around the world, so we did not see any of that there. We went back to our ger when we saw heavy rain approaching from the south. 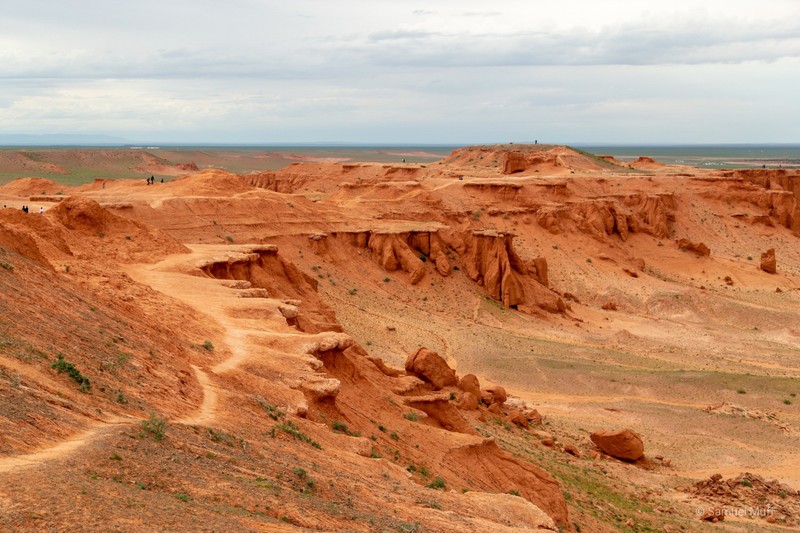 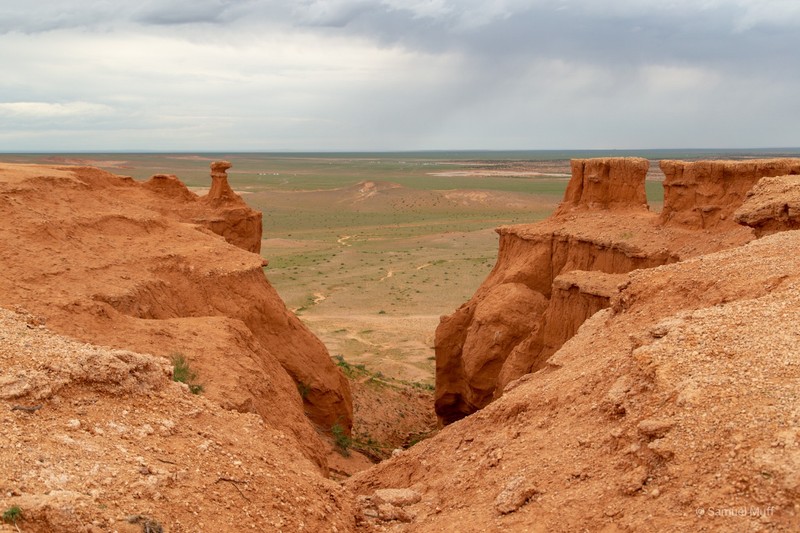 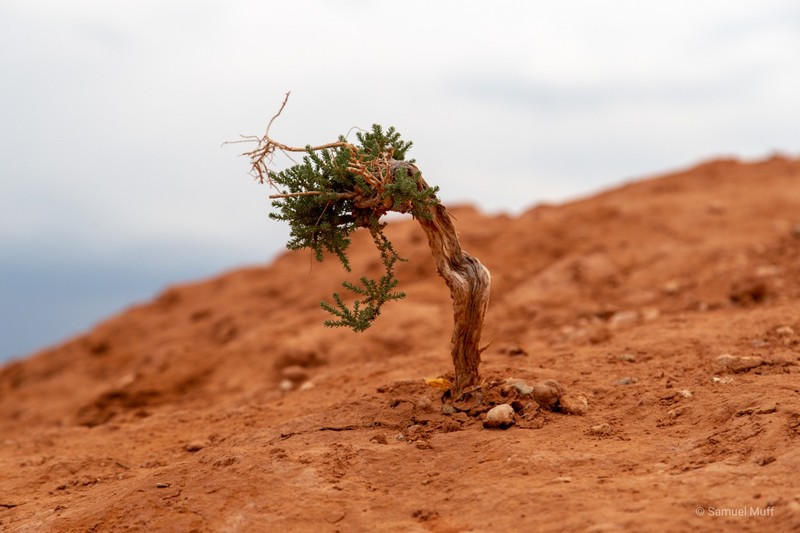 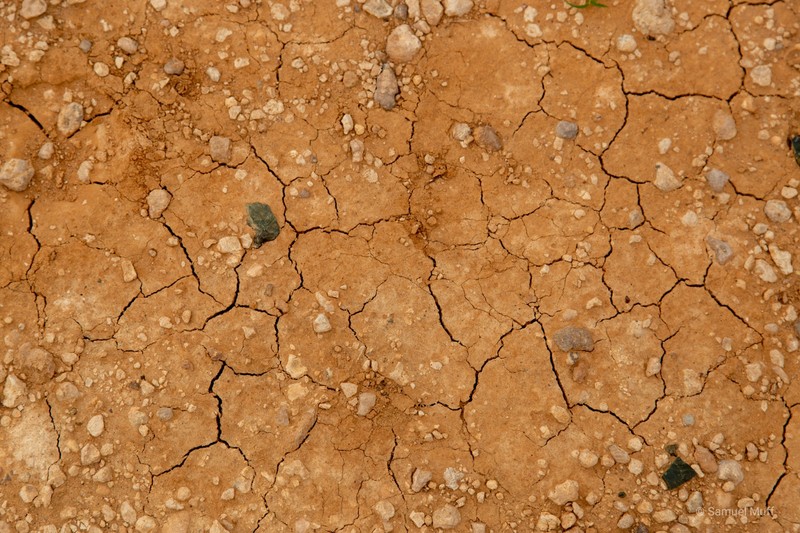 It was raining heavily almost all night, but luckily it stopped shortly before we left in the morning. The rain had changed the desert beyond recognition. A sea of white and purple wildflowers has appeared overnight and it gave the landscape a much more friendly face. 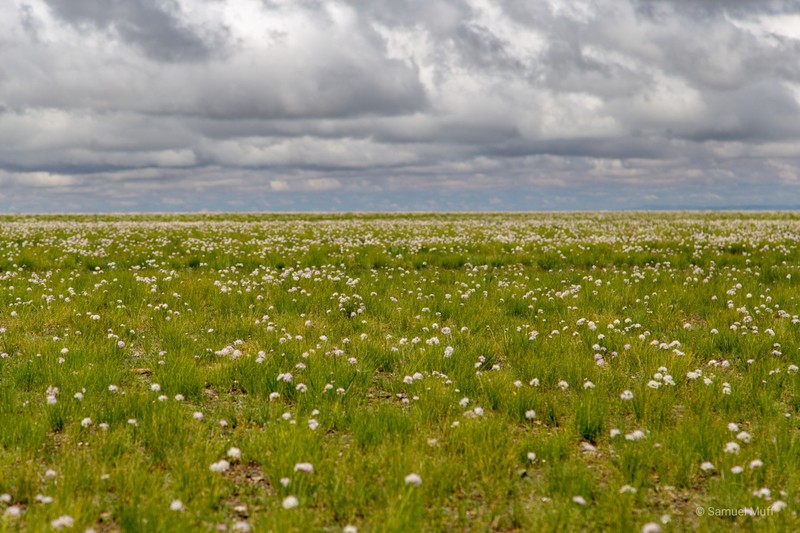 In the morning we made a stop at the Khavtsgait Petroglyphs, an interesting archaeological site where between five and ten thousand year old rock carvings can be discovered. It is unknown why they were created. 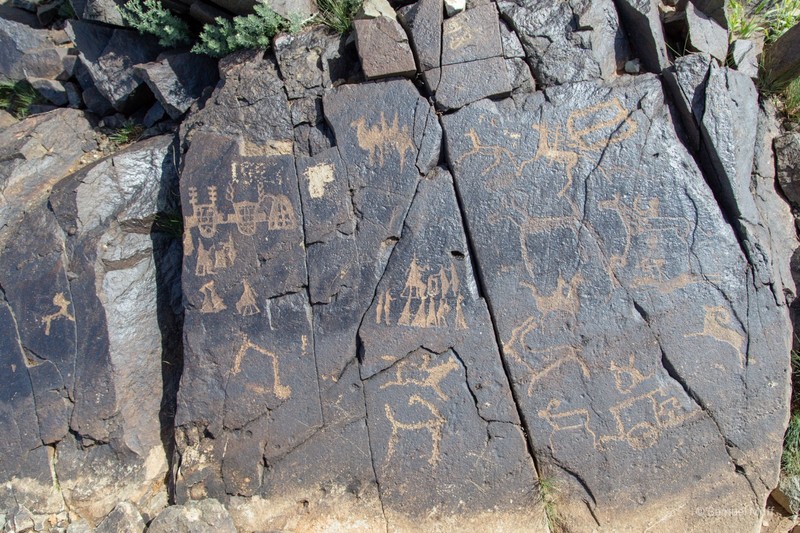 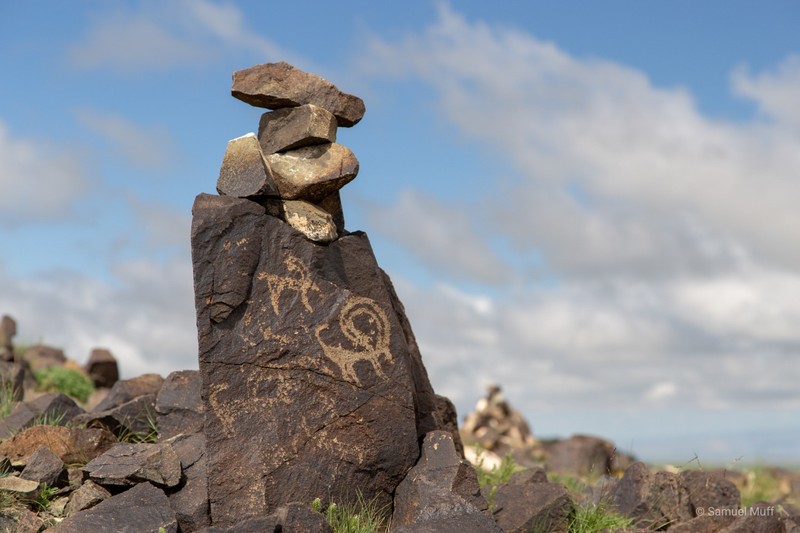 Afterwards, we drove to the most desert-like location in the Gobi, the sand dunes of Khongoryn Els, where we decided to spend two nights. In the evening, we climbed up the highest part of the dunes, which was incredibly strenuous. The path was very steep and we kept sliding down constantly in the soft sand, making it almost impossible to rest. Exhausted and with aching legs, we arrived at the top, 200 meters up from where we started. There, we rested and watched the beautiful setting of the sun over the dunes, followed by the rising of the full moon in the opposite direction. The way down was much quicker and much more fun, as we could joyfully run and jump down the dunes, with the sand always assuring a comfortable landing. 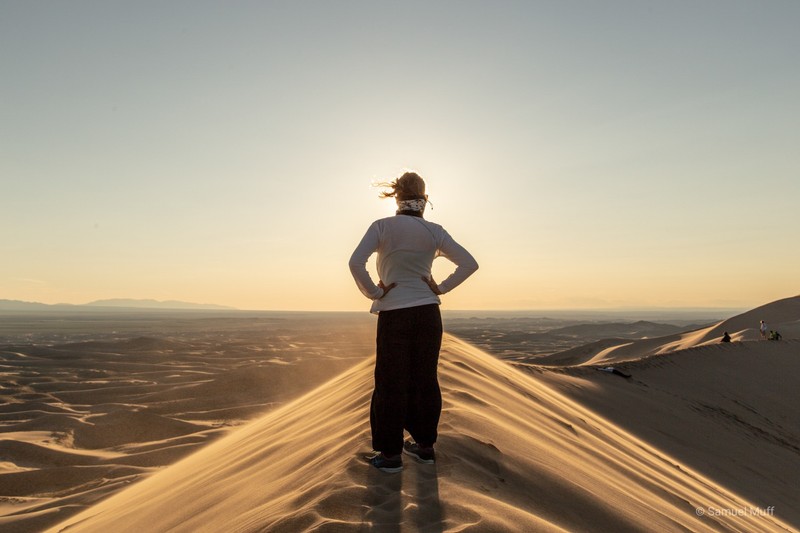 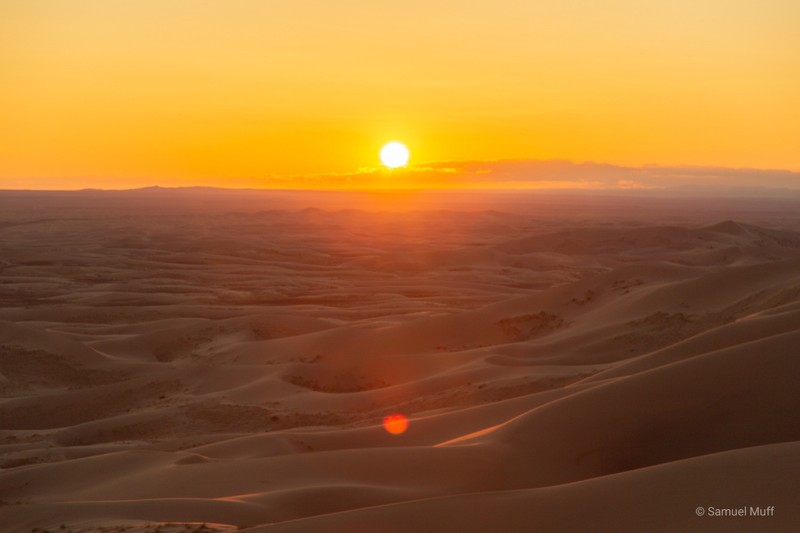 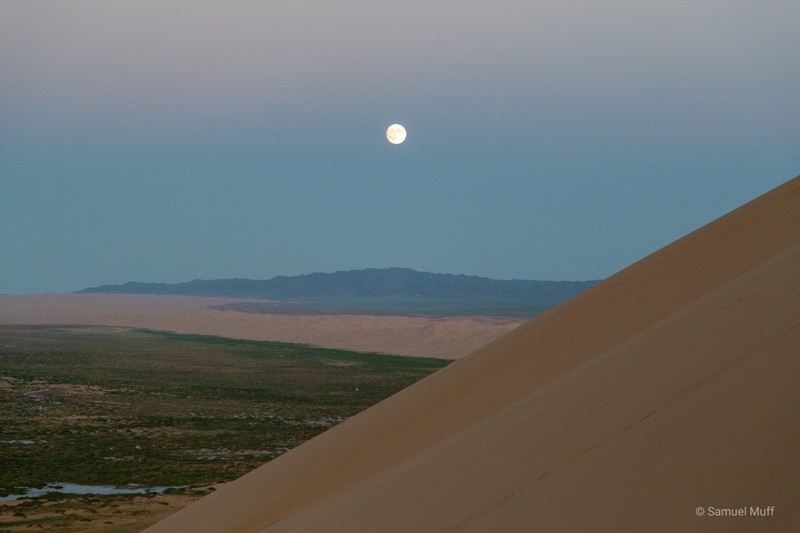 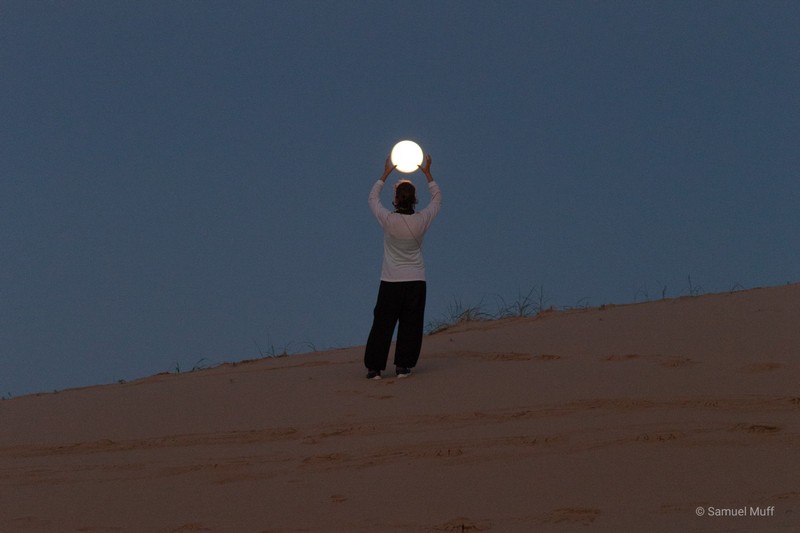 The next day we organized a 5-hour camel trekking through the dunes, which turned out to be a big mistake. Firstly, the camels smelt terrible. We had the hope that we would just get used to it after a while, but somehow it got even worse on the way with the camels farting and pooping all the time. Secondly, the saddles were very uncomfortable and sitting on the camels was, literally, a pain in the ass. The first two hours were ok, as we at least felt that we experience something new, but the next two hours were just agony. After four hours we decided that we cannot take it anymore and walked the rest of the way. Sitting hurt for the next 3 days. 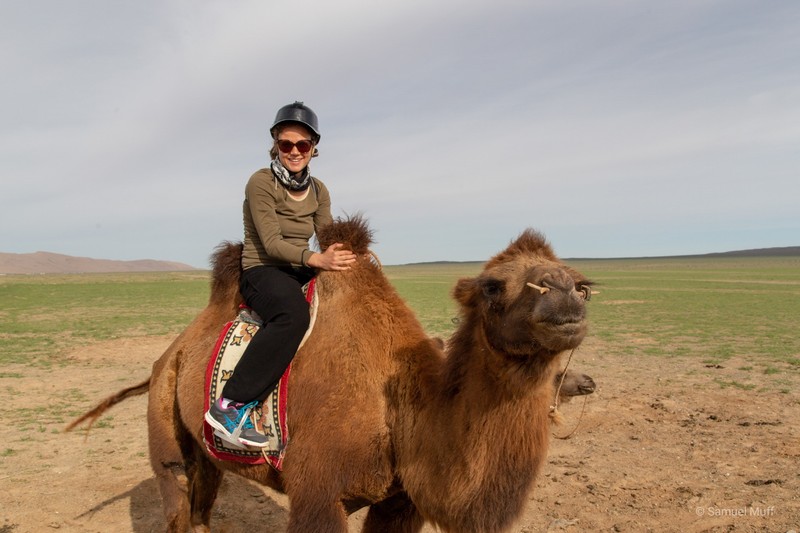 After 2 nights at the sand dunes, we started our way back to Ulaanbaatar and thereby back to civilization. In the afternoon, we were delighted to be back on paved roads. As the drive to Ulaanbaatar would have been too much for one day, we stopped for the night in Mandalgov, the provincial capital. From there, we went to see the granite-rock formations of Baga Gazryn Chuluu, a nice location for a short hike. On the 28th of August, after 15 days in the Mongolian countryside, we came back to Ulaanbaatar, where we immediately went to our favorite Indian restaurant to fill our hunger for spiced food. 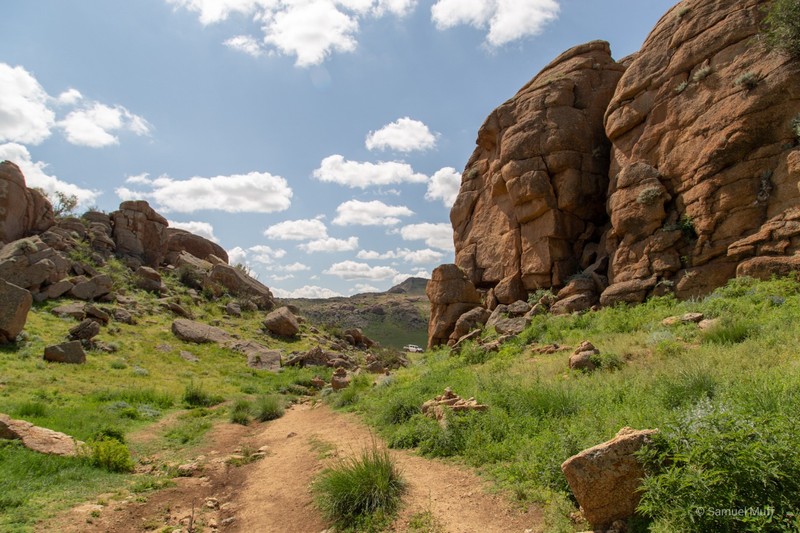 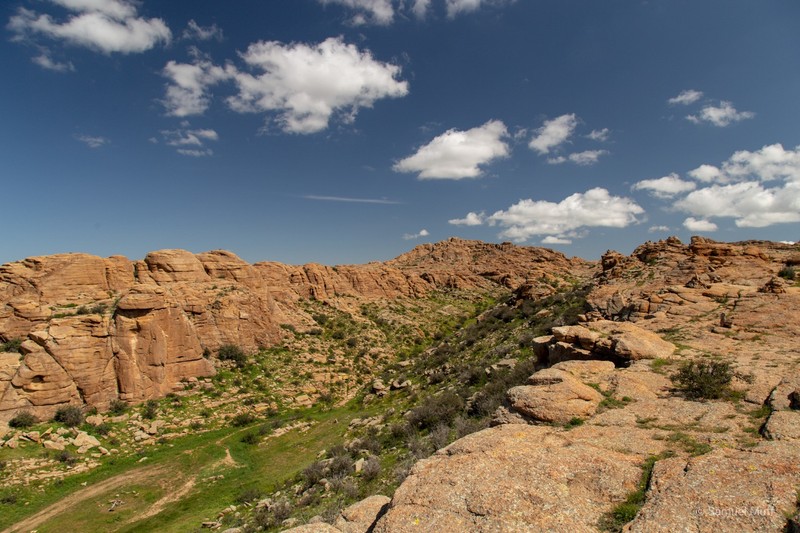 Posted by samandmarta 18:00 Archived in Mongolia

You were so lucky to see the desert immediately after rain. I bet few people manage that.