After resting one day in Ulaanbaatar, we spent our last days in Mongolia around Terelj, a small village in a national park and, thanks to its proximity to the capital, the most popular place for tourists that only stay a few days in the country. On the way there, we visited the giant statue of Chinggis Khaan, towering 40 meters high and looking out over his land. 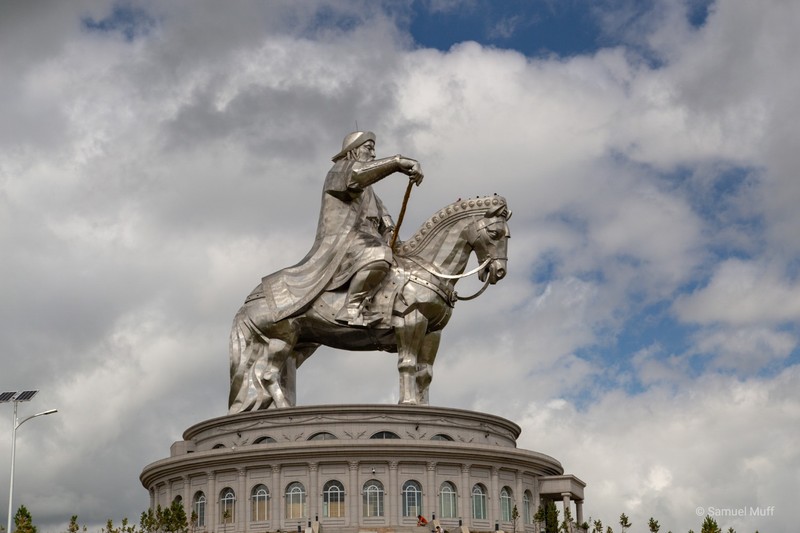 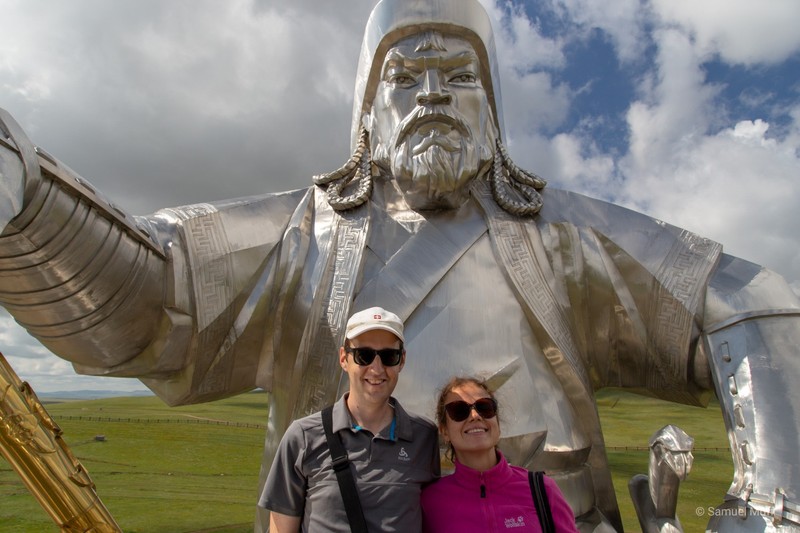 Already inside the national park, a giant rock shaped like a turtle draws the attention of tourists passing by. Next to the rock, some locals were offering photo-ops with a trained eagle, which Sam was happy to do. The eagles look even more impressive close up then from far below. 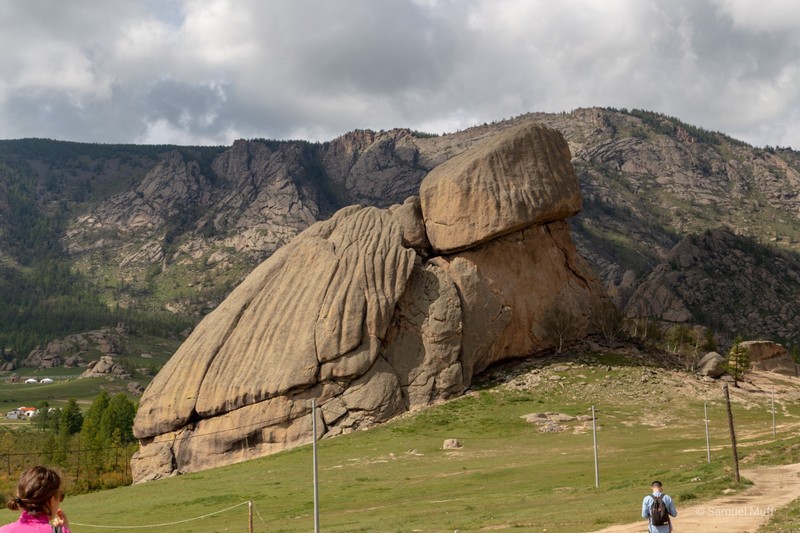 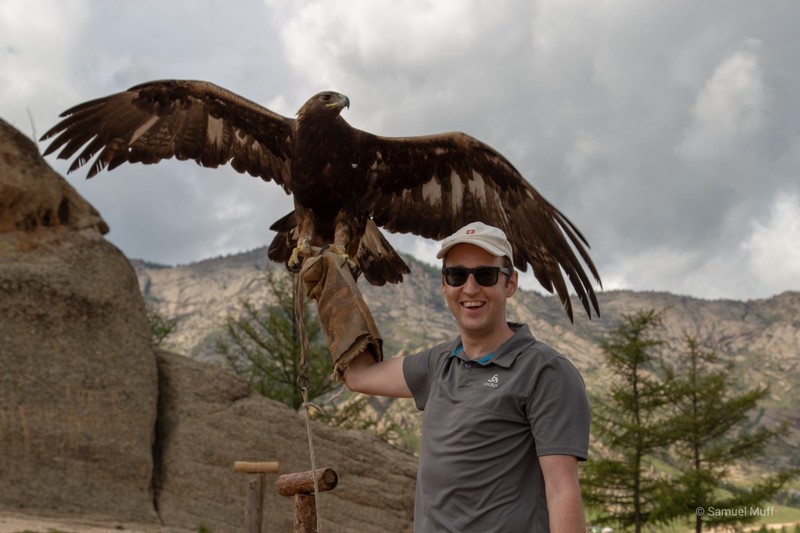 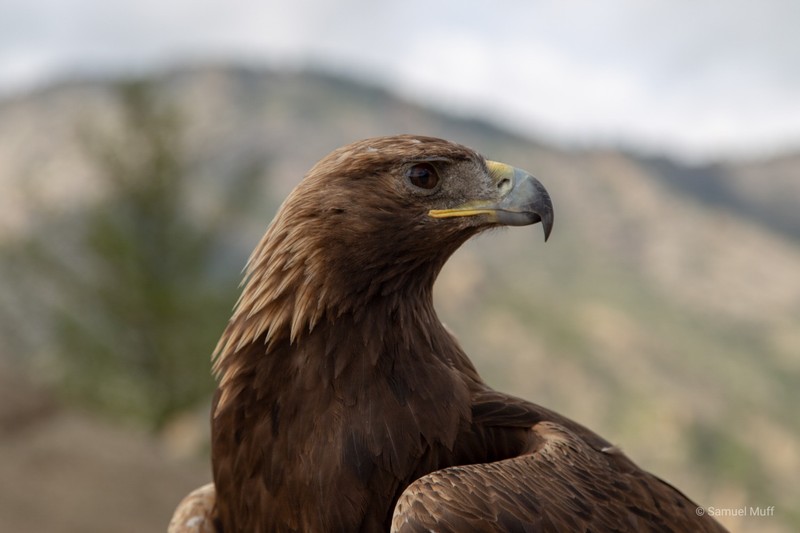 We spent the rest of the day hiking around the national park. The landscape was quite mountainous and reminded us a lot of Switzerland. Compared to the rest of Mongolia however, it was clearly visibly that this area was more developed for tourism as there were ger camps visible in every direction. In one of those camps, we spent our last night inside a ger. An oddity of ger camps in Mongolia is the check-in and check-out procedure. Not in one ger camp we have stayed were we ever asked for our names, our passports, a credit card or any kind of security whatsoever. We were simply shown a ger, or told its number, and handed a pad-lock for the door. The check-out is similarly disorganized. No one ever asks you to pay. As there is no reception, you are usually left with the challenge of hunting down someone who looks responsible for the camp and give them some money. We always had the impression that we could simply walk away without paying an no one would even notice (of course we never did that). 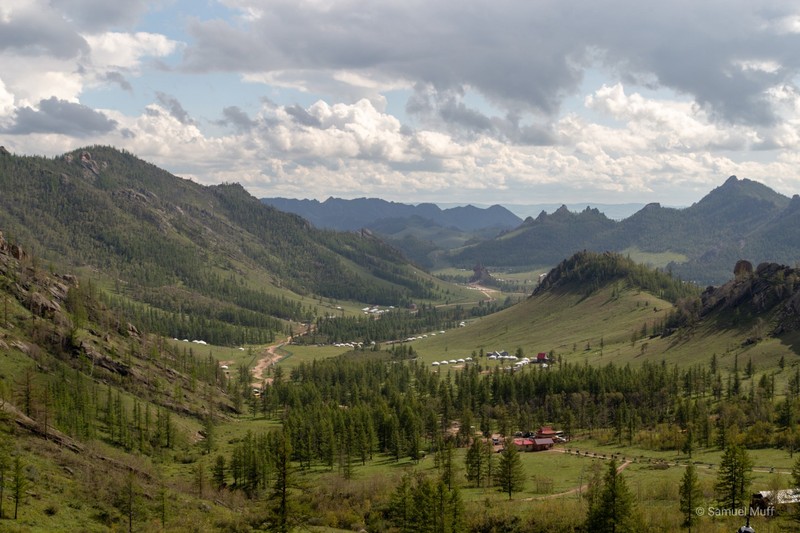 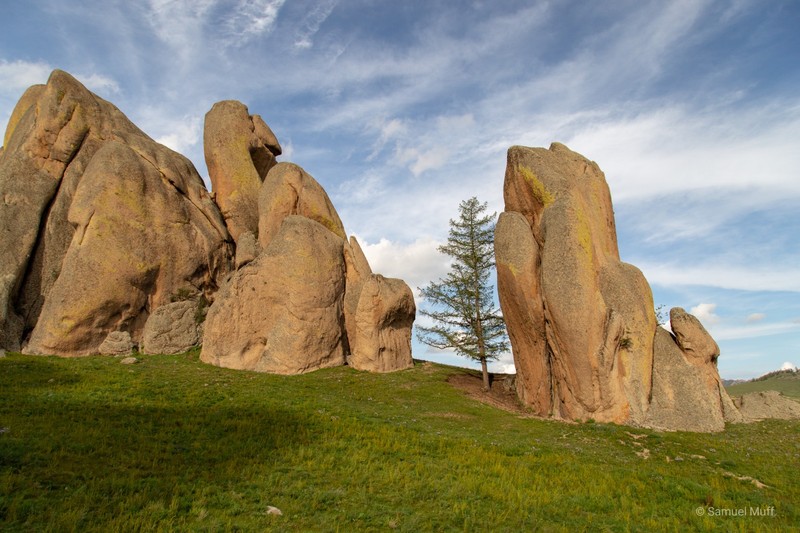 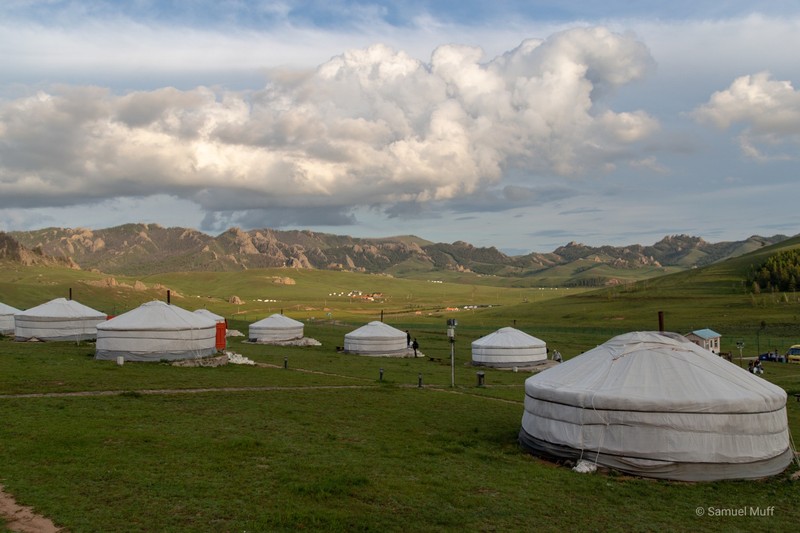 After our last night in a ger, we had a special treat planned for our last night in Terelj. As the weather was rainy anyway, we have booked a room in probably the best hotel outside of Ulaanbaatar, Terelj Hotel & Spa. At last, we could relax in a comfortable bed and revitalize in the hotel pool, the jacuzzi and the sauna. 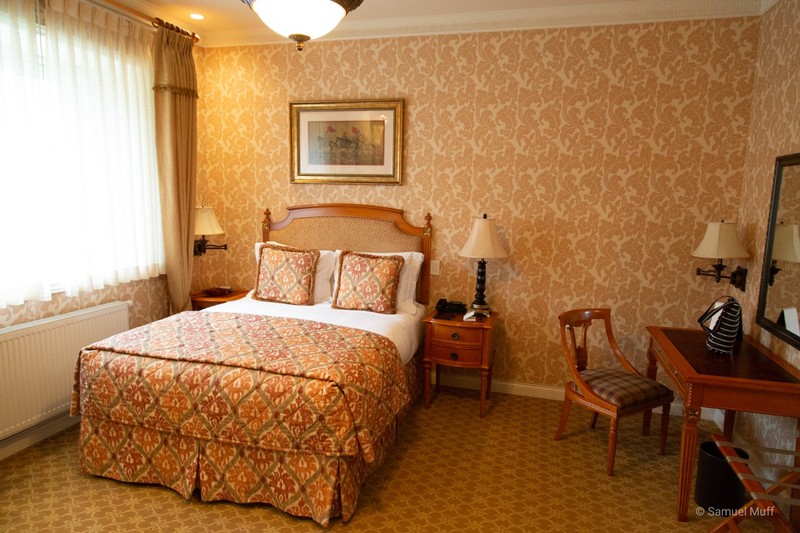 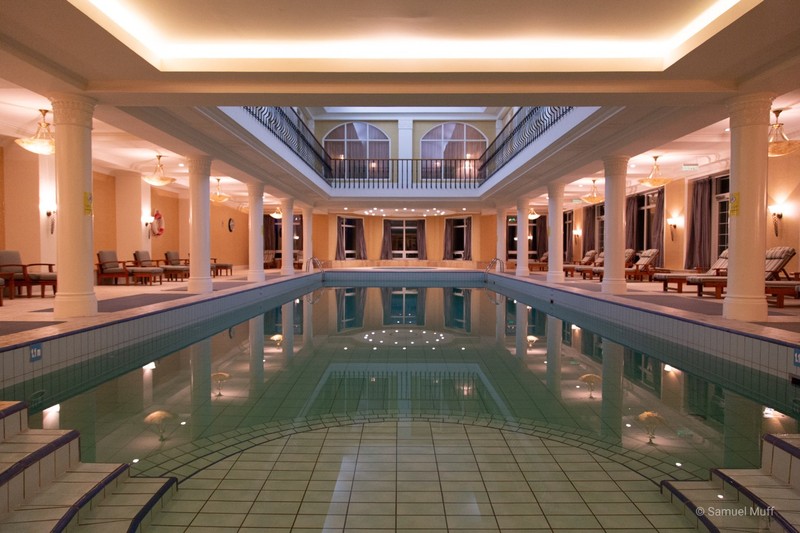 We spent one more cloudy night in Ulaanbaatar (and one more dinner in our favorite Indian restaurant) before boarding the train to Beijing early on Sunday morning. Our suspicions were confirmed that the Chinese-run trains are not as nice and clean as the Russian-run ones. Most of the Mongolian part of the journey went through the eastern part of the Gobi. The skies cleared up as we went away from Ulaanbaatar but the landscape was largely flat, dry and empty, with the occasional herd of camels, horses, sheep or cows along the way. 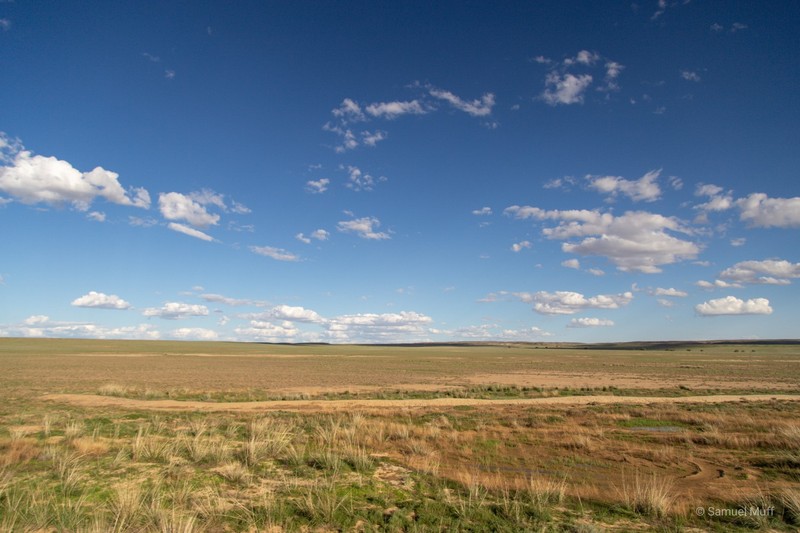 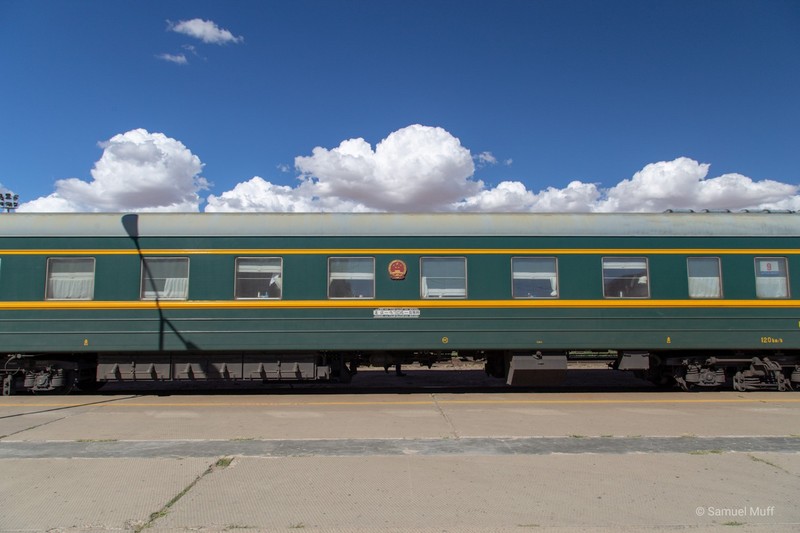 Around 7pm, we reached the Mongolian border town of Zamyn-Üüd, where our passport were swiftly checked and stamped. 2 hours later, we arrived at the Chinese side of the border, in Erlian, where the procedure took much longer. Unlike all the other borders before, we actually had to get off the train here and stand in line at a check-point like you would find at an airport. After that we had to wait almost 3 hours in a waiting room (fortunately, we had books with us) before we were allowed back on the train. During this time, the train was actually pulled off the station to change the bogies, because the width of the tracks in China is different from the ones in Russia and Mongolia. Around 1am, we could finally get back on the train and went immediately to sleep.

To draw a conclusion from our stay in Mongolia, we can say that it is definitely worth the adventure. However, we recommend taking some spices to improve the food and be prepared for long drives over bumpy dirt roads and difficult sanitary conditions. If you can bear that, you will be rewarded with beautiful landscapes, interesting cultural experiences and an incredible feeling or true remoteness that is difficult to find nowadays.

Posted by samandmarta 20:00 Archived in Mongolia