After a 5 hour flight from Tahiti we arrived to Easter Island, our last stop in the Pacific. Politically, the island already belongs to South America, as it was annexed by Chile in 1888. But culturally, Rapa Nui, how the native inhabitants call it, is definitely a part of Polynesia. One thing that we came to like about our long trip is that it lets us see cultural and historical connections between different countries that would go unnoticed when visiting these places years apart. It was fascinating to see how the incredibly far away islands of Hawaii, Tahiti and Rapa Nui share a very similar language and similar cultural elements, like the ritual of giving Leis (flower necklaces). A testimony to the fact these islands were settled by the same peoples, who have then retained the same culture for hundreds of years.

We enjoyed the first evening on the island with a Pisco Sour, but there is, of course, exactly one reason why we and most everyone else decided to stop in Easter Island: Moai. We spent 5 days exploring the different locations where one could see Moai. The anthropomorphic statues were created as images of the inhabitant’s ancestors. The Easter Islanders worshipped their ancestors and hoped they would protect their island from the dangers of the ocean, which is why almost all Moai are facing towards the inside of the island and away from the sea. There is only one group of Moai, called the Seven Explorers, that is looking towards the ocean, as they were meant to traverse the Pacific Ocean in search of other civilizations. 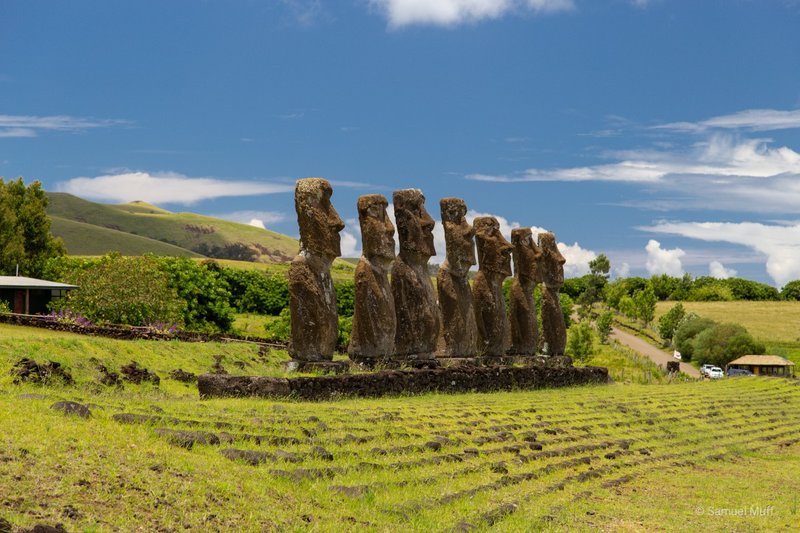 The statues were carved out of volcanically hardened rock and they are from 3 to 10 meters tall. Some of them weight as much as 10 tones and until today, nobody knows exactly how these statues were transported from the place of their production to the various locations around the island. Some hypothesize that they were rolled on tree trunks, while others speculate some form of sledges was used to move the heavy load. It was truly fascinating to see these huge statues standing around, something that can be seen nowhere else on the planet. 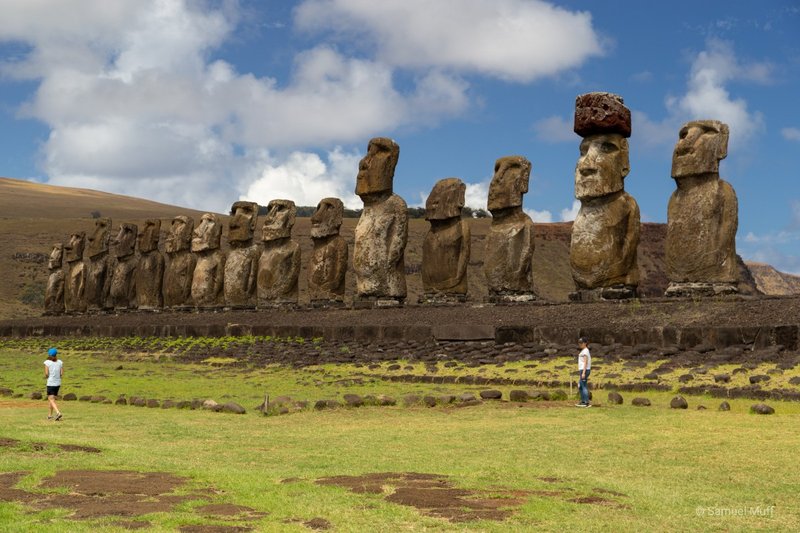 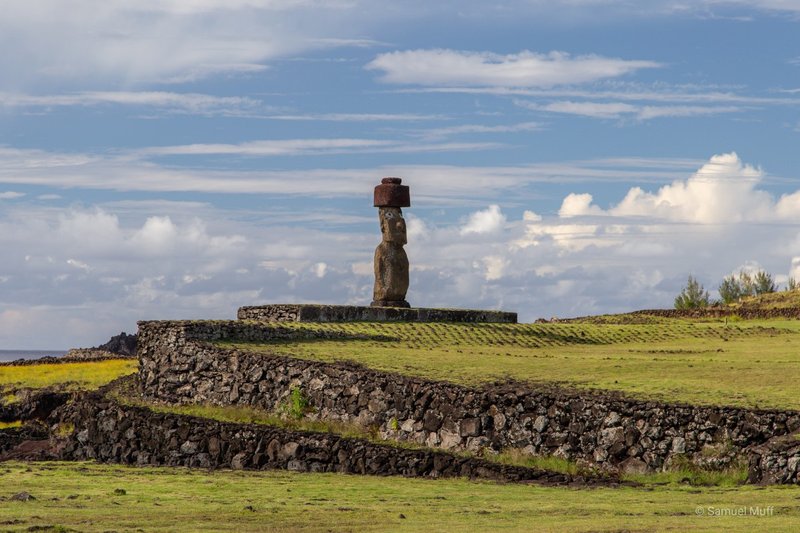 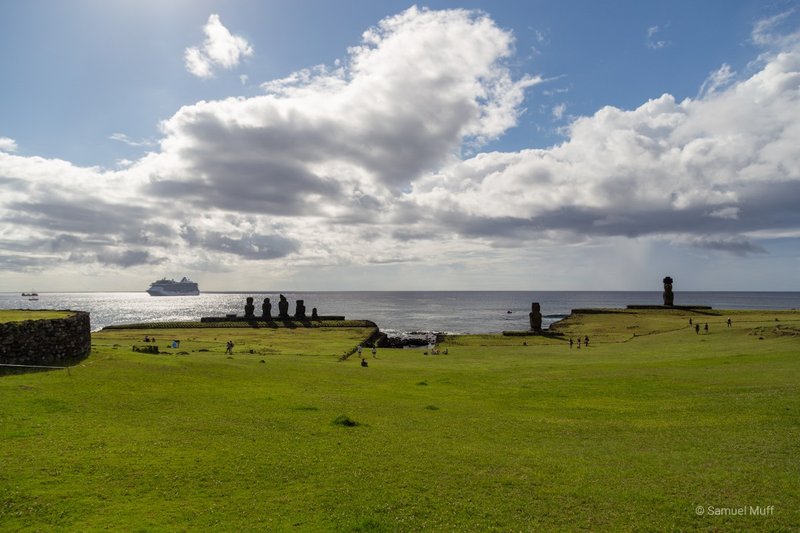 3 groups of Moai facing away from the ocean 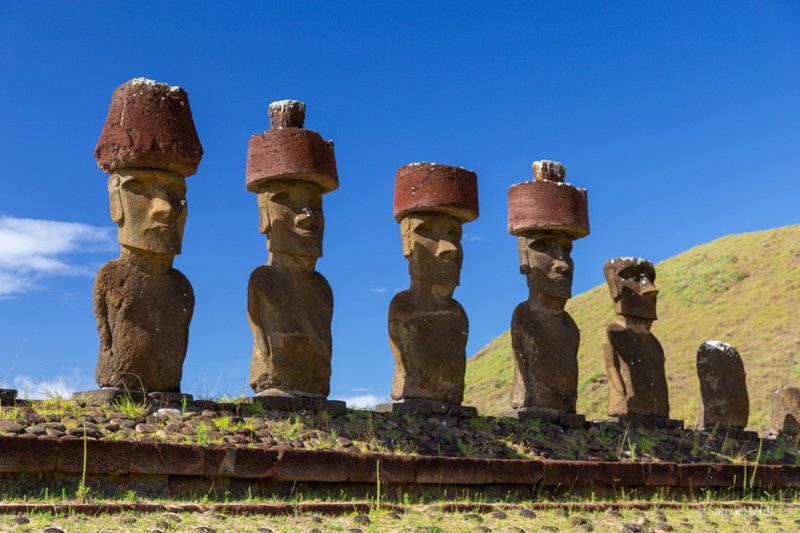 The most stunning place on the island was Rano Raraku, the quarry where all Moai have been created before being transported to their final location. There were dozens of Moai in different states of construction standing or laying around on the slopes of this mountain. We were amazed by the amount of details that was still visible in the carvings of these statues. The only parts of the Moai that are not from here are the red hats that can be seen on some of their heads. These originate from another quarry far away, which we also visited. 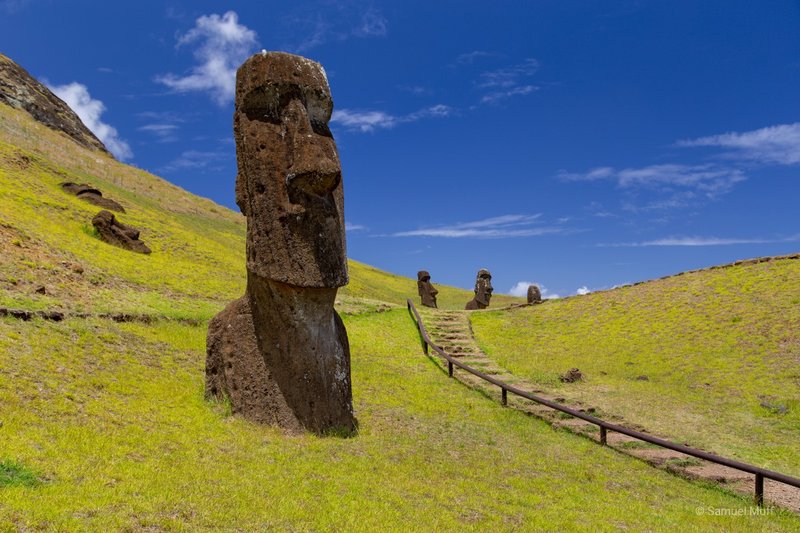 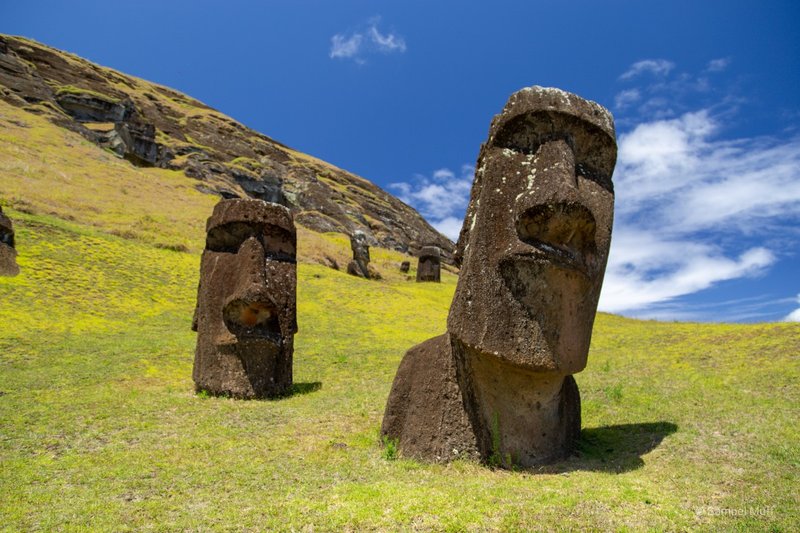 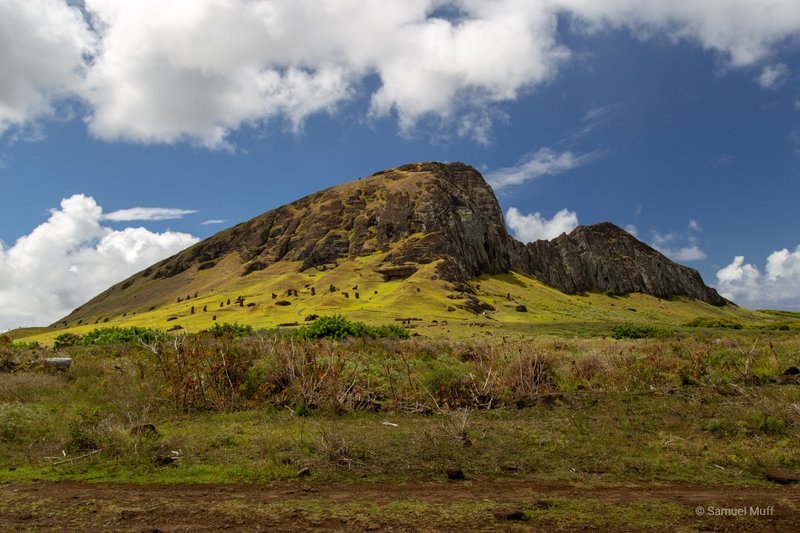 Besides the Moai, the island is not particularly beautiful. We did a few hikes, but the landscape is for the most part very barren, a stark contrast to the dense vegetation we saw on all other Polynesian islands we visited. Legend has it that the Rapa Nui were once a prosperous civilization, but they used their resources in an unsustainable way, cutting the trees faster than they could grow back and overhunting the diverse fauna. This is said to have led to the fall of their civilization and to the state of the island as it is now. The few trees that can be seen today have all been planted in the last 50 years. 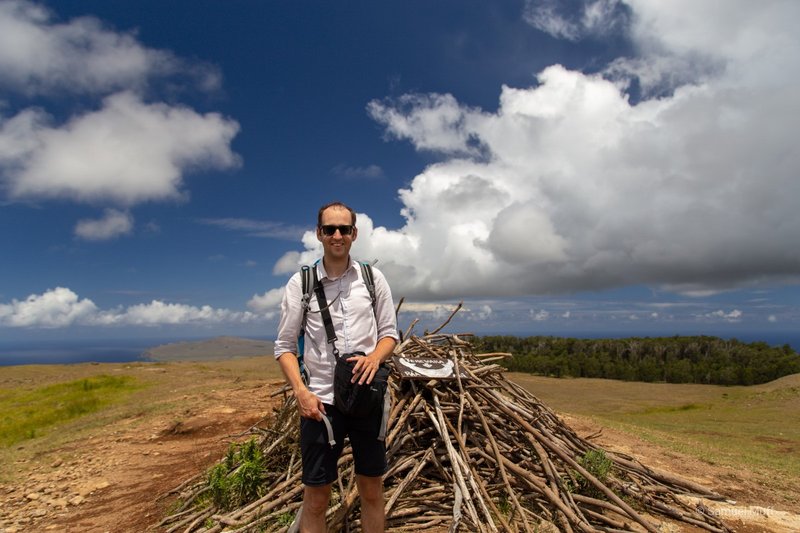 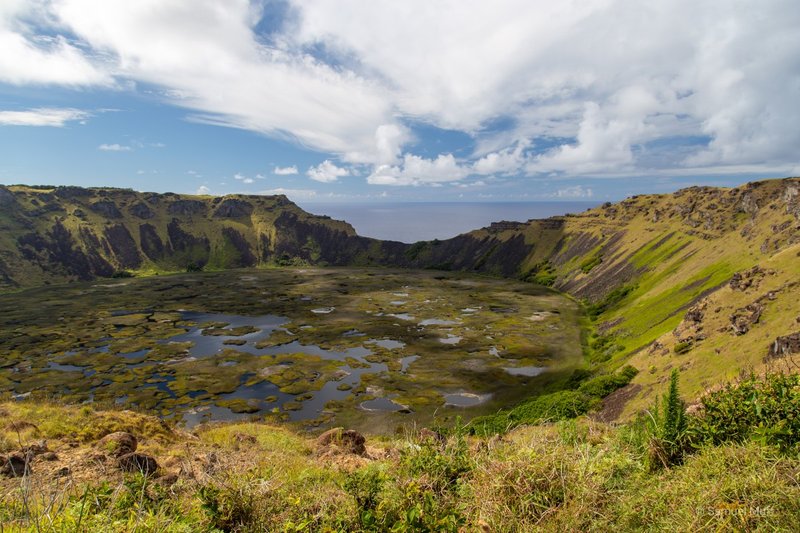 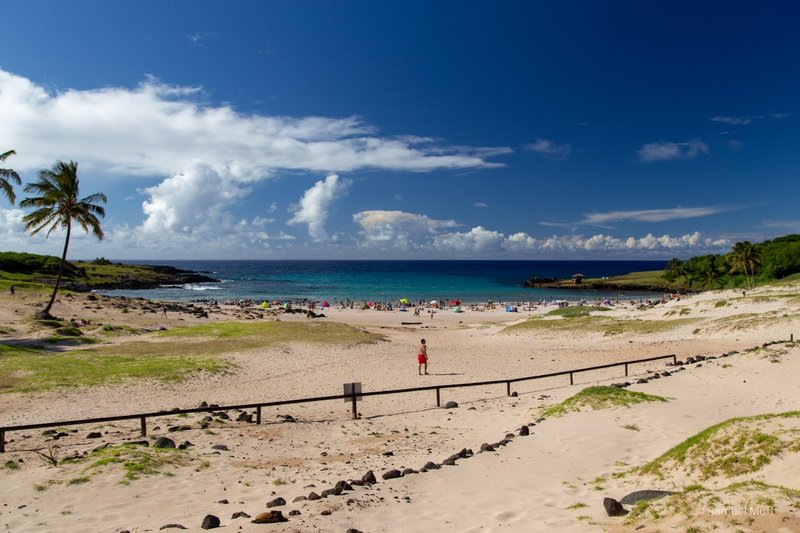 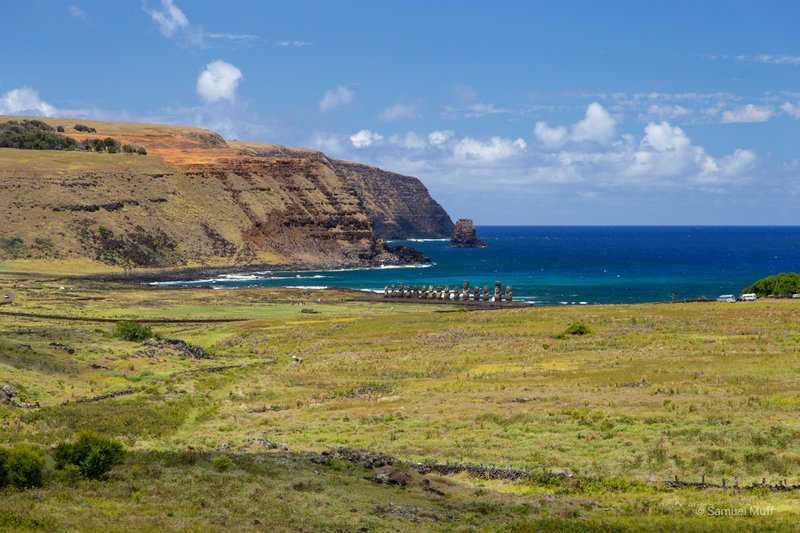 Ahu Tongariki with Peninsula Poke in the background

Overall, our 5 days on Easter Island were a good farewell to Polynesian culture and a great welcome to Chile. It was one of these unique places where two cultures mix and coexist peacefully and Hola! can be heard as often as Iorana! 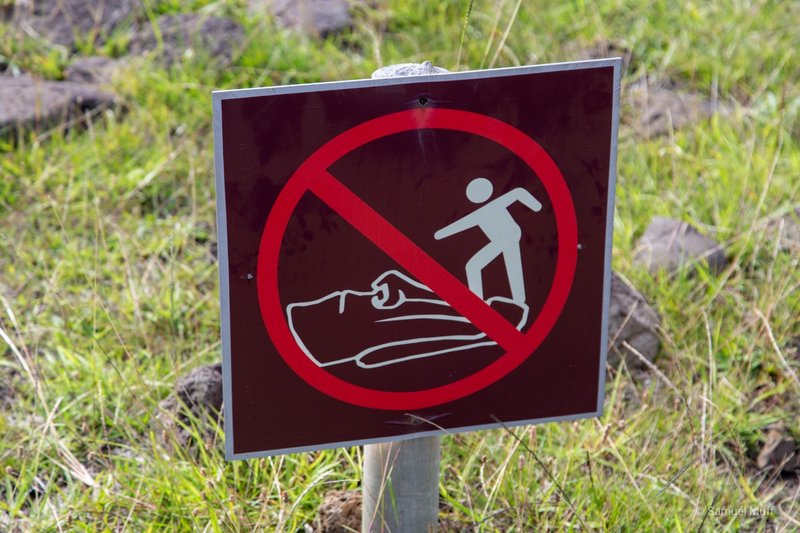 Posted by samandmarta 08:11 Archived in Chile