We started driving the Carretera Austral, known officially as Ruta 7 in Chile, from its start in Puerto Montt. The highway was the brainchild of dictator Augusto Pinochet, who wanted to unite the nation by connecting even its most remote parts. It cuts through the Aisén region, Chile’s most sparsely populated one. While originally just a gravel road, many parts have been paved now and paving is ongoing. Two sections near the start of the highway are interrupted by large fjords which require a car ferry crossing. The first crossing takes only 30 minutes and the ferries run regularly throughout the day. The second one, however, takes 4½ hours, runs only twice a day and requires a reservation about a week in advance. We procrastinated this reservation a bit too long and ended up having to go three days later than we would have liked to. We spent two extra days in Chiloé, which were worthwhile, and two instead of one night in the sleepy town of Hornopirén from where the second ferry departs and where there is not much to do otherwise. About half of the highway between the first ferry and Hornopirén was under construction, which meant that we had to wait for long times at stoplights and drive on rough dirt and gravel roads, a glimpse into the conditions we would encounter further south on the Carretera Austral. 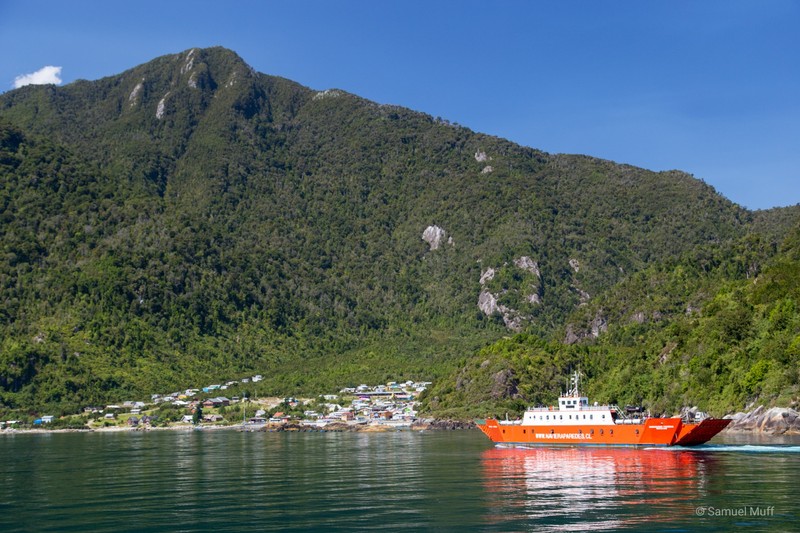 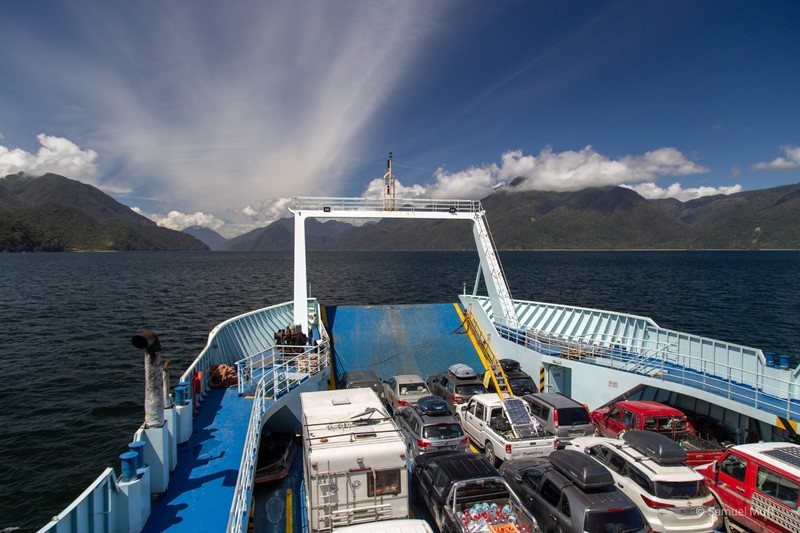 After the long ferry ride, the road was again unpaved for a while. We tried to find a space in one of the official campsites around Volcán Chaitén, but were surprised the find all the decent spots already booked. Despite the difficulty accessing this region, it seemed a lot of people still went there. We finally decided for a wild camping location at the beach of the small hamlet Santa Barbara. The next morning we hiked to Volcán Chaitén, an active volcano that last erupted in 2008. The day was quite cloudy but we could still see a lot of smoke coming out of the ground around the volcanoes peak. 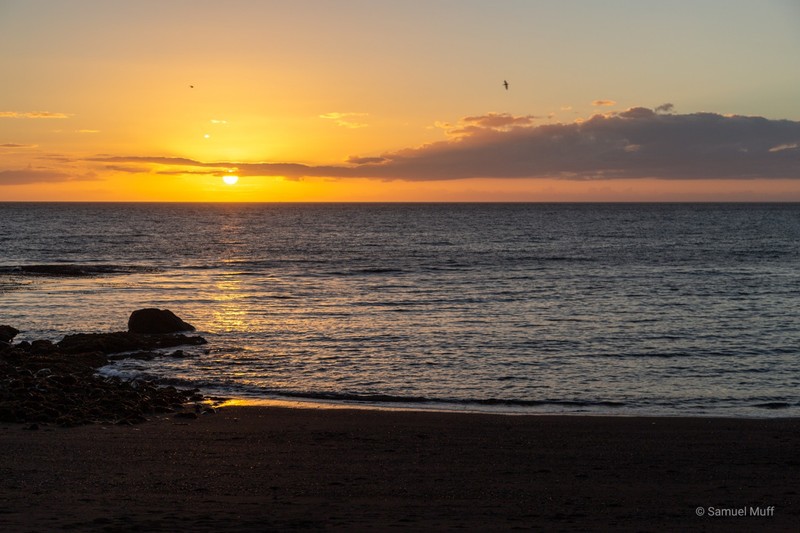 Sunset at the beach in Santa Barbara 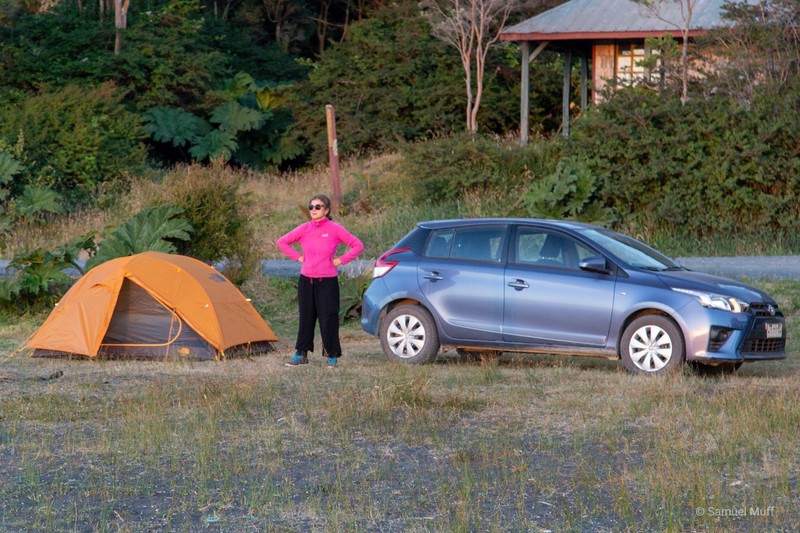 Marta, our car and our tent at the beach in Santa Barbara 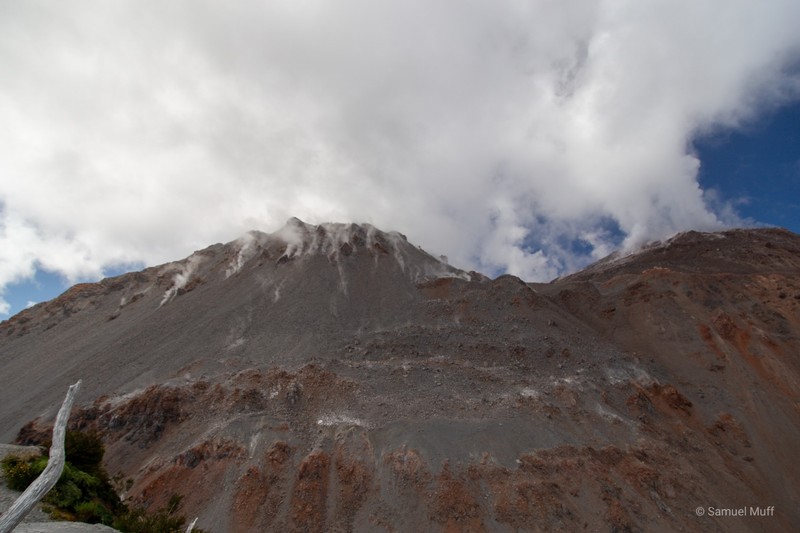 Smoke coming out of Volcán Chaitén 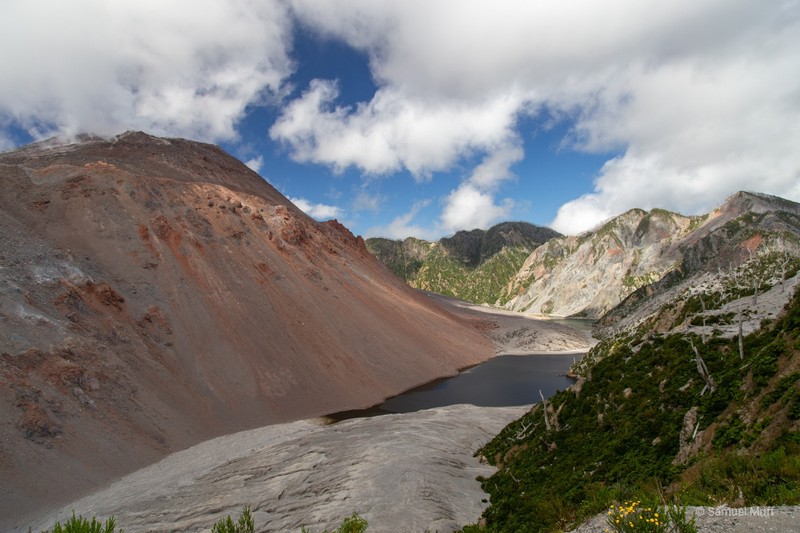 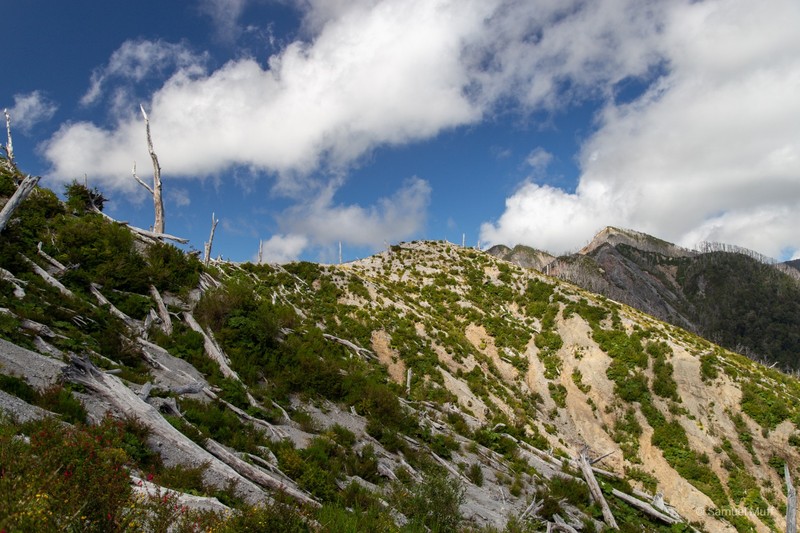 Forest burnt by the heat of Volcán Chaitén

From Santa Barbara onwards, the highway was nicely paved and we were able to cover a lot of distance. Again, we were struggling a bit with finding a suitable campground for the night. When we passed a nice looking fishing lodge near Lago Yelcho and asked if we can pitch our tent on their grounds, they offered us a room for a good price instead. Of course we took the offer and were happy to have a hot shower and a nutritious breakfast. 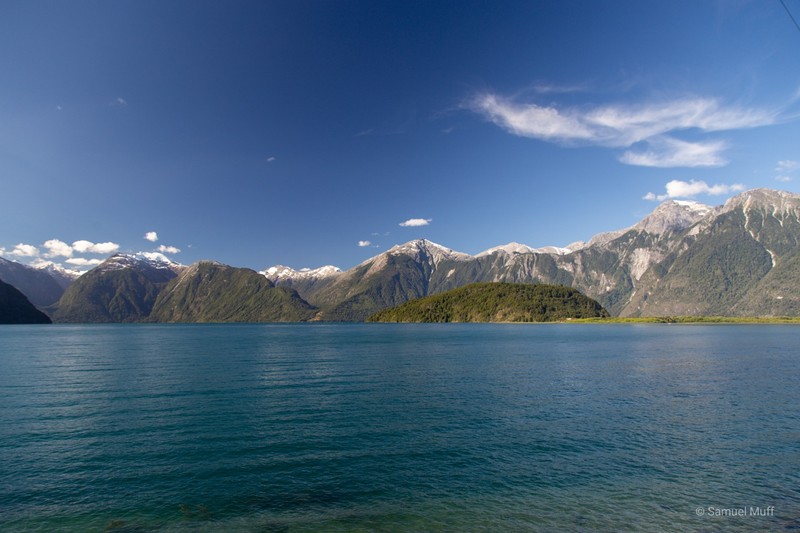 The next day the road followed a nice river all the way to the town of La Junta where we spent the night in a small bungalow. Nights were getting colder now and we were glad to have a wood-fire oven near the bed. Our guidebook mentioned that the only interesting thing about La Junta is that they still have a statue of Pinochet on the Carretera Austral. Some say people in the Aisén region have a rather positive view of the dictator, since he connected them to civilization. However, just on the day we were there, we saw workers take down the dictators monument, pack it in a large black garbage bag and paint over his name.

South of La Junta, we stopped for a while at Parque Nacional Queulat to see the Ventisquero hanging glacier and the large waterfalls emerging from its bottom. We spent another night in our tent a short stretch before Coyhaique. We were lucky to have a sheltered spot as there were strong winds and it was raining throughout most of the night. This would be our last night in the tent for a while, as temperatures continued to drop on the way South. 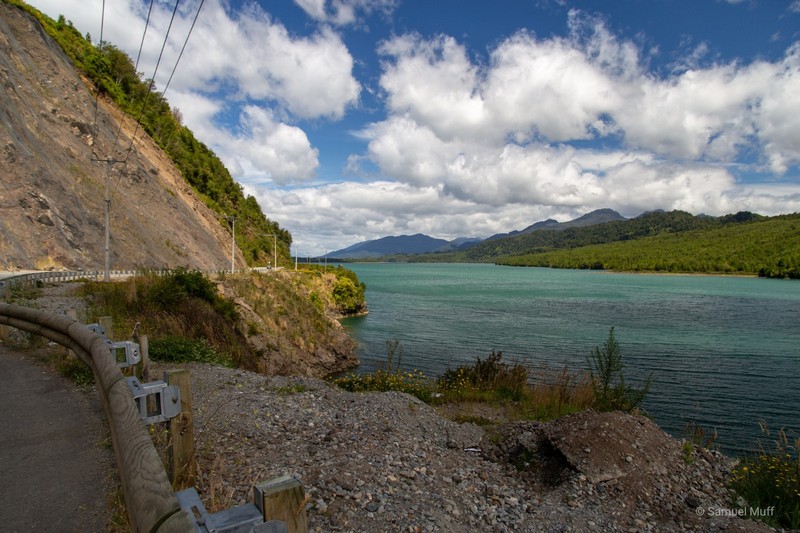 Carretera Austral running along a fjord near Puyuhuapi 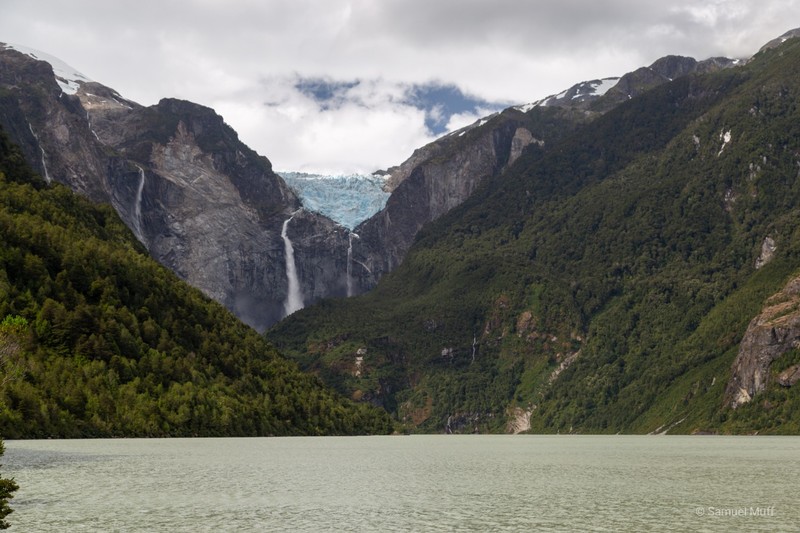 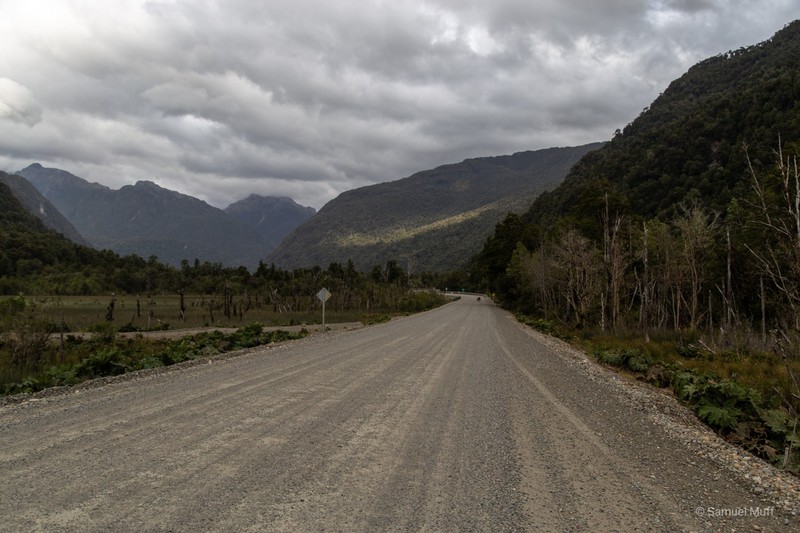 Coyhaique is the largest town in the Aisén region, with more than 50 thousand inhabitants. We spent two nights there and were able to stay with Paola, a friend from Marta’s studies. We used our time there to run some errands like getting a new hair cut for Sam and picking up our permits to cross to Argentina with our rental car. We also did a hike with Paola near the town, which is surrounded by beautiful nature. 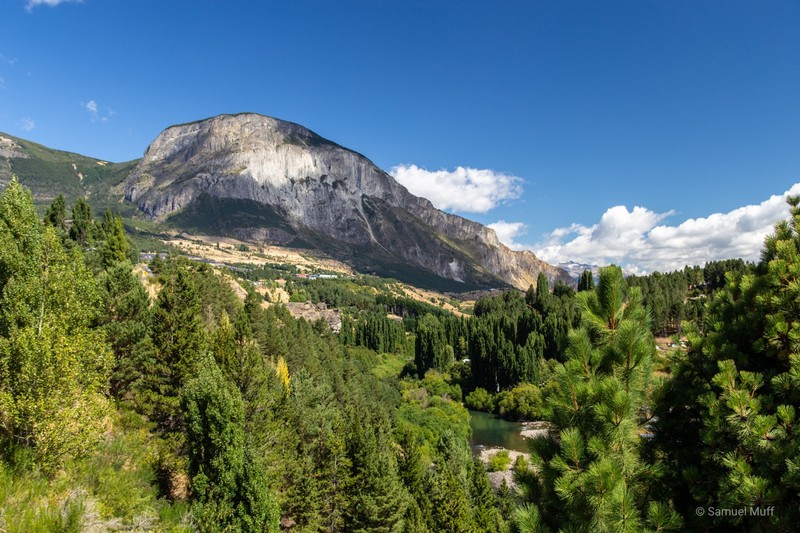 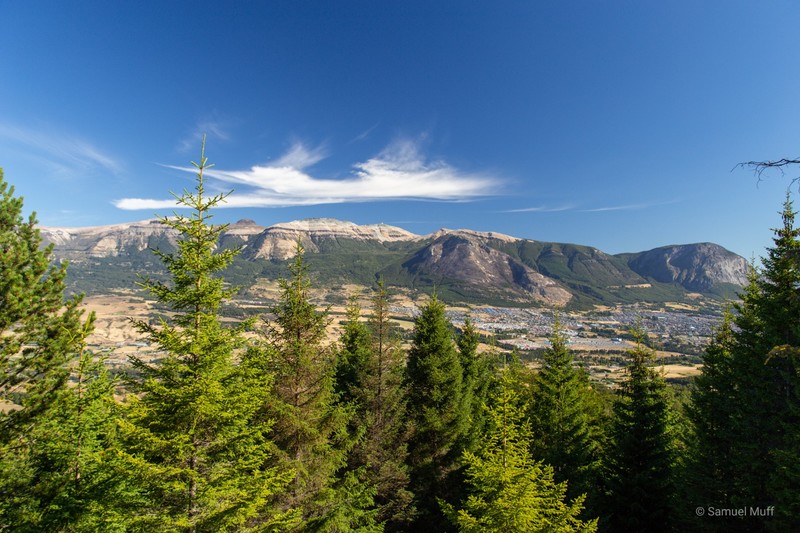 Coyhaique with mountains behind

Posted by samandmarta 12:37 Archived in Chile