Cusco and the Sacred Valley

Hiking and visiting ruins around the Inca capital

We spent six days in Cusco, the former capital of the Inca empire. Cusco is a beautiful mix of colonial and Inca architecture. Especially the historic center, with its many churches and squares is very picturesque. In addition, there are many scenic hikes and fascinating Inca sites to explore in the area around Cusco. While Peruvian food is great in general, we liked it the most in Cusco, where there are many amazing restaurants for reasonable prices. For all those reasons, we found Cusco one of the most worthwhile places to stay on our trip. 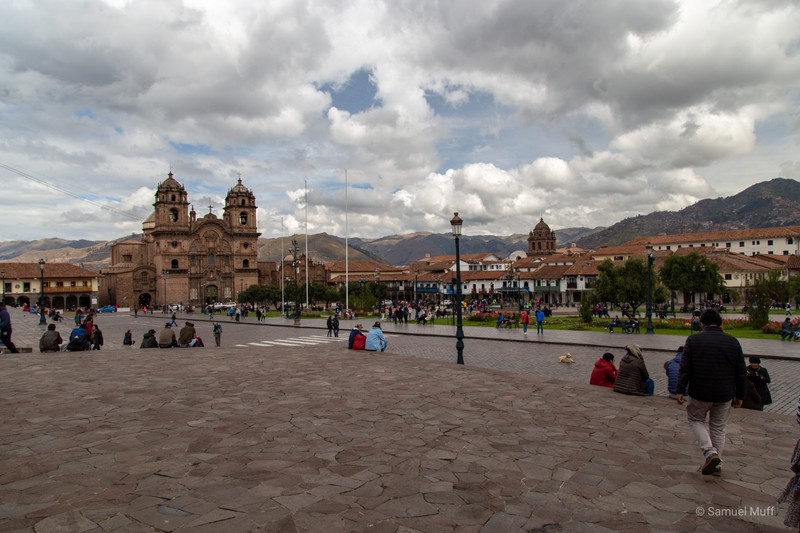 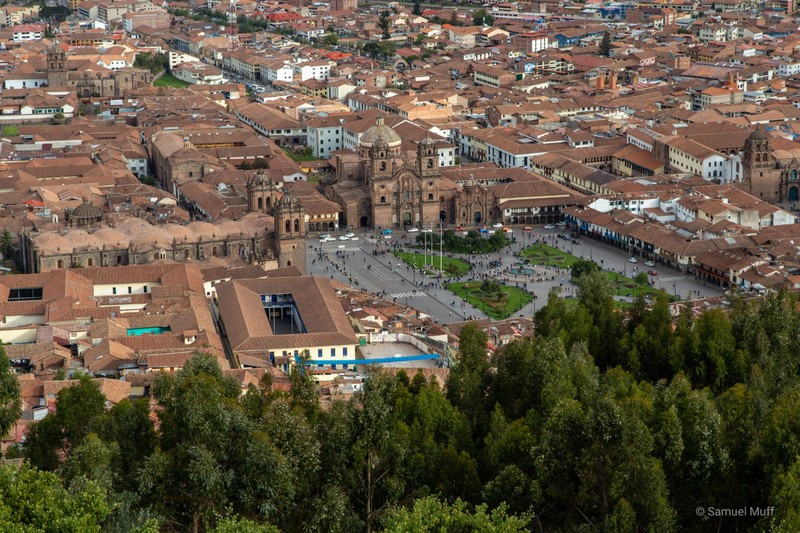 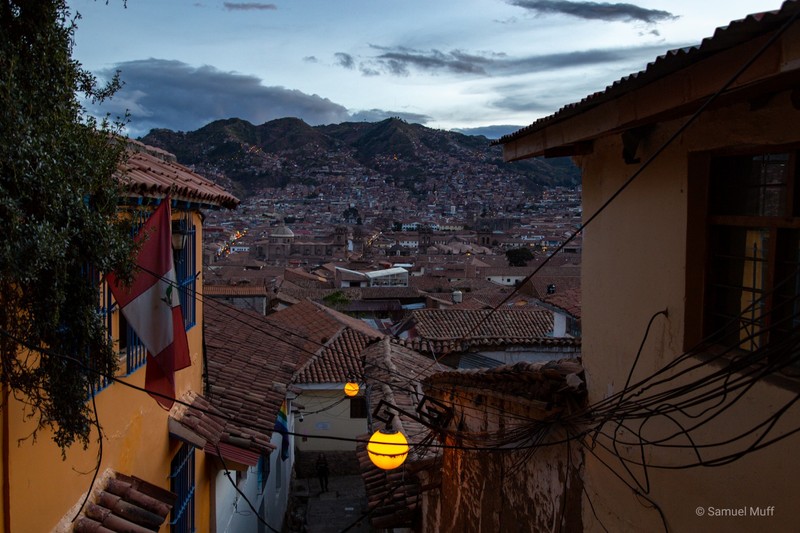 Cusco in the evening from a narrow alley 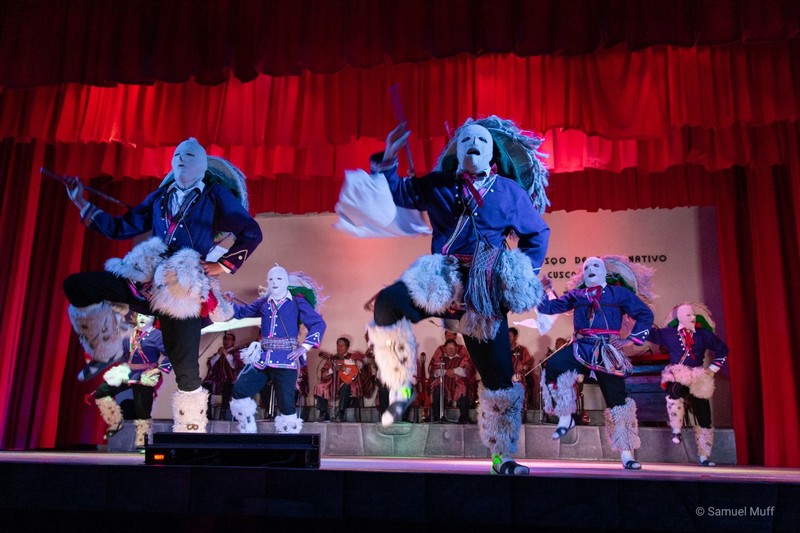 On our first day in Cusco, we started very early to go hiking around Ausangate. Ausangate’s peak is 6’384 meters above sea level, which makes it the highest peak in the Cusco region. As such, the mountain was of great importance to the Incas. The area where we were hiking was spectacular, with many small and intensely blue lagoons dotted around the landscape and several high peaks surrounding us. In fact, this was our favorite hike since leaving Patagonia and the part of the Andes around Cusco was the most scenic one we have seen. During the hike, we passed many herds of alpacas and we even saw one viscacha, the Andean rabbit. 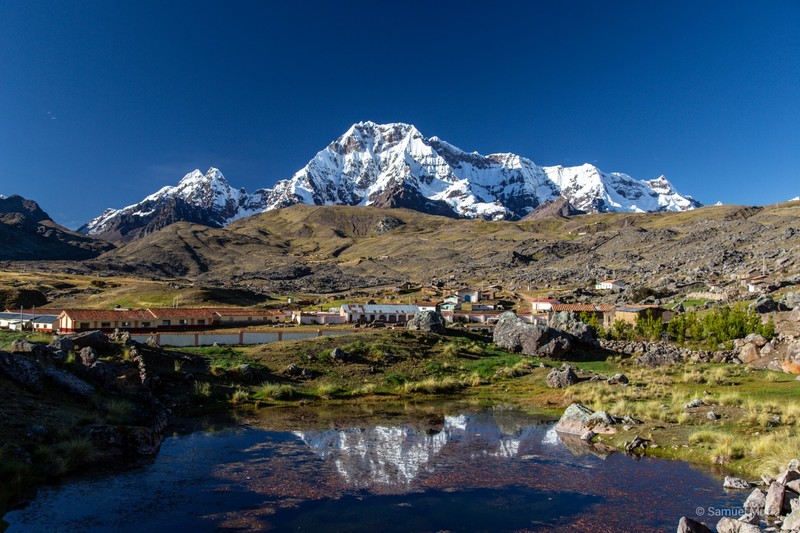 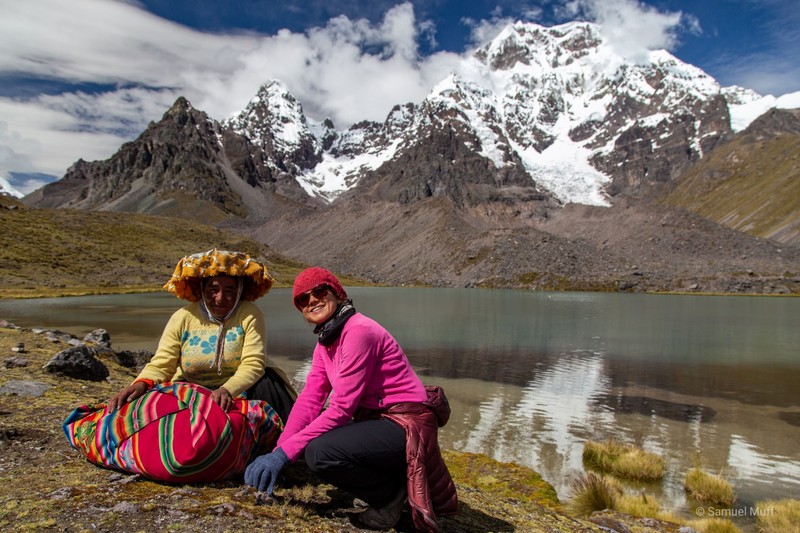 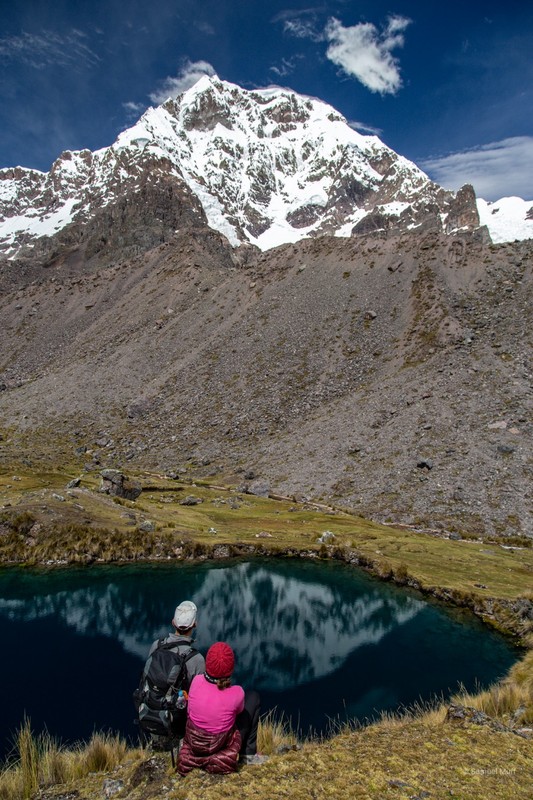 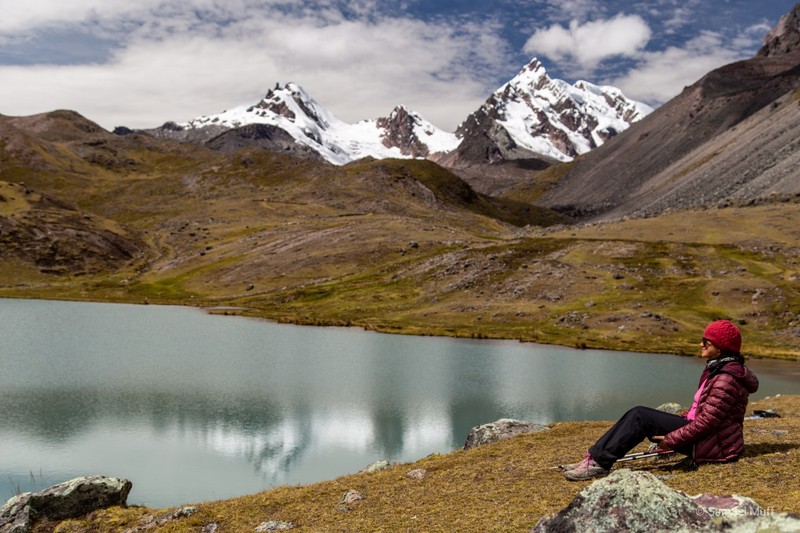 Marta sitting in front of a lagoon and snow-capped mountains 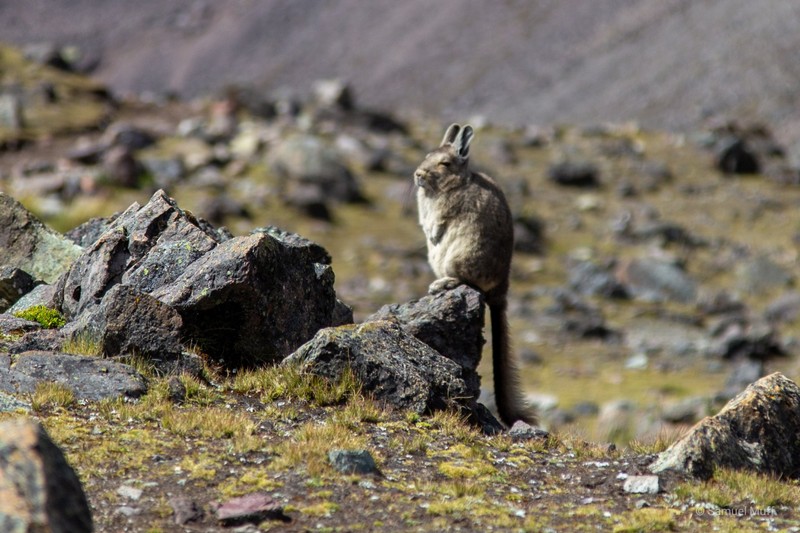 There are several Inca ruins very close to Cusco. We spent one afternoon exploring the ruins to the North of the city. The first three (Tambomachay, Puka Pukara and Q’enqo) were relatively small and insignificant, but the last one we visited was very impressive. Saqsaywaman, often called “sexy woman” for simplicity, was a giant fortress of the Incas that overlooks Cusco. Sadly, after the conquest, the Spaniards took the stones from Saqsaywaman to build their own colonial houses and today, only about 20% of the structures remain. Still, the walls built from gigantic stones, cut precisely to fit on top of each other like puzzle pieces, are a stunning sight. They built their walls without mortar and the stones fit so tightly that not even a piece of paper could be fitted in-between. 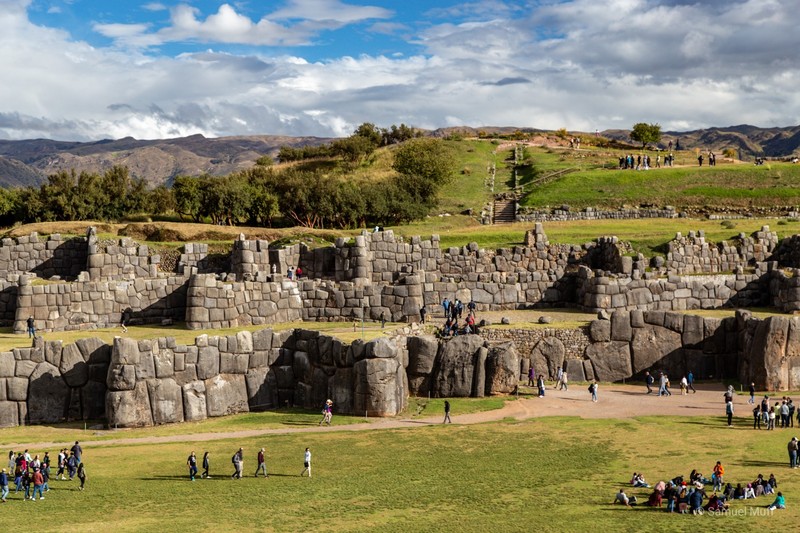 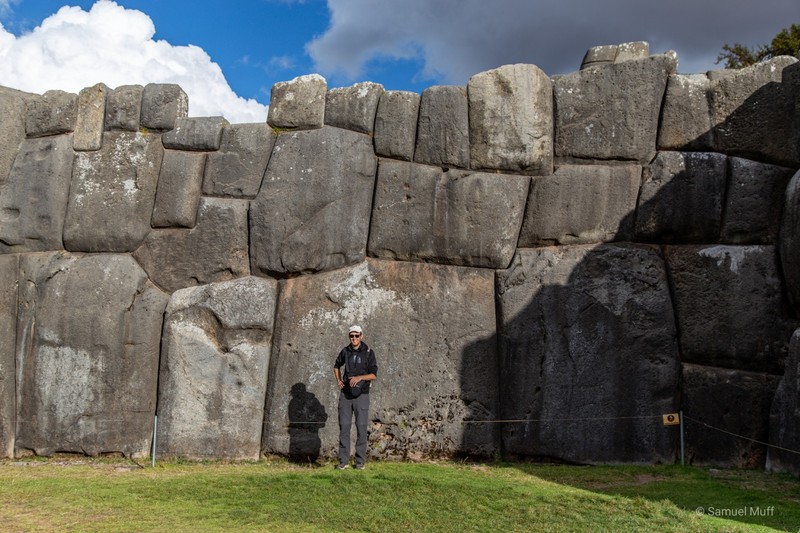 Sam in front of an Inca stone wall in Saqsaywaman 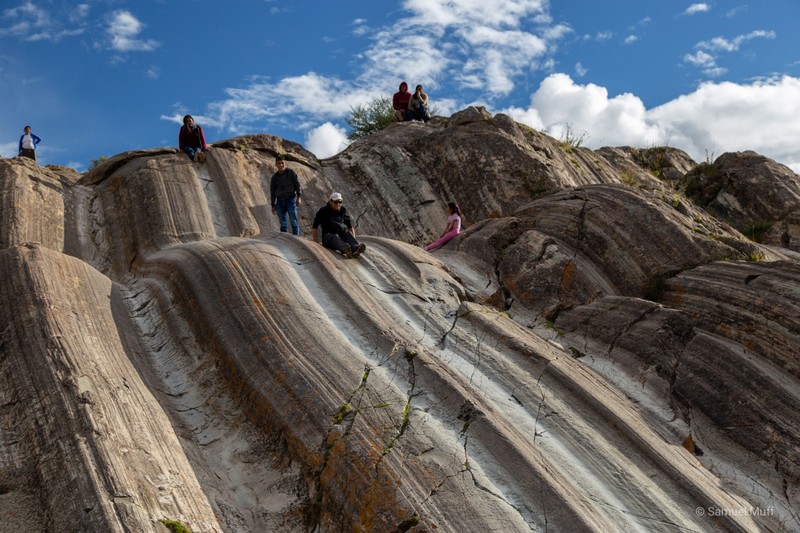 Sam sliding down a rock in Saqsaywaman 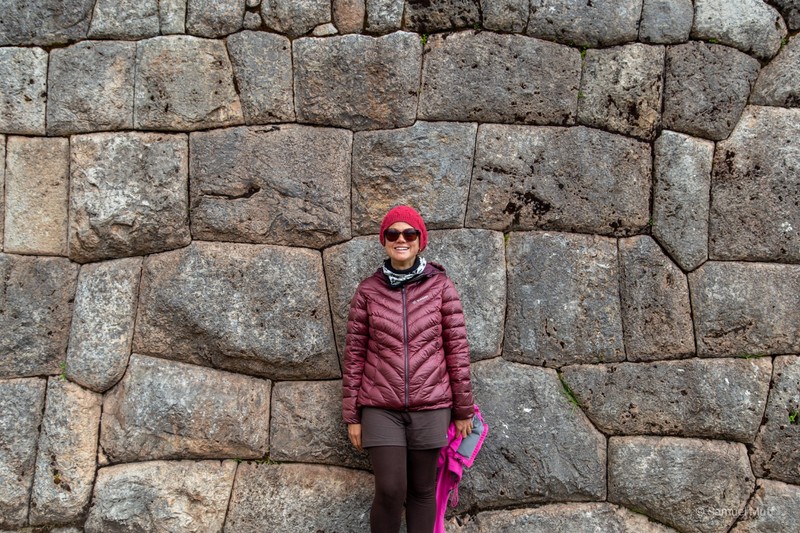 Marta in front of an Inca stone wall in Puka Pukara

A bit farther away from Cusco, at the entrance to the Sacred Valley lies Pisac, another great Inca site. The Pisac site consists of several different ruins in different parts of a steep hill above the namesake village. Since the highest site is more than 500 meters above the village, we took a taxi to the top and walked down to the village from there. Pisac is notable for the huge terraces that the Incas have built into the hill to increase agricultural production. It is hard to imagine what an effort the construction of those terraces must have been without the help of machines. Another interesting aspect is the water distribution system. There are many water channels throughout the site, connecting to natural streams to provide running water. We found it amazing that the water still moves through those channels to this day. 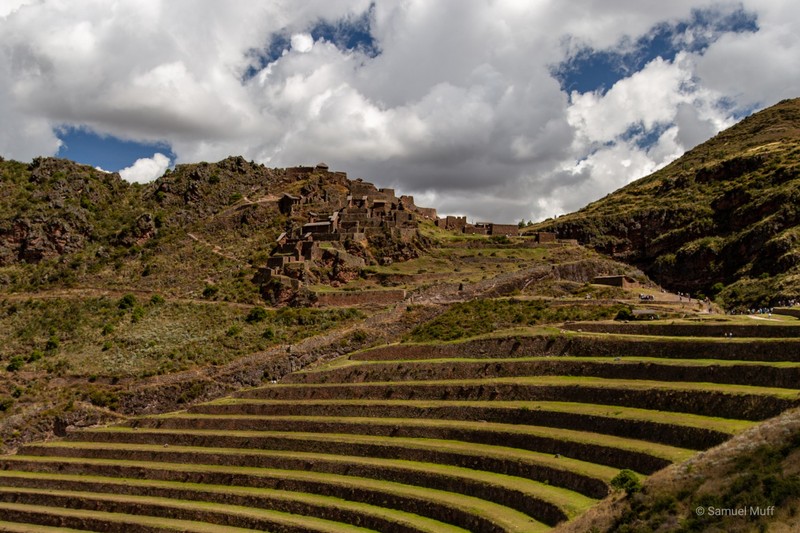 Terraces and ruins at the Inca site in Pisac 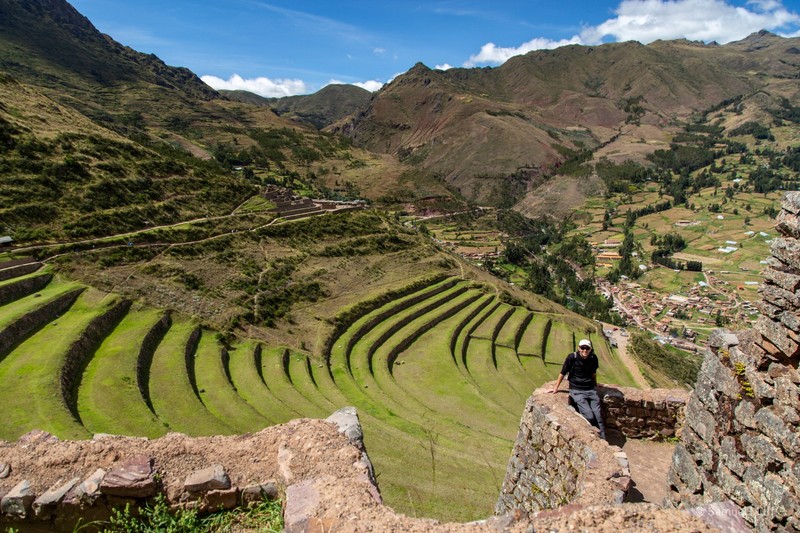 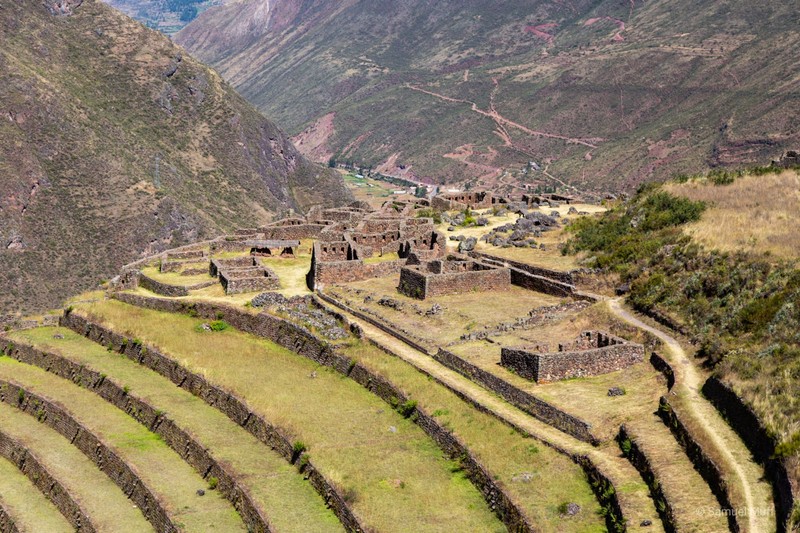 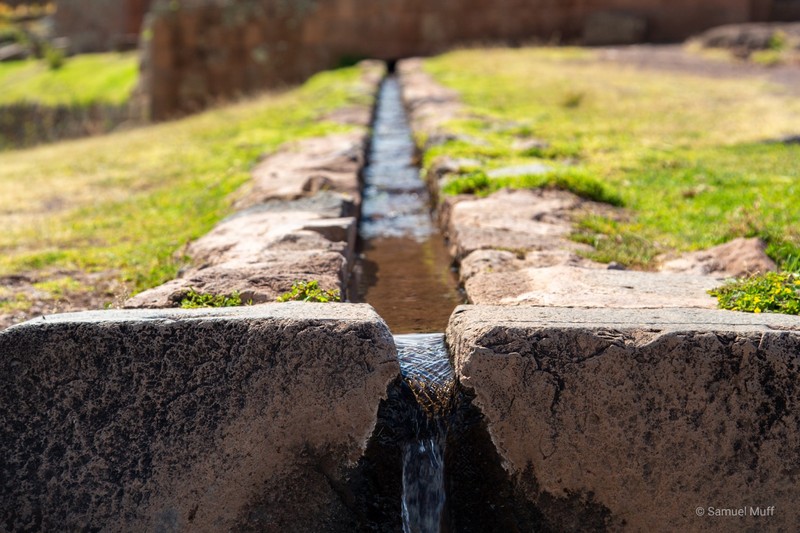 Still functioning water channel at the Inca ruins of Pisac

On our last day in Cusco, we joined a day tour to Vinicunca, better known as the Rainbow Mountain. To see the beautifully colored mountain, we had to climb beyond 5’000 meters for one last time on our trip. Interestingly, the differently colored layers are sedimentary layers, from when this entire area was below the ocean millions of years ago. Since then, plate tectonics have lifted the mountain up more than 5 kilometers. Besides the Rainbow Mountain, there were also great views of Ausangate in the other direction. After the Rainbow Mountain, we returned by hiking through the Red Valley. We were very surprised that hardly any of the hundreds of people who took the long trip from Cusco chose to walk the 10 extra minutes to the Red Valley. While the Rainbow Mountain was very crowded, the Red Valley was empty. We enjoyed our 2-hour hike through the valley a lot. It was very peaceful and we found the scenery to be even better then Rainbow Mountain. We also saw vicuñas running through the red sands and alpacas feeding on the green patches. 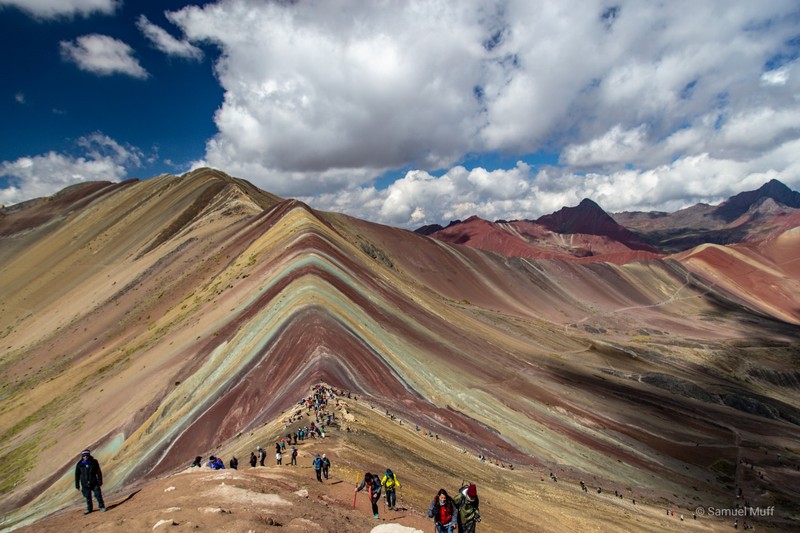 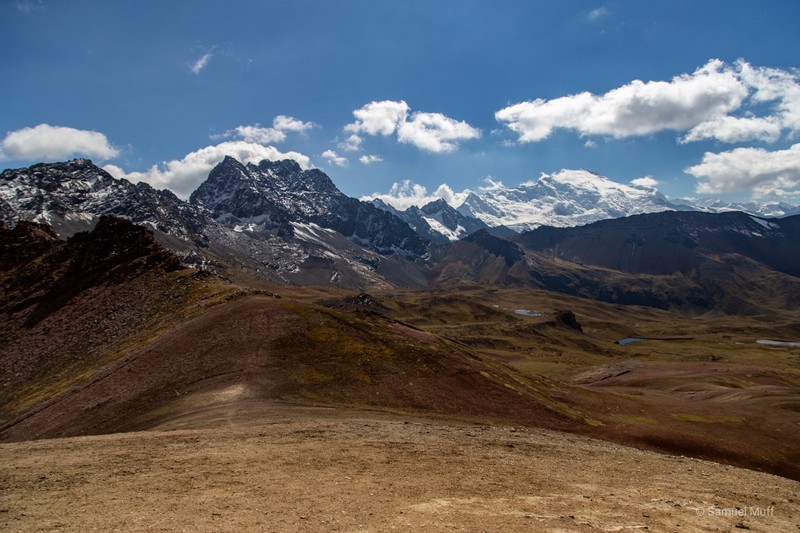 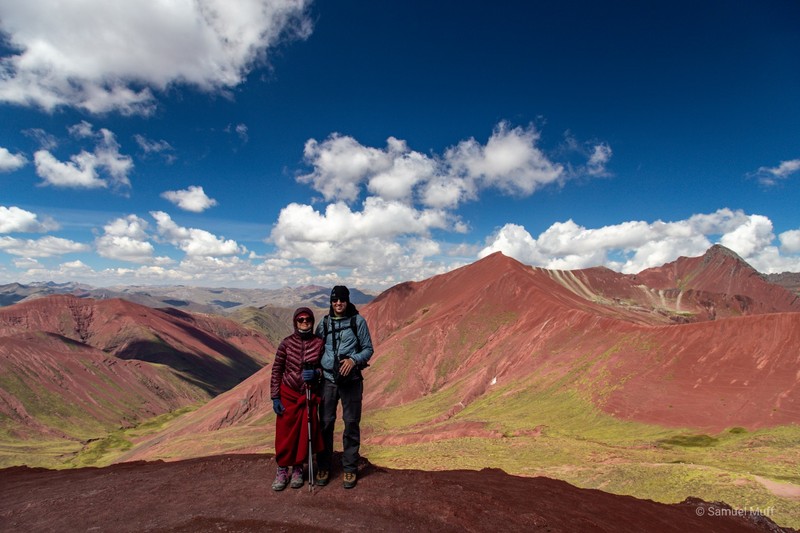 Sam and Marta in the Red Valley 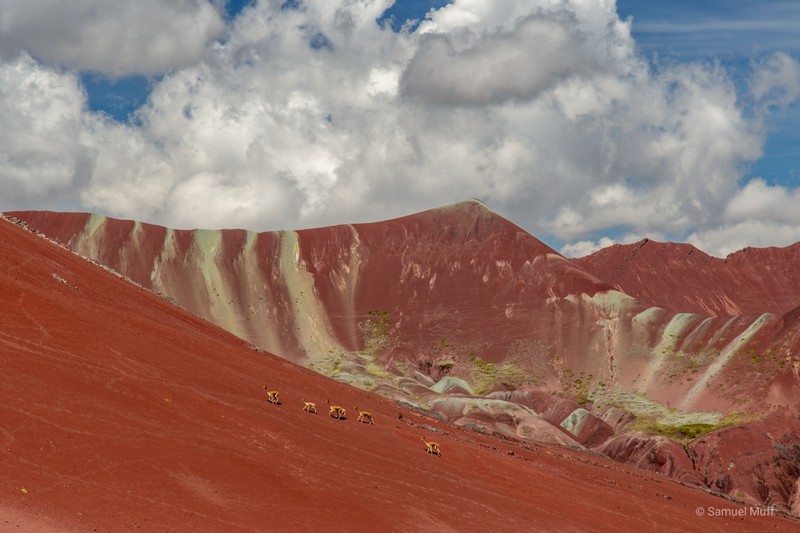 Vicuñas running up a mountain in the Red Valley

Alpacas are abundant in the Peruvian Andes. The alpaca is the last of the four camelid species endemic to South America that we saw. We found them to be the cutest of the four, because they have such wooly faces. Like llamas, they are domesticated animals and we always saw them in herds. They were specifically bred for their wool, which is finer than that of llamas, but still not as luxurious as the one of the vicuña. 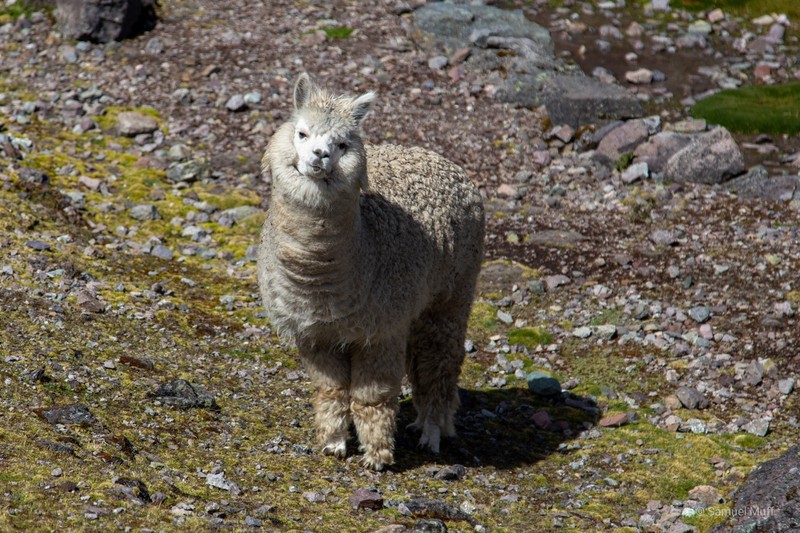 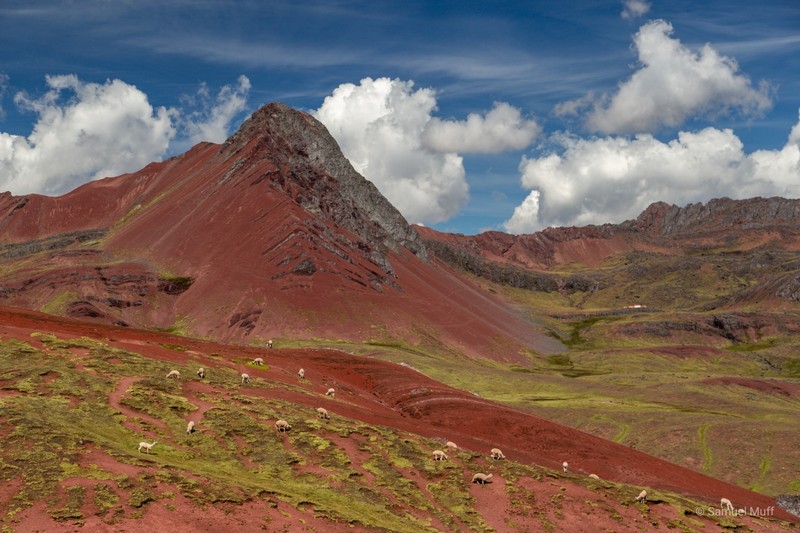 Alpacas in the Red Valley

Posted by samandmarta 18:49 Archived in Peru