It was apparent that we got back into the first world, when a friendly robot greeted us at Incheon airport. Our night on the plane from Bangkok has been short and so we retreated to our hotel to rest and make some plans for the next weeks of travel. In the evening, we met Sang Hyeon, Marta’s friend from her PhD studies, for dinner. We got a great first taste of the Korean cuisine as he invited us to a fantastic restaurant where we were able to taste about a dozen different dishes. 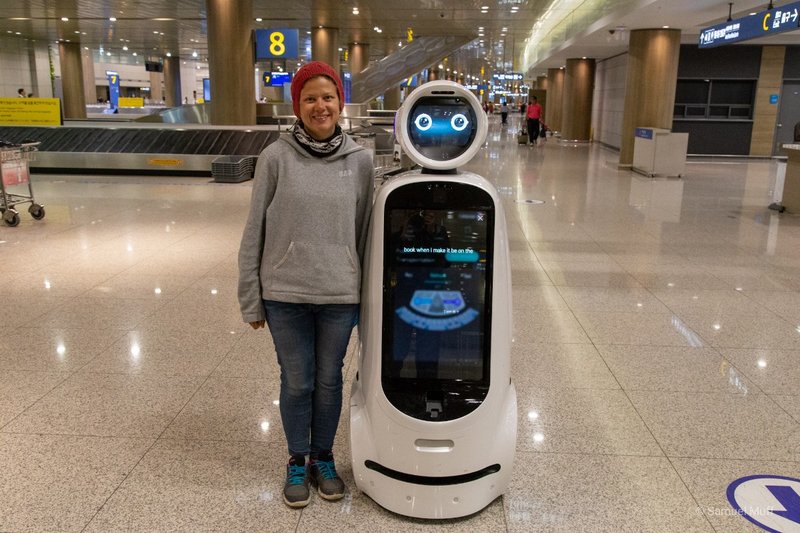 The next day we visited Gyeongbok palace, the residence of Korean emperors for many centuries. It was amusing to watch the change of the guards in front of the gate, despite the fact it is just an act for tourists nowadays. The palace was like a smaller but more pretty version of the Forbidden City in Beijing. It offered not only beautiful buildings, but also lots of trees in bright autumn colors. The traditional Korean houses differ from their Chinese counterparts most notably in the shape of their roofs, which curve up towards the edges. This palace is also the place where the Korean script was invented. Unlike the roofs of the buildings, the Korean characters are very geometrical, consisting mostly of straight lines, right angles and circles. Our tour guide explained, that a smart person can learn to pronounce every Korean character in a day, since the shape of a character is directly related to its pronunciation. 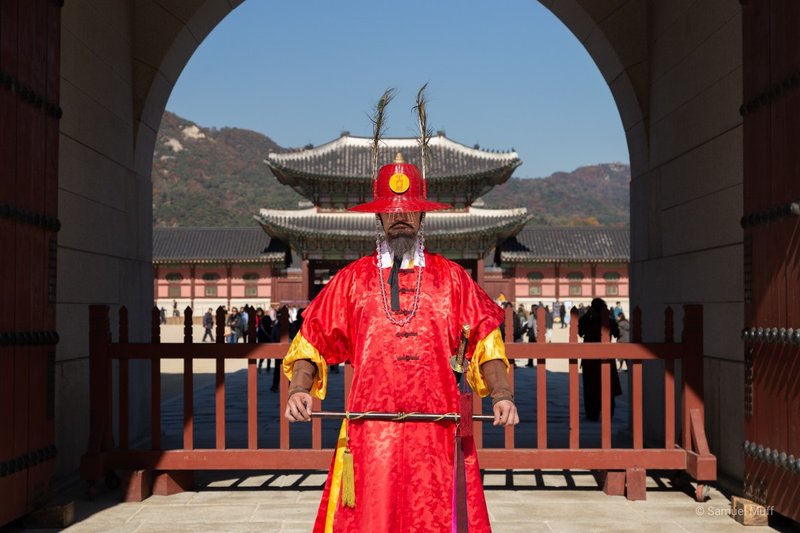 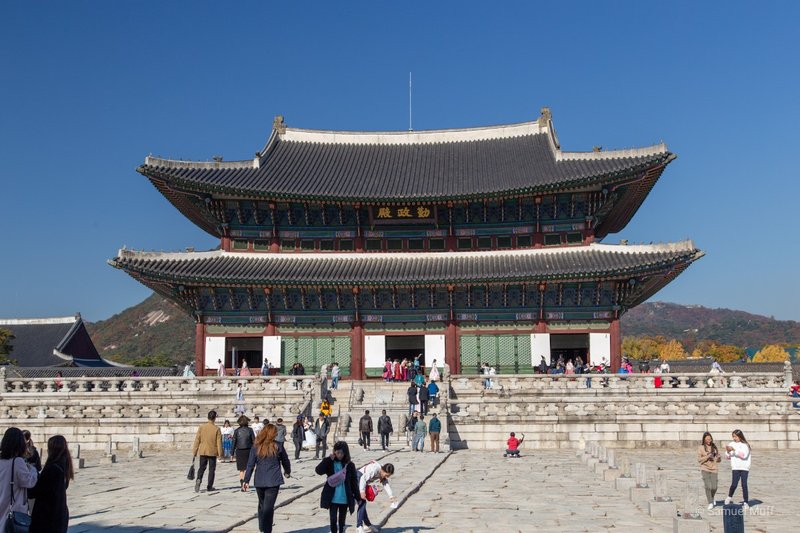 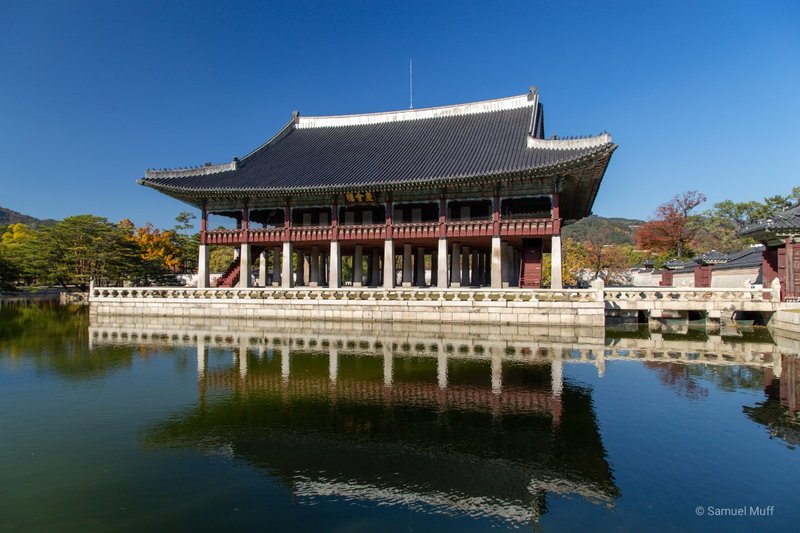 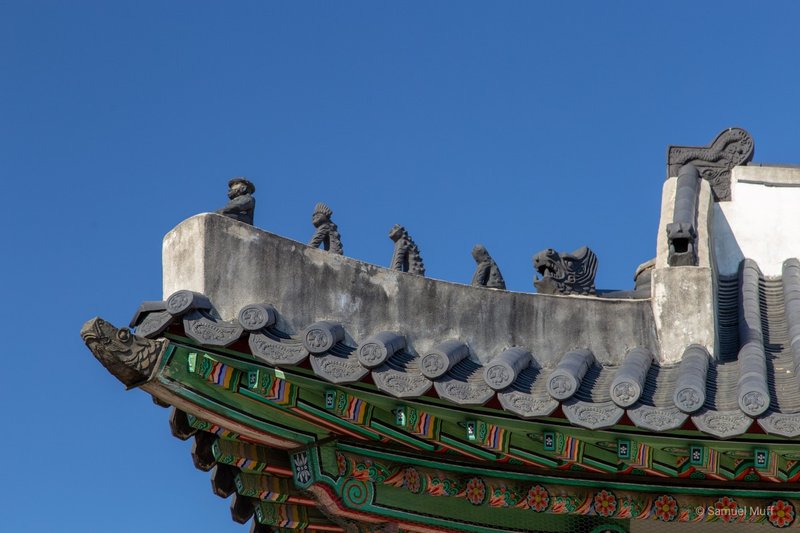 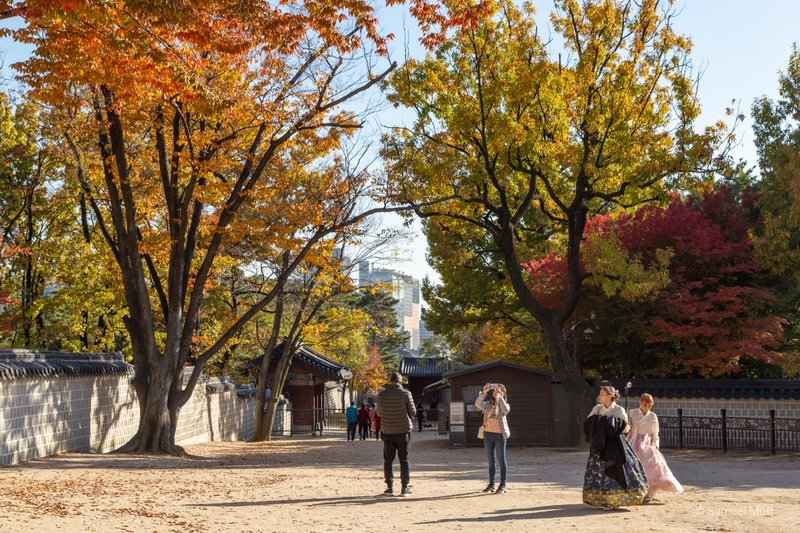 Upon leaving the palace, we witnessed a demonstration for peace on the Korean peninsula. Surprisingly, the event had similarities to a carnival, as many demonstrators wore costumes, danced and played instruments. 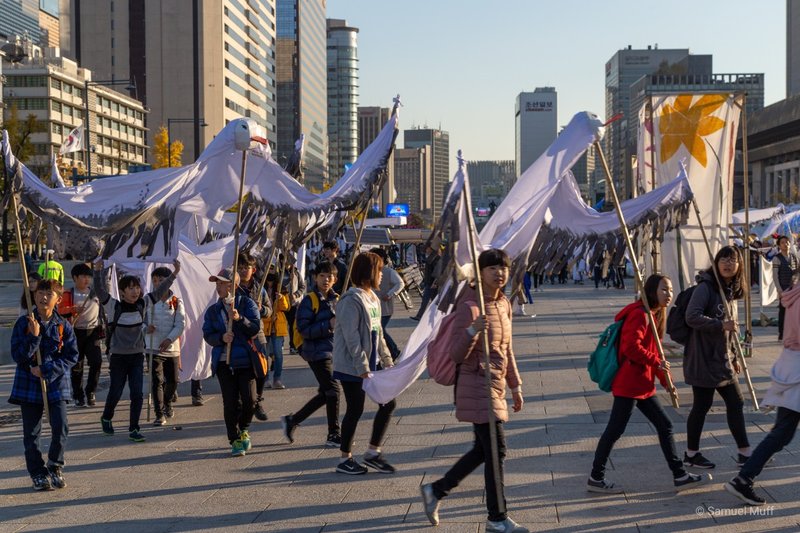 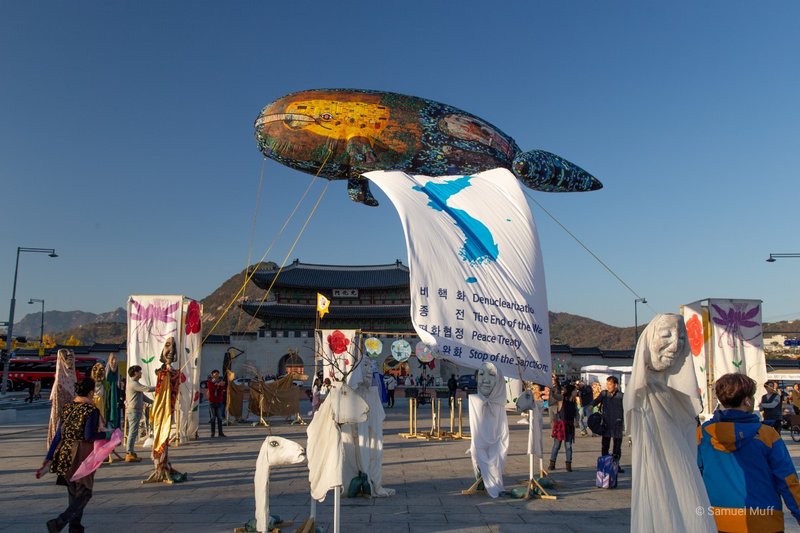 Just north of the city and easily accessible by public transport, Bukhansan National Park is the most popular getaway for Seoul’s nature-loving residents. We decided to hike to the park’s highest peak, Baegundae, to get the best city views. Hiking is very popular in South Korea, so despite the fact that it was a weekday, the park was full of fit Koreans of all ages. The well-marked path led us along rivers and through the forest in its most photogenic colors. For the last 15 minutes, the path became quite difficult. We had to use ropes to climb up the steep rock face to the top. The main part of the city was hardly visible unfortunately, but the hike was still worthwhile due to the beautiful colors of the forest. 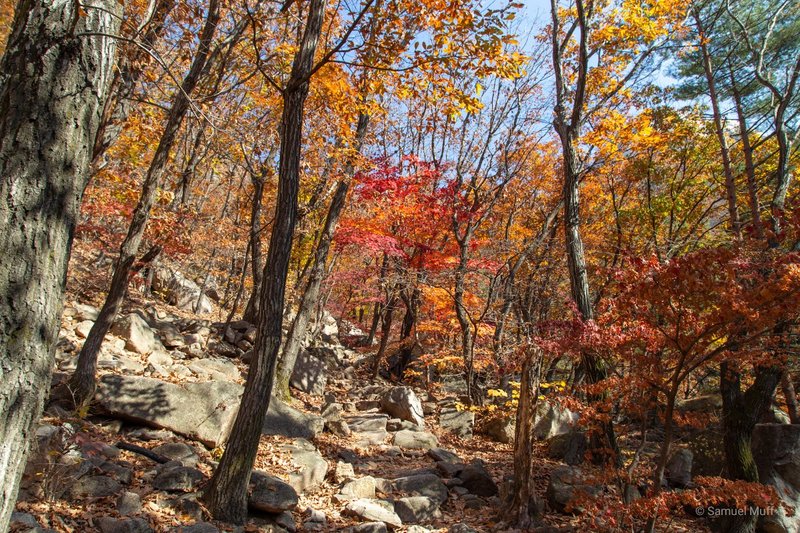 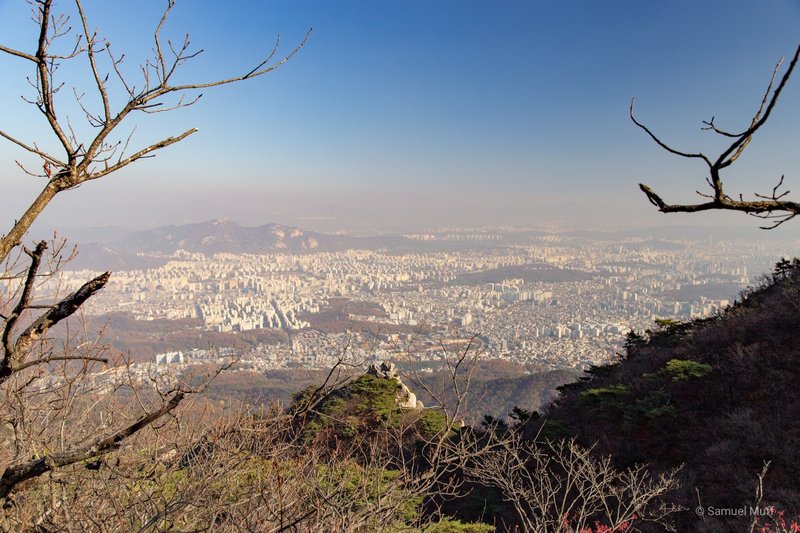 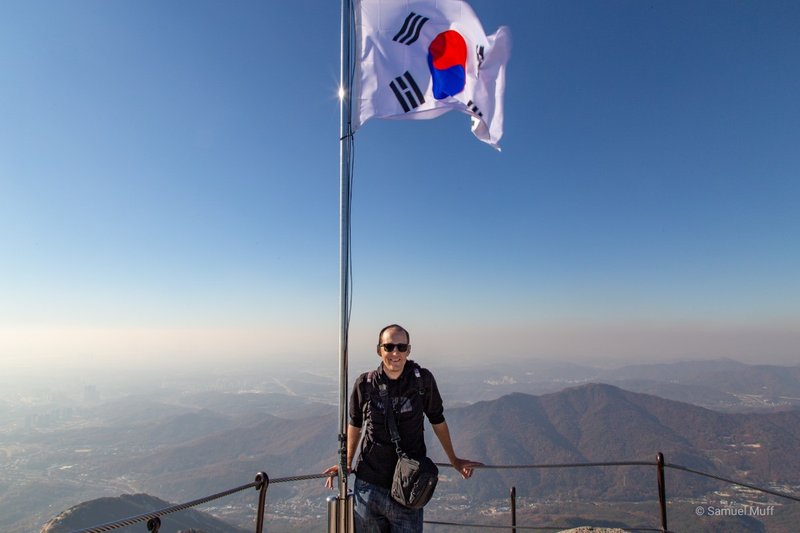 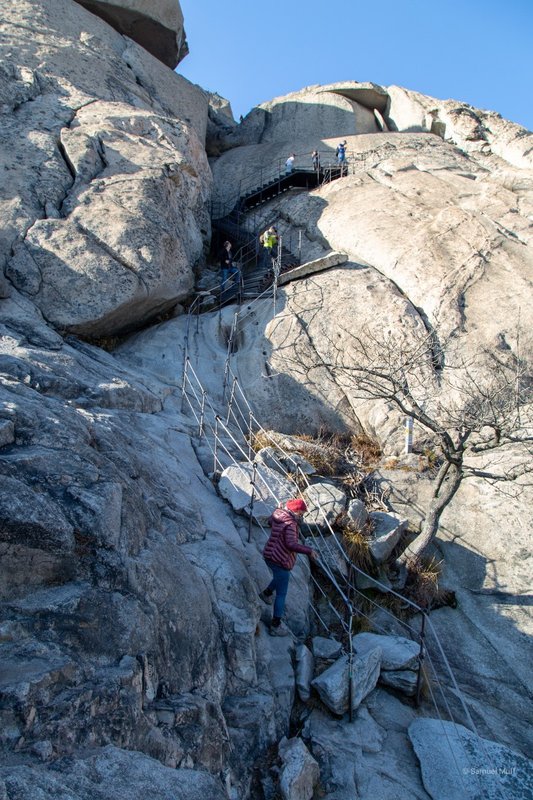 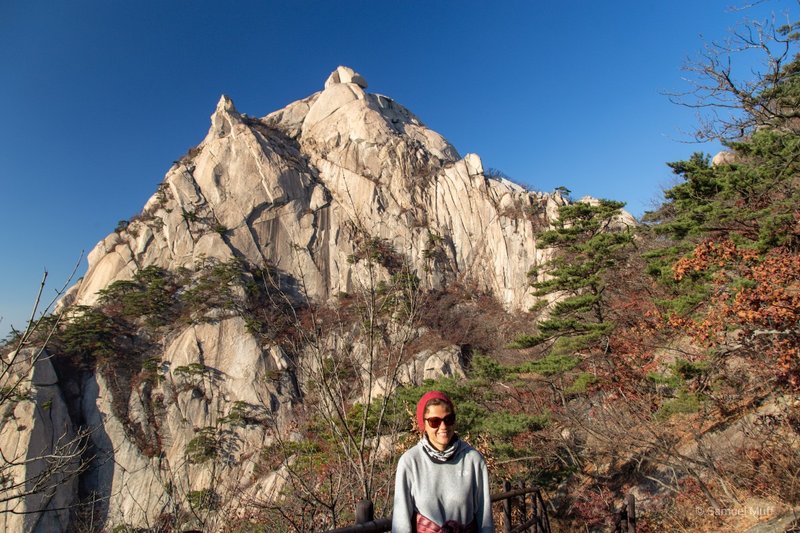 In the evening, we went to see a “Nanta” show. The popular Korean production is probably best described as Blue Men Group in the kitchen. The actors use food and kitchen utensils to make music and do acrobatic stunts. However, the slapstick humor was a bit lost on us.

On our fourth and last day in Seoul, we visited Jogyesa Temple. There was a special festival happening and the area around the temple was filled with stunning flower displays in the shape of various animals and religious figures. Later, we visited a street with traditional Korean houses (Hanok Village) and the War Memorial of Korea. The latter is one of the best museums we have ever seen. Outdoors, it exhibits hundreds of real vehicles and devices used in the Korean wars, like airplanes, tanks, destroyers, missile launch systems and much more. Inside, there are many impressive video installations that show the difficult history of Korea in a very approachable way. 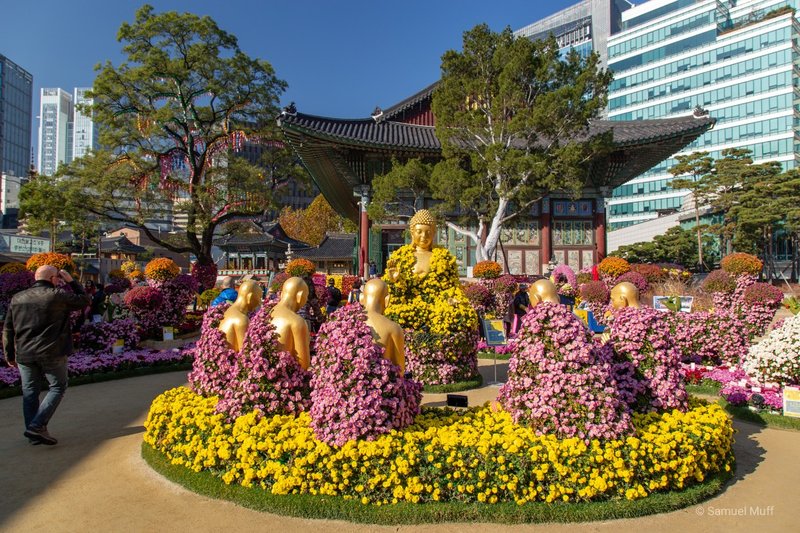 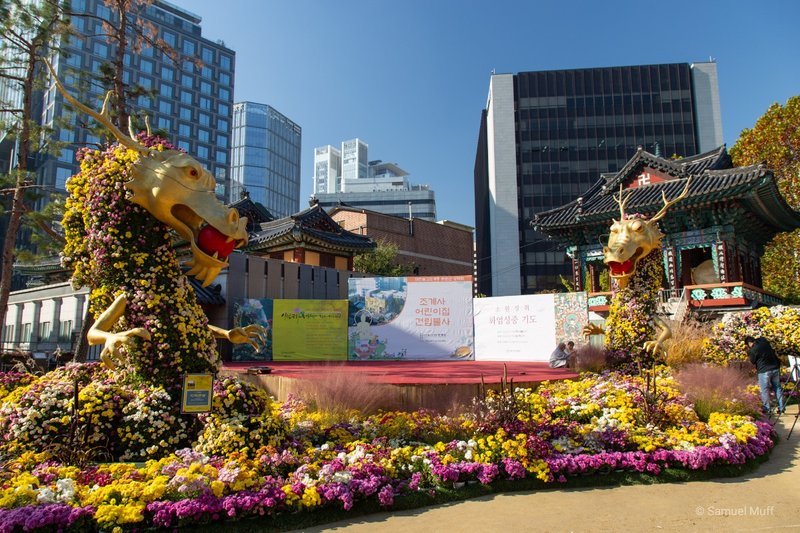 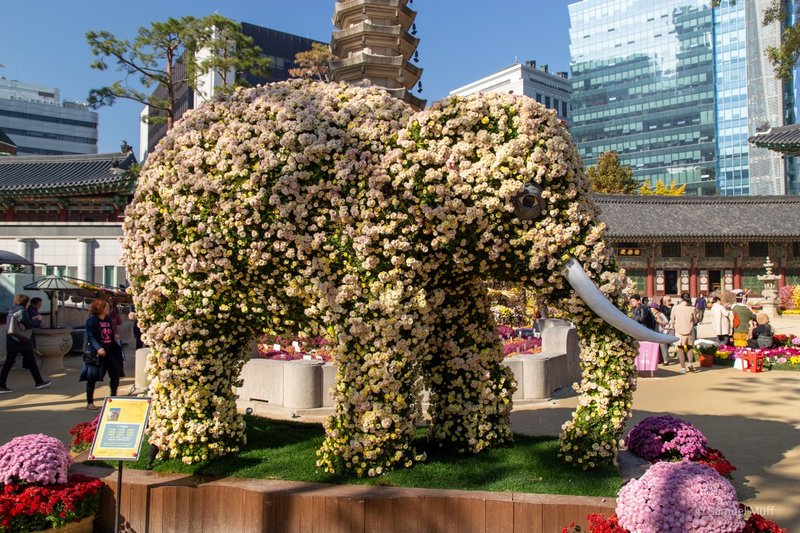 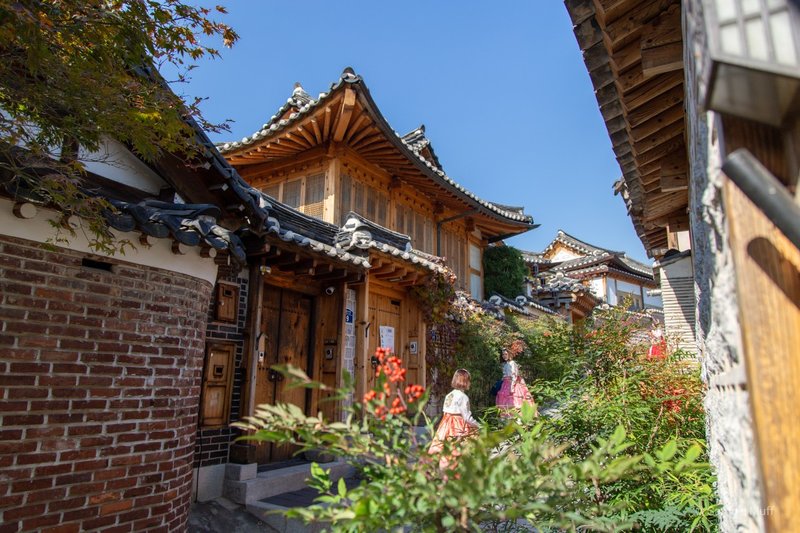 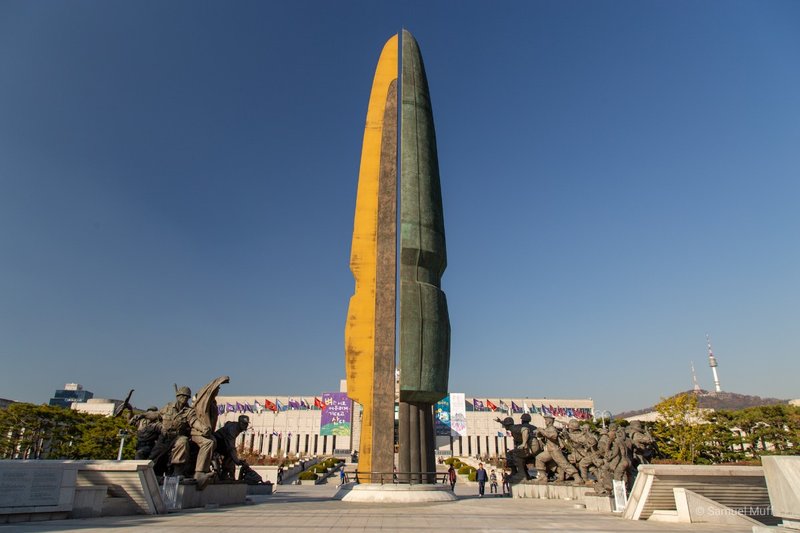 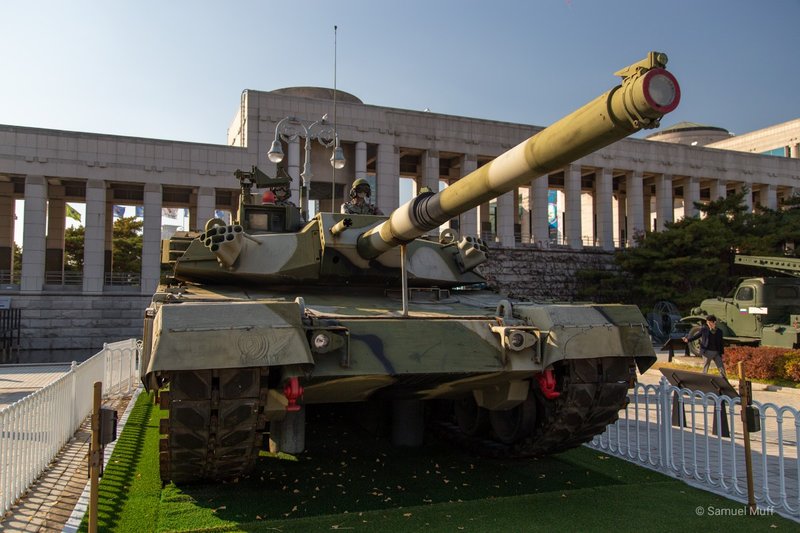 The Han river cruise we attended in the evening was a bit disappointing. Seoul is a huge city with no clear center so its skyline is not as impressive as for example Shanghai’s. Also, our boat was crowded with people which made it difficult to enjoy the cruise. We came to the conclusion that every attraction in Seoul that costs more than 5$ is not worth it. There is an abundance of great sights in this city that cost little or nothing and one should stick to them. 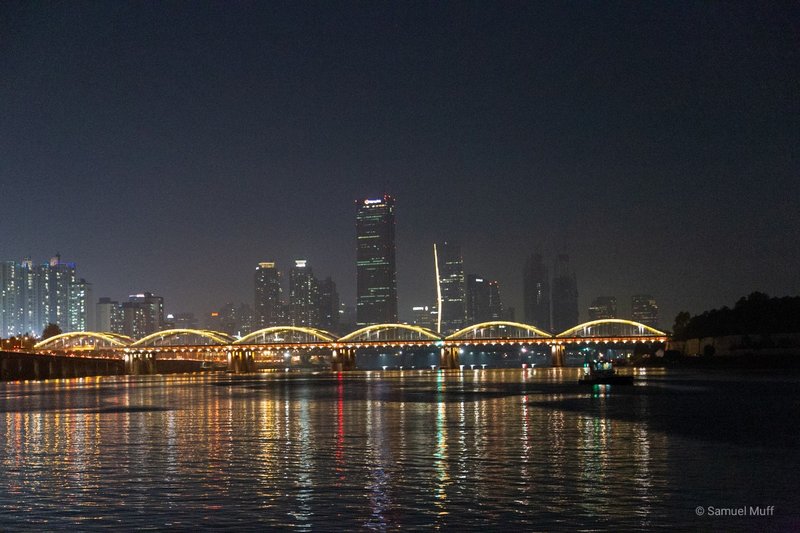 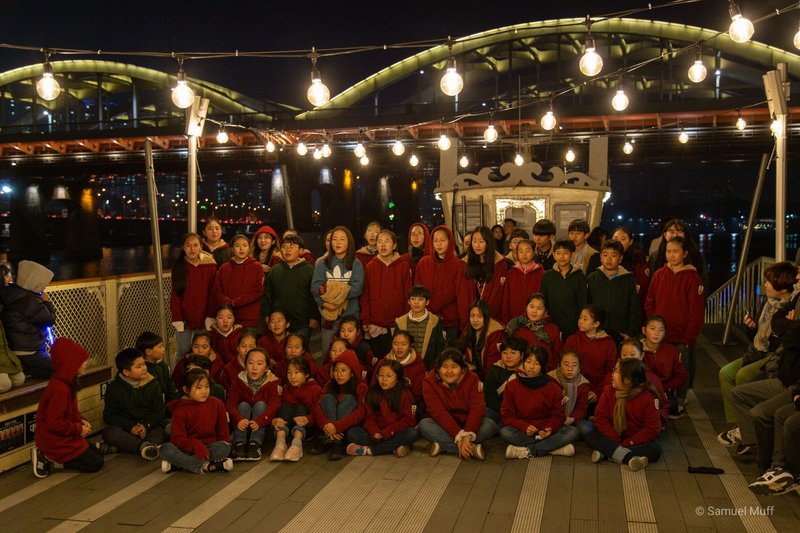 The next morning we took the train to Busan. South Korea’s second largest city is located at the seaside in the south-east of the country. After more than 3 months of travelling, we witnessed the first sunset over the sea at Dadaepo Beach in the south of the city. 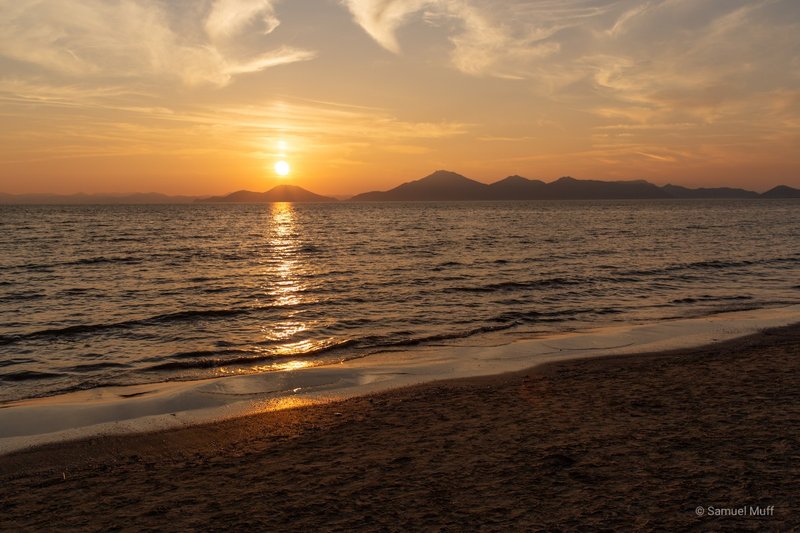 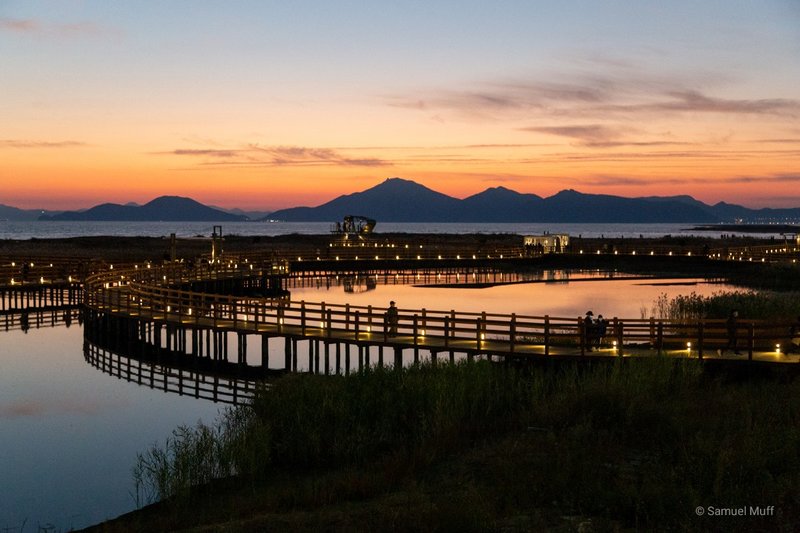 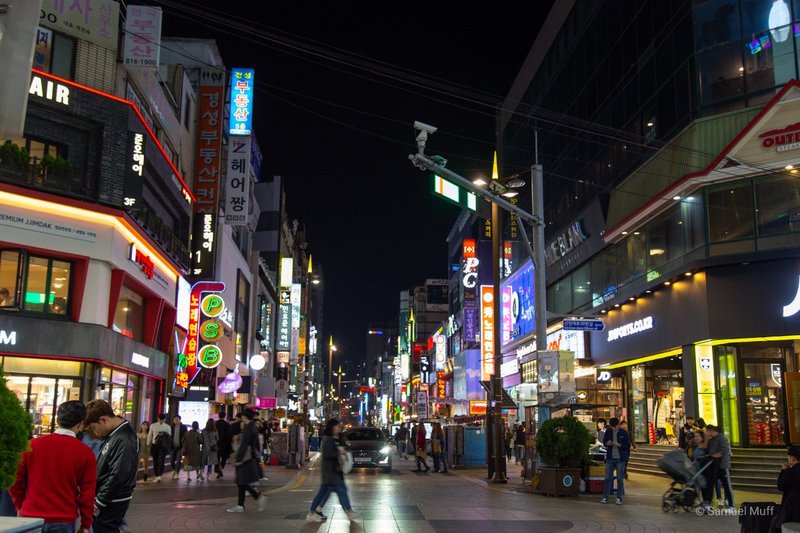 We visited some Buddhist temples on our last day in South Korea. Beomeosa Temple was located on a hill amidst a colorful forest, whilst Yonggungsa Temple was directly at the seaside. In the evening we left Busan by ferry towards Fukuoka in Japan. Travelling by ferry proved to be much more comfortable than by airplane or by train. We had a reasonably sized room with two proper beds. A boat also moves much softer and quieter than trains and planes, so we were able to have a really good sleep on the way to Japan. 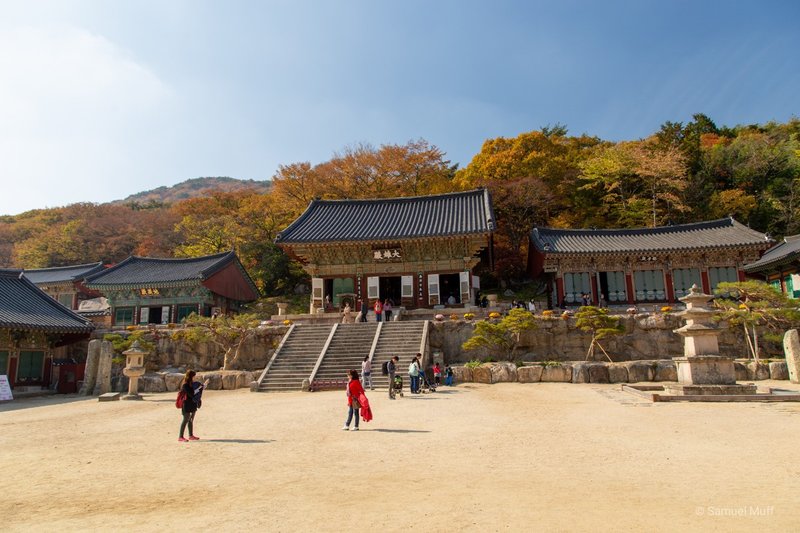 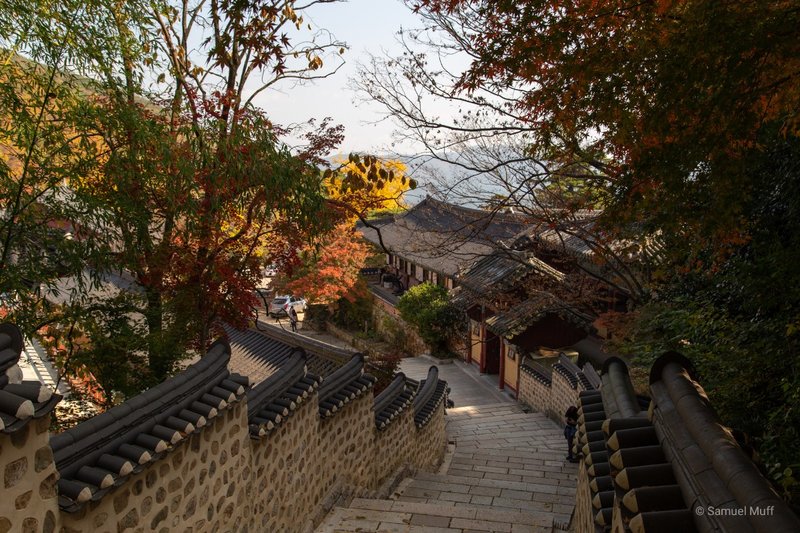 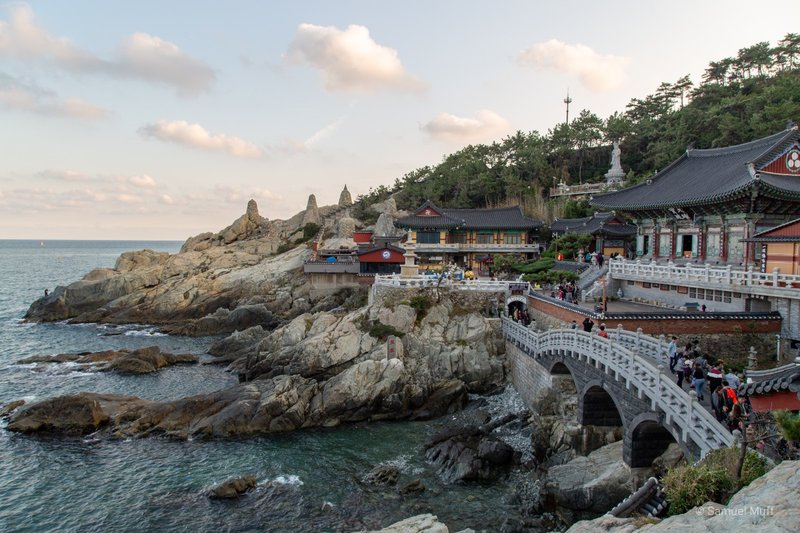 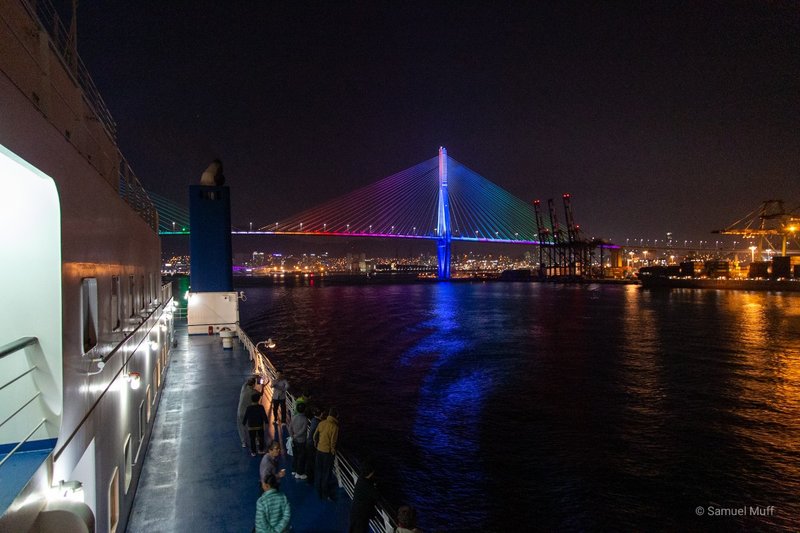