Brazil is by far the largest country in South America, but we chose not to spend a lot of time there on our journey through the continent. One reason is that the country is a high-risk region for many mosquito-born diseases and we try to avoid those areas. Another reason is that we already made an effort to learn Spanish, which is of little help in Brazil where Portuguese is the official language. Lastly, we feel there is enough to see and do on the rest of the continent to utilize our six months here. With that being said, we could not leave South America without visiting its most famous city, Rio de Janeiro.

We arrived to Rio by plane from Montevideo, with a stopover in Porto Alegre. For five nights, we stayed at a nice hotel directly at the Copacabana. There were fantastic views of this iconic beach from the rooftop pool of our hotel. During our time in Rio, we focused more on relaxing at the beach or swimming in the sea than on sightseeing. The Copacabana was right on our doorstep, so we spent most of our time there. It is a fantastic beach, long and wide with fine white sand. 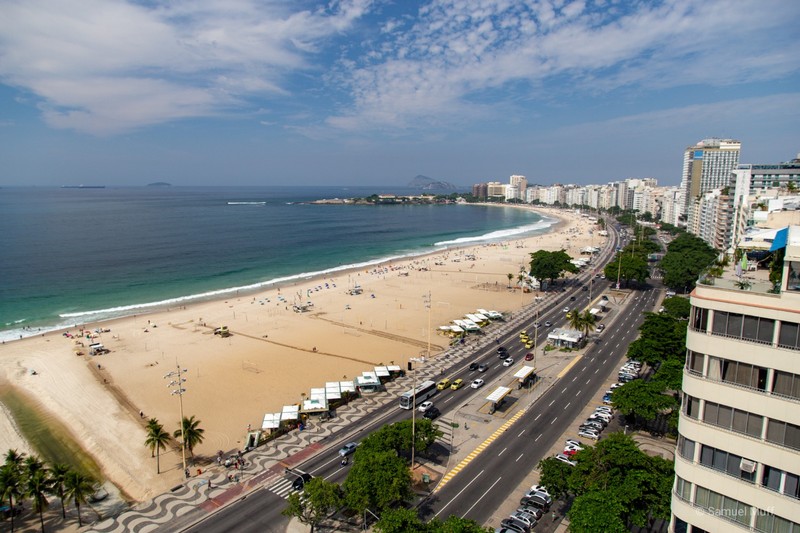 Copacabana, seen from the rooftop of our hotel 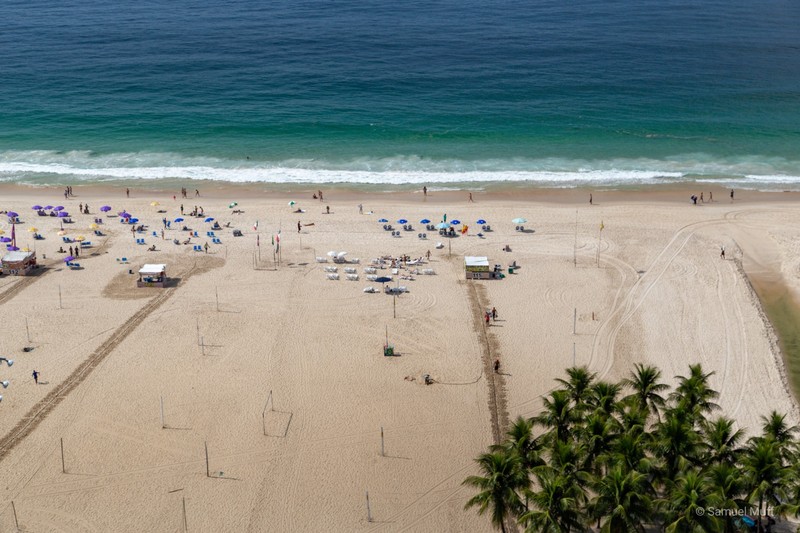 Lots of sales people walk up and down the beach, but we found them to be much less annoying than what we know from popular beaches in Southern Europe. They walk around announcing their product, but generally leave you alone unless you signal interest. You can buy useful things like Caipirinhas, beer, hats, bikinis or massages. One inventive guy even walked around with a miniature grill, offering to make a barbecue for you. Some sell crazy things like the two guys who walked around with a giant hammock and a bunch of heavy carpets. Who buys a hammock at the beach? There are no trees, so where would you attach it? So many questions!

The water was a pleasant 25 °C, but unfortunately there was quite some trash swimming in the water in some parts of the beach. One day, we went to explore nearby Ipanema beach and found this one to be much cleaner. Therefore, if we will ever come back to Rio, we would stay in Ipanema instead.

On our second evening in the city, we went to the famous Sugarloaf mountain. Two cable cars brought us to the top of the 392 meter high peak. There were too many clouds in the West to have a beautiful sunset, but the views were nevertheless amazing while we watched the lights go on in Rio. 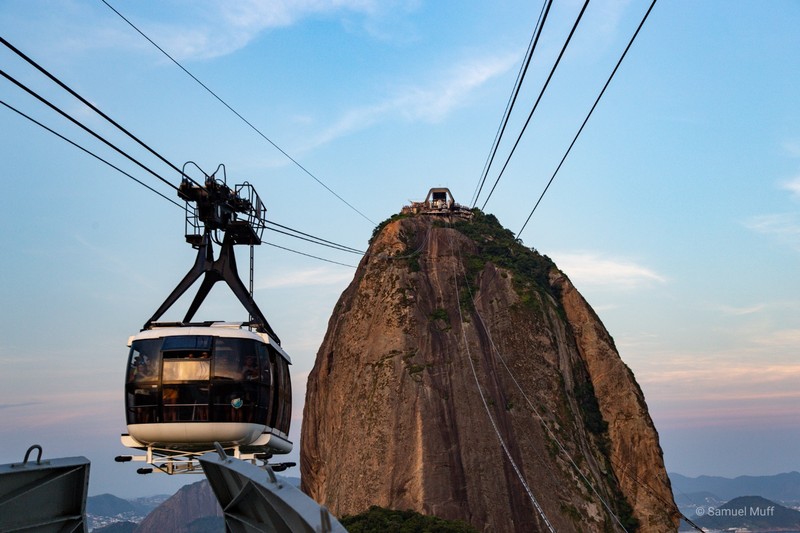 The cable car to Sugarloaf mountain 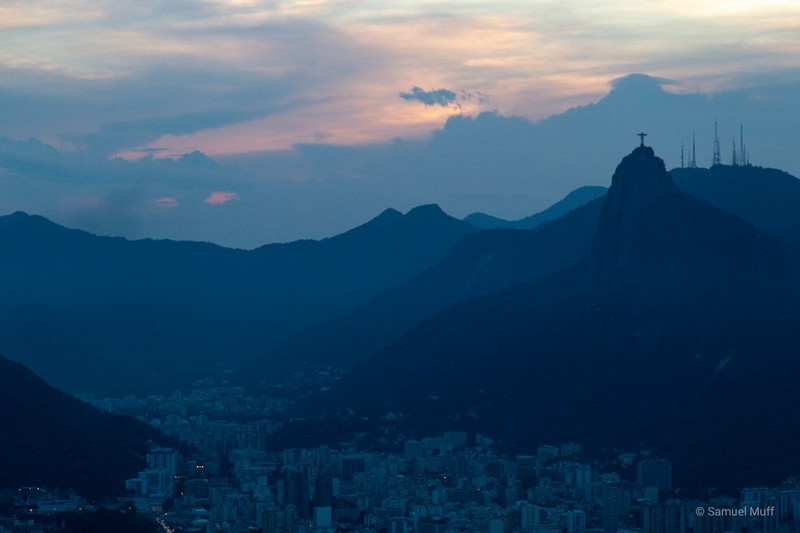 Christ the Redeemer standing over Rio at dusk, seen from Sugarloaf mountain 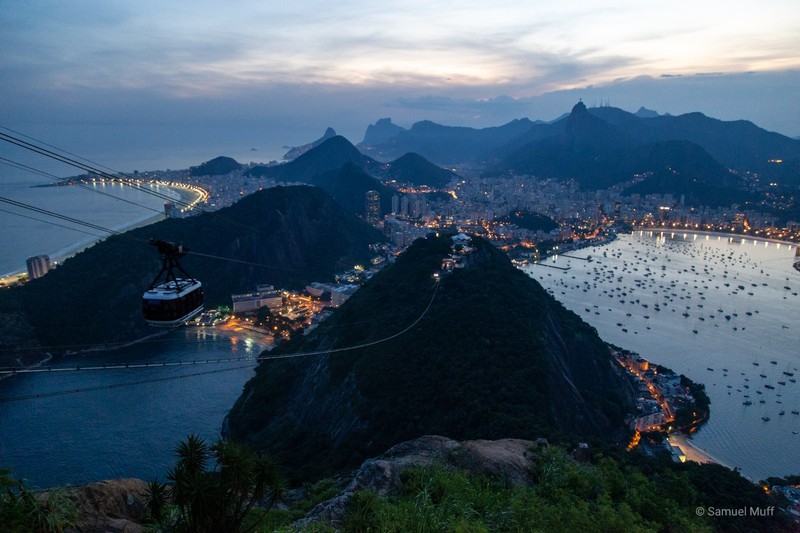 Rio de Janeiro at dusk with cable car in the foreground, seen from Sugarloaf mountain 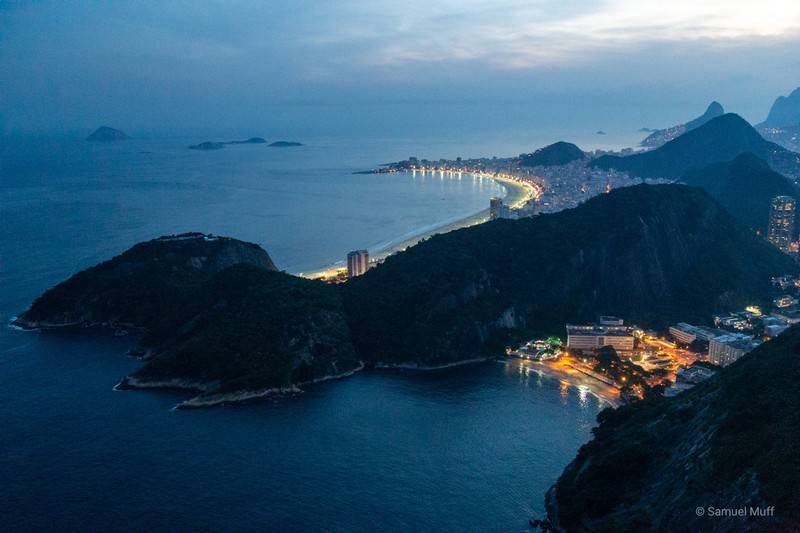 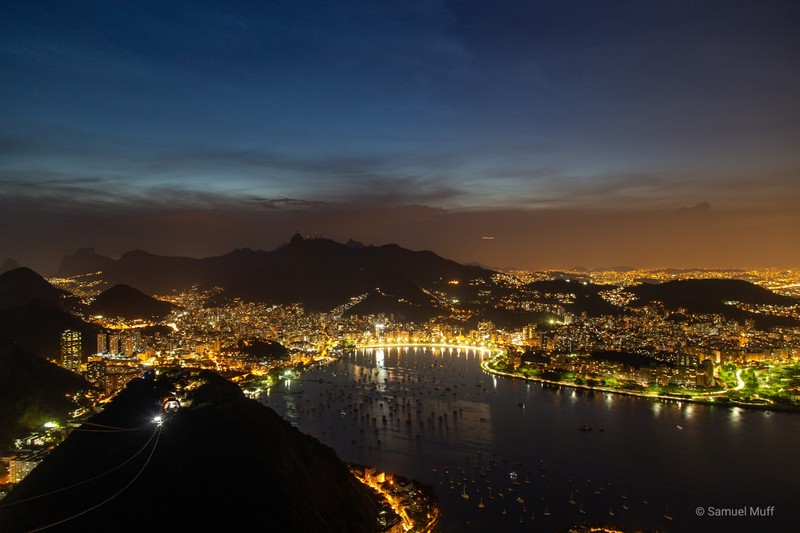 The second attraction we visited in Rio de Janeiro was the Christ the Redeemer statue. Probably Rio’s most recognizable landmark, it stands atop the 710 meter high mountain Corcovado. The platform at the top was very crowded, but that is no wonder given the views to be enjoyed from there. 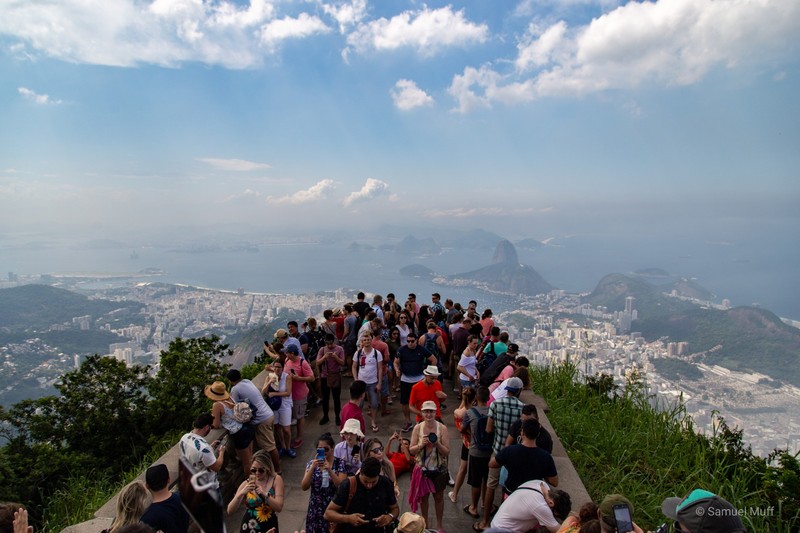 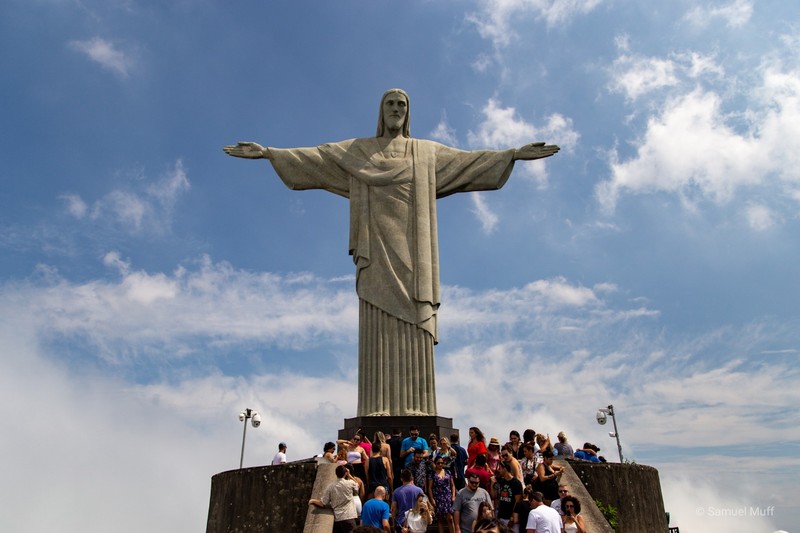 Christ the Redeemer on top of Corcovado 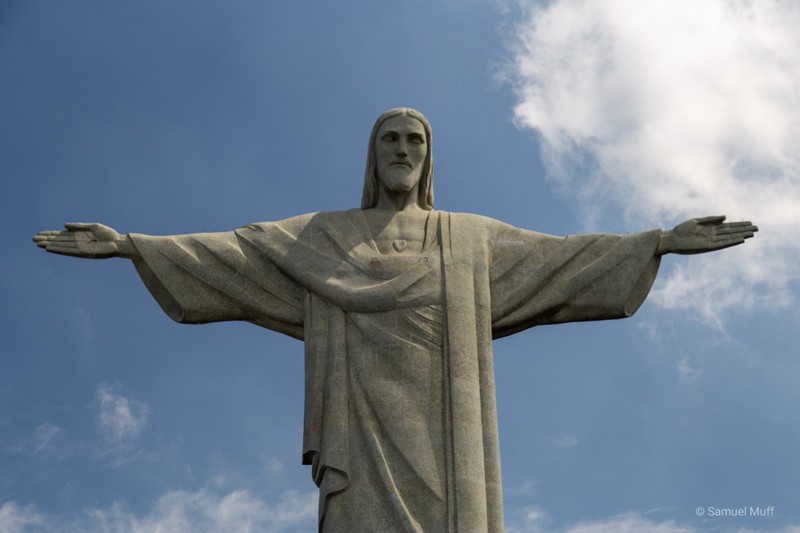 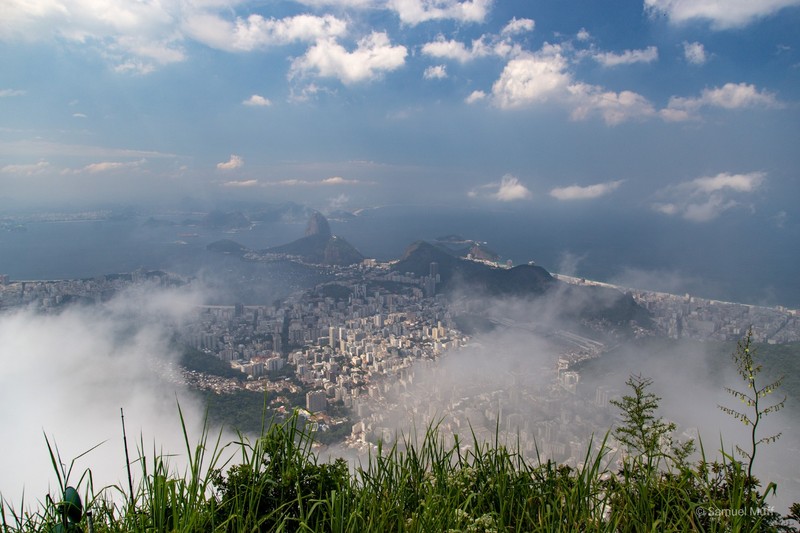 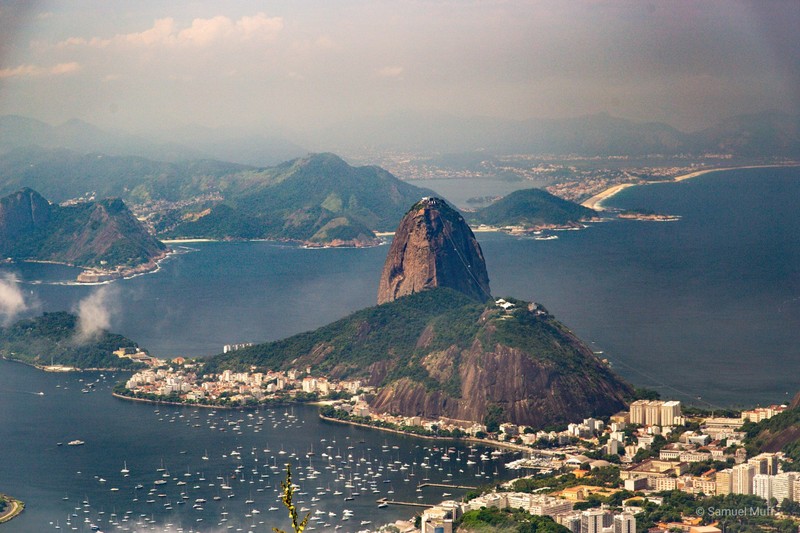 We had a great time in Rio de Janeiro and definitely did not regret the detour. It was not always easy to navigate with Spanish and English though. When people spoke Portuguese to us, we understood absolutely nothing. This language sounds completely different from Spanish.

We had good weather for the first four days in Rio, but the evening before our departure it started to rain so heavily that we did not leave the hotel for the rest of our stay. It poured down constantly until we departed for the airport. Only later did we learn that in this 24 hours, it had rained three times more than it usually does in the entire month of April. In poorer parts of the city, there had been floods and landslides. Luckily, we had no problems getting to the airport and departed without delays.