We entered Colombia at the airport in Bogotá, but did not stay in the capital yet. Instead, we continued straight to Cartagena at the Caribbean Coast, where we stayed for four nights in the historic old town. We have seen a lot of old towns in South America by now and Cartagena was the most beautiful of them all. The entire area within the old city walls looks like time had not passed since the Spanish founded Cartagena in the 16th century. Beautiful colonial buildings with wooden balconies on the second floor line almost every street and an old church is visible from nearly every corner. Unlike other South American cities we have visited, we also felt completely safe strolling through the streets at night here. They are full of life at every hour of the day, with people playing music, singing or enjoying a romantic horse carriage ride. We also had a great first impression of the Colombian people. They are very friendly, outgoing and just as colorful as their city. 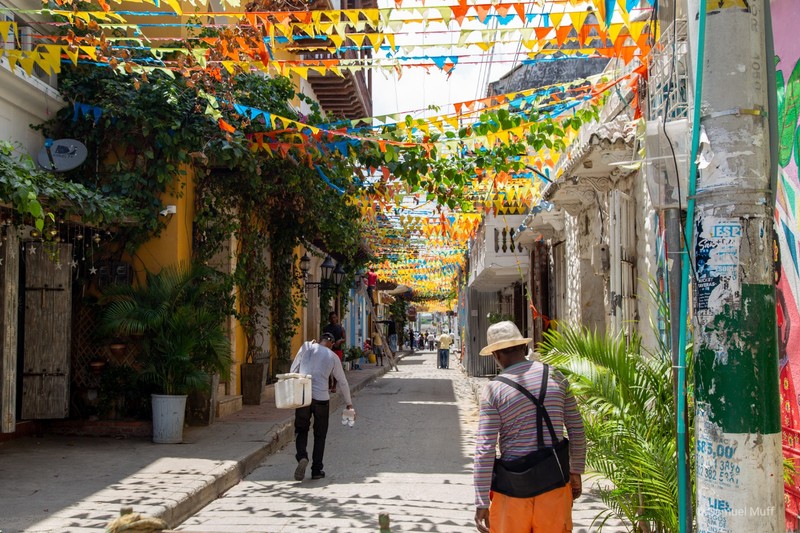 Street in the Getsemani neighborhood of Cartagena 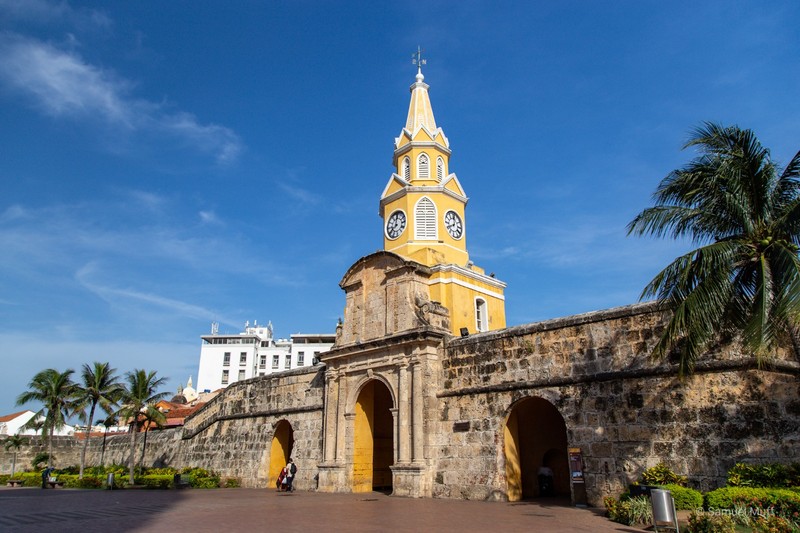 The old clock tower of Cartagena 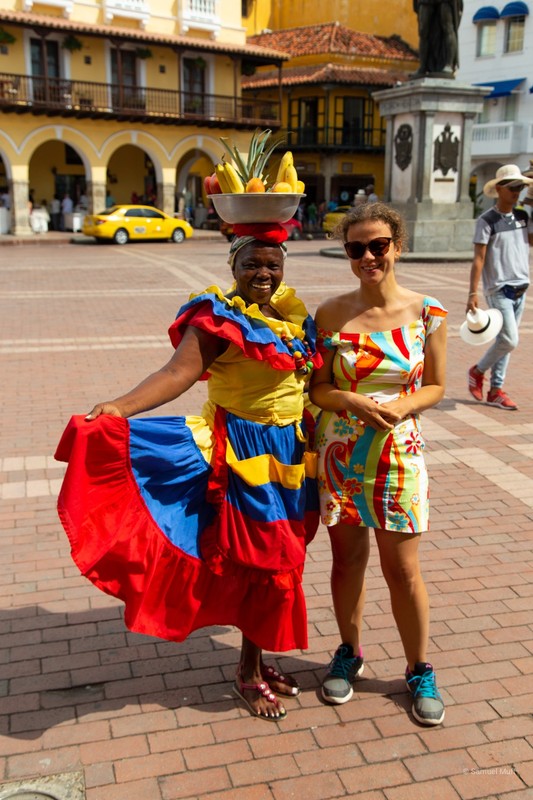 Marta with a Palenquera 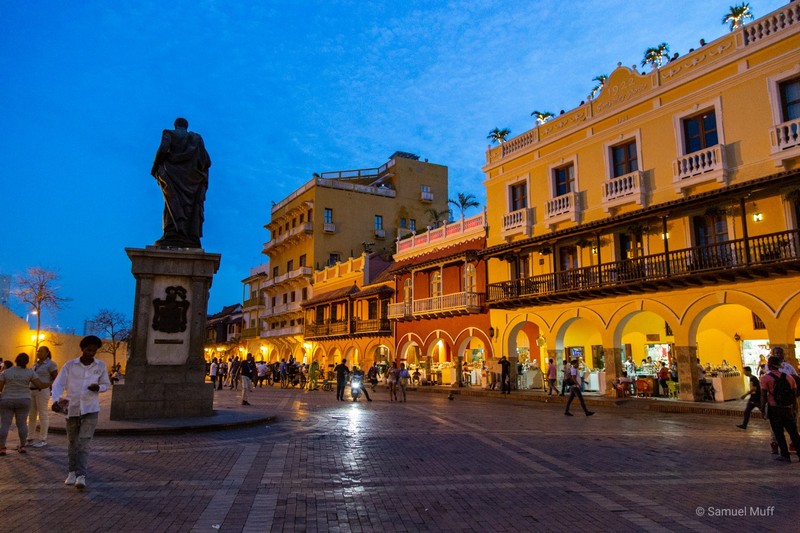 Colonial houses in Cartagena’s old town in the evening 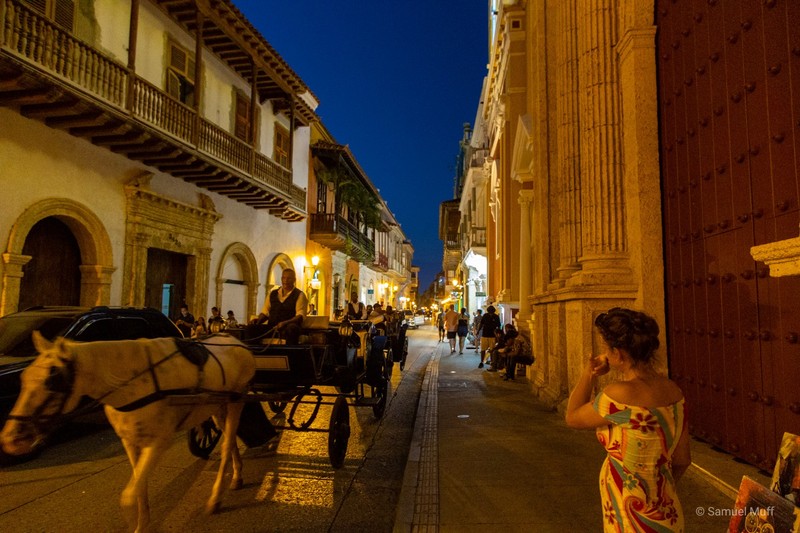 Marta walking through the old town of Cartagena at night 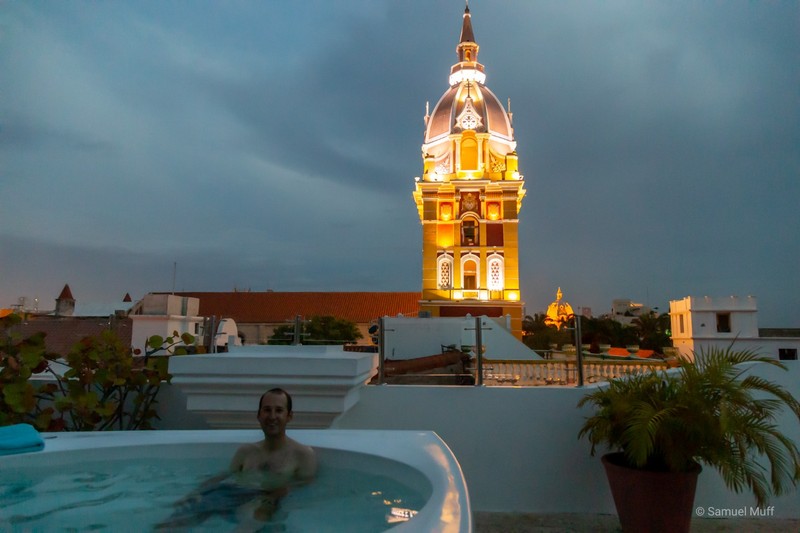 Just outside the old city walls there is the huge Castillo San Felipe de Barajas, a fortress from the 16th century. We visited on a beautiful afternoon and enjoyed it a lot. The structure is built on top of a small hill and there are fantastic views over the old town, as well as the rich and shiny neighborhood of Bocagrande. The Caribbean vibes were complemented by flocks of parrots flying overhead. The fortress is very well preserved given its age. There are many “secret” pathways underground connecting the different parts of the castle and it was possible to explore those too. 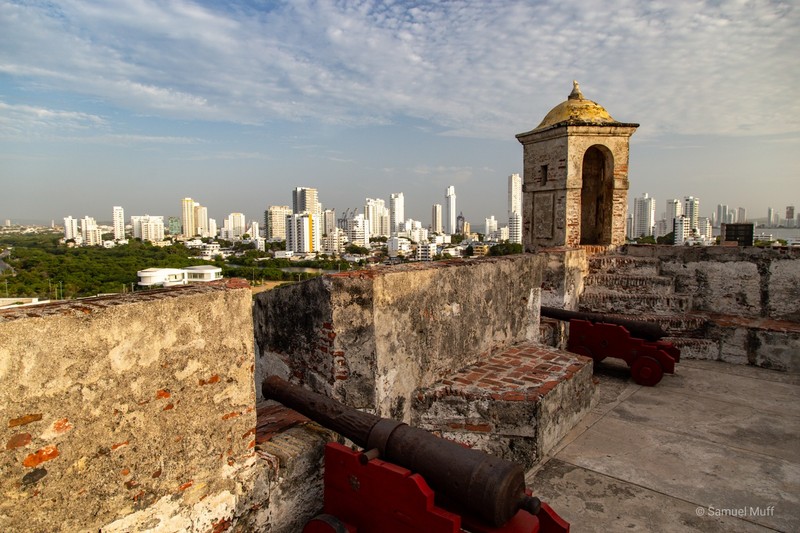 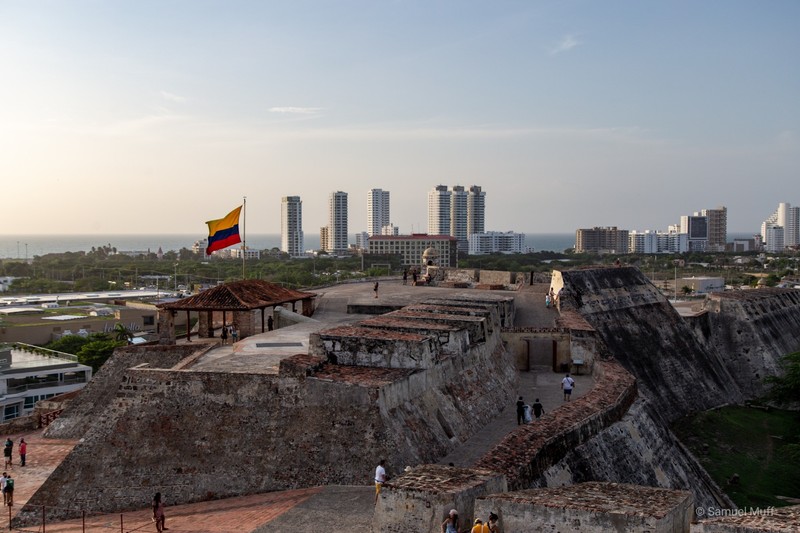 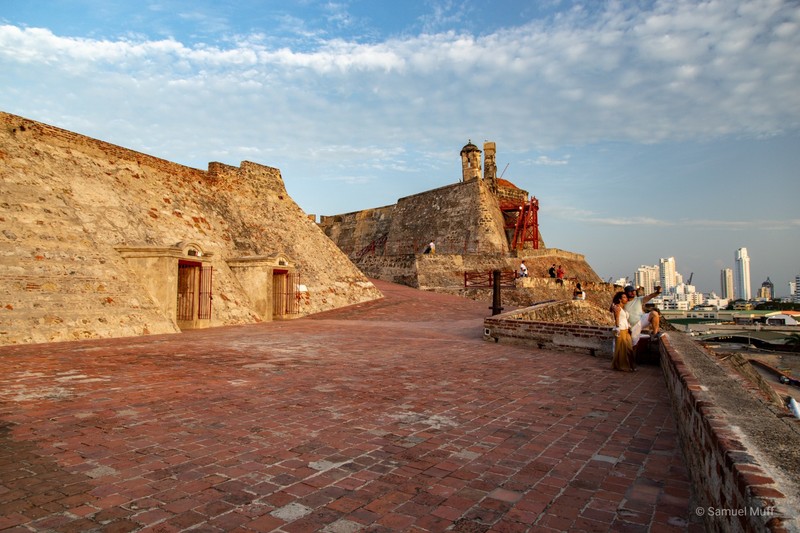 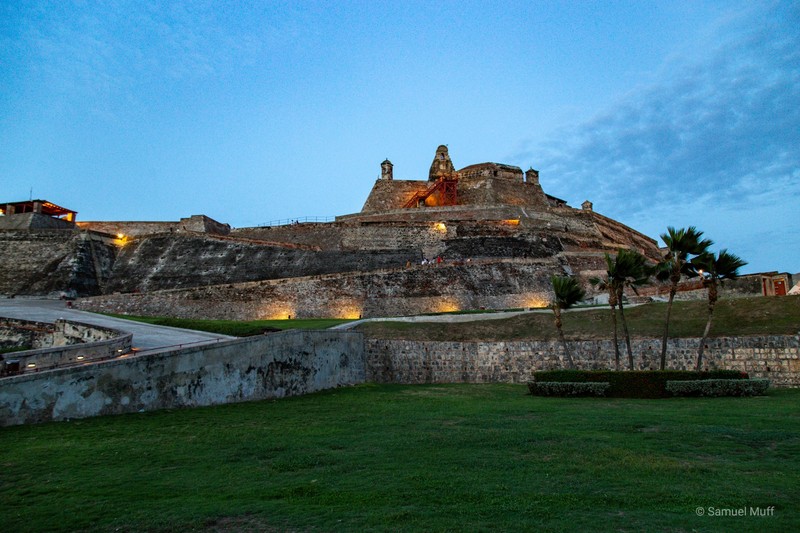 On our last day in Cartagena, we joined a daytrip aboard a 26-meter catamaran to the Rosario islands. This small archipelago in the Caribbean sea is also a national park. However, we did not have high expectations for wildlife and mainly came to swim and relax on the boat. The huge catamaran could fit 200 people, but there were only 30 to 40 tourists onboard. Perfect to relax with a pleasant breeze while drinking an ice cold drink. The islands were not overly impressive, but the roughly 28 °C warm water was a bliss. We also went snorkeling in two different spots and while the coral was not very colorful, there were surprisingly many beautiful fish. Another highlight of the trip was the inflatable pink flamingo provided by the crew, which was ideal for shooting that perfect Caribbean vacation photo. 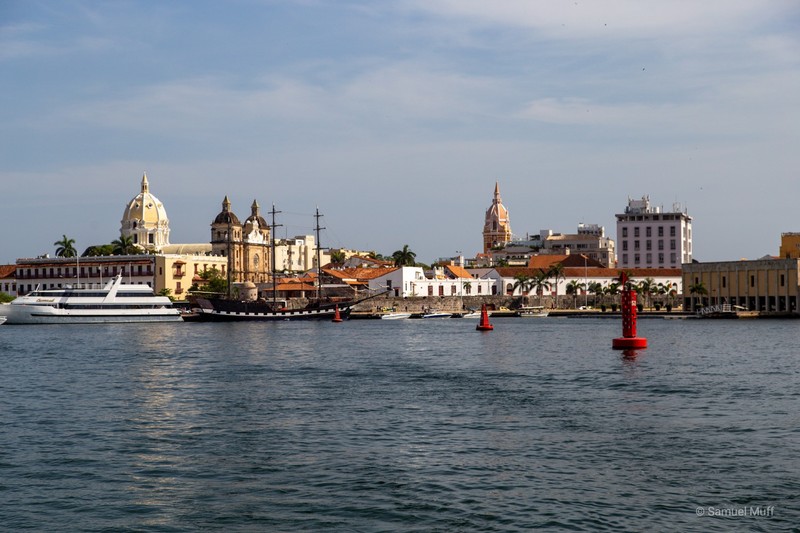 Cartagena’s old town from our catamaran 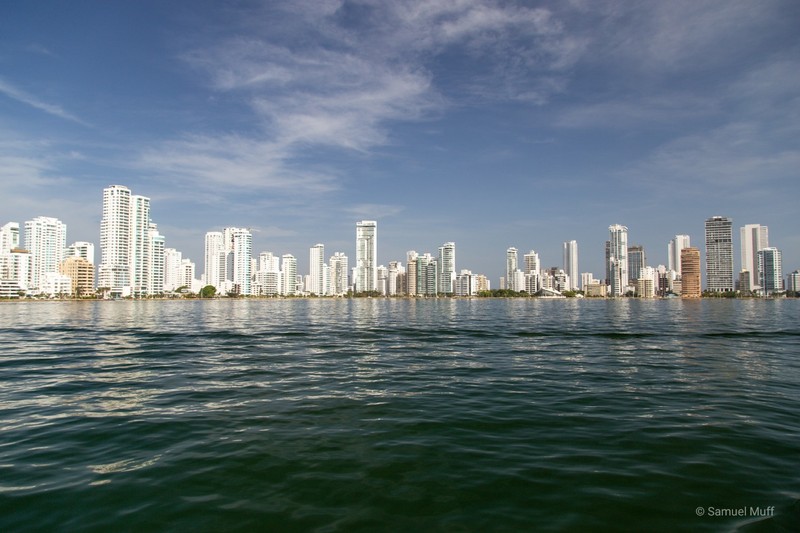 The Bocagrande neighborhood from our catamaran 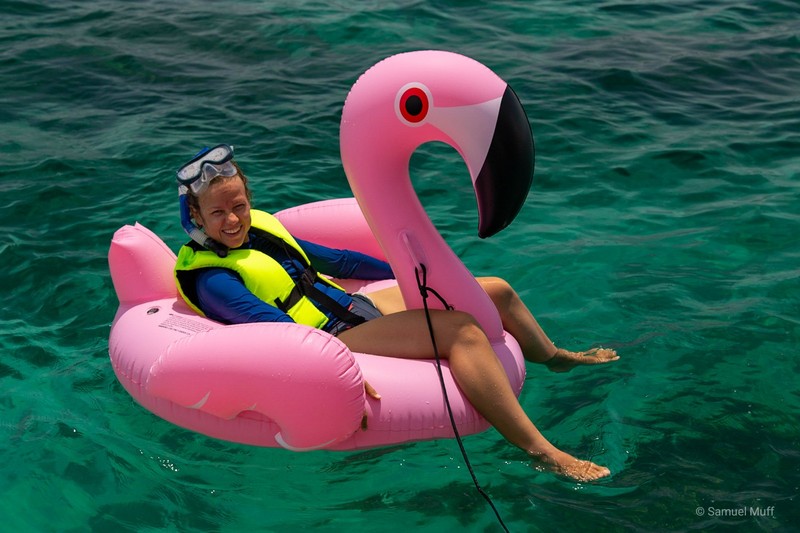 Marta on an inflatable pink flamingo in the Rosario islands 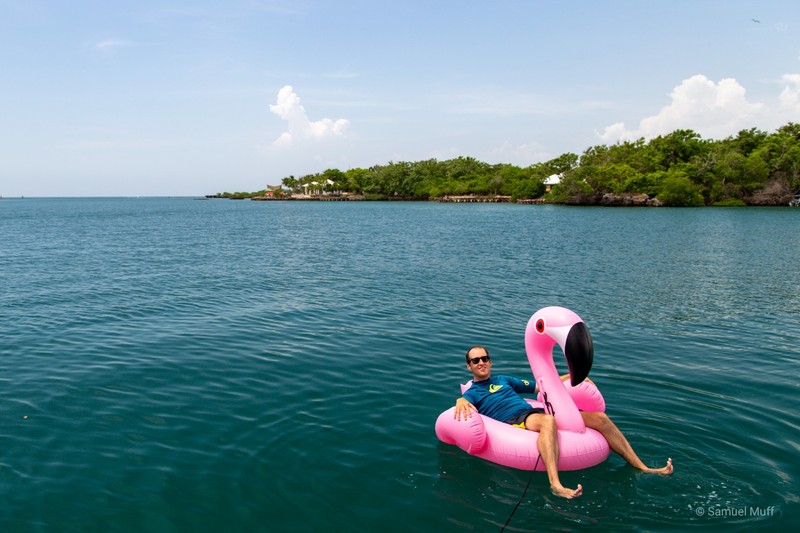 Sam on an inflatable pink flamingo in the Rosario islands 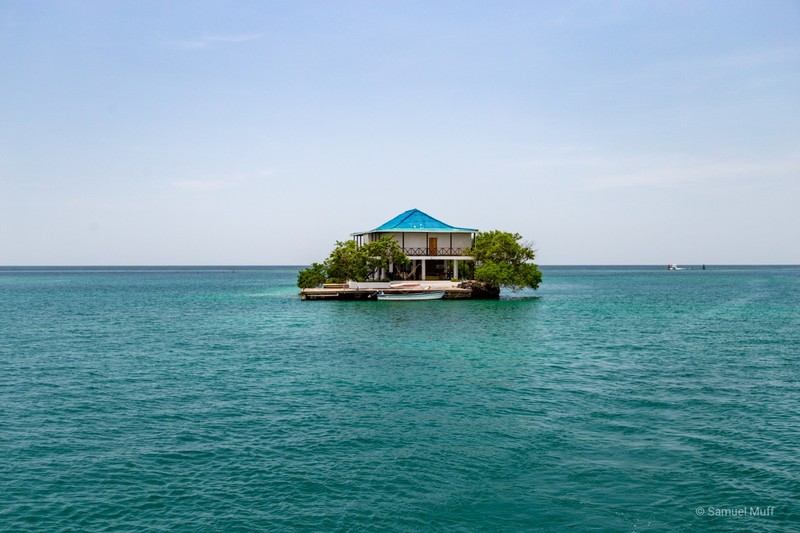 The next day we took a bus along the coast to Santa Marta. From there, a taxi brought us the last hour to our hotel, right next to Tayrona National Park, where we stayed for three nights. Sadly, all the beaches near our hotel had very strong currents and were therefore unsafe for swimming. In fact, almost all the beaches in this area of Colombia are very dangerous. Because of this, we were very glad to have a beautiful pool in our hotel where we spent hours every day. Even better, the hotel allowed for drinking in the pool so we made good use of the happy hour every evening. 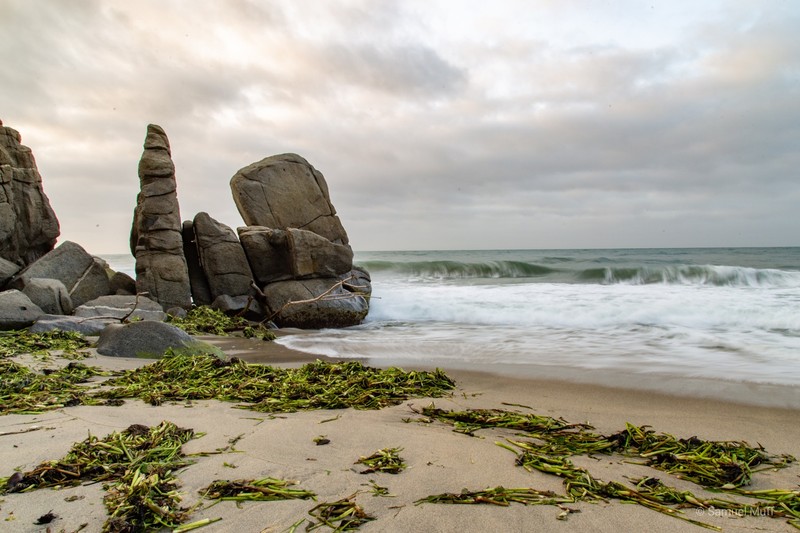 Playa Los Naranjos near our hotel 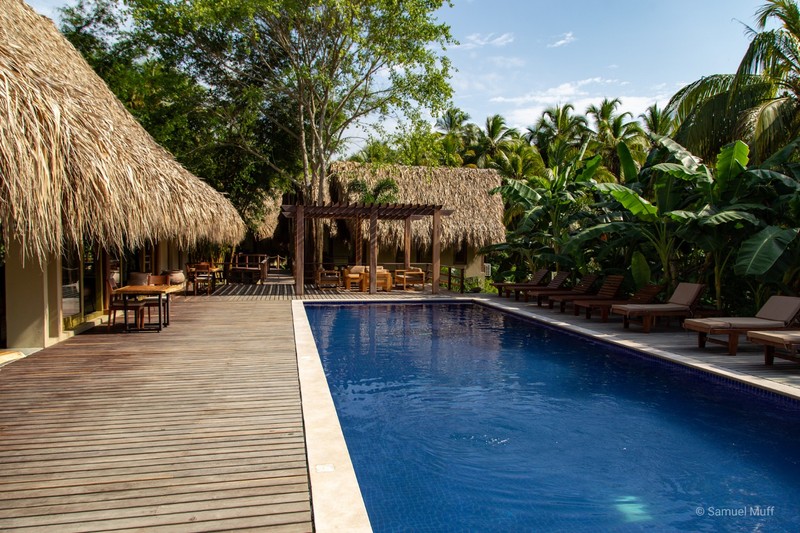 The pool at our hotel

Our day in Colombia’s most famous national park was fantastic, but also very strenuous. Our hike was only 12 kilometers for the round-trip, but at 30 °C and very high humidity it still took an effort. The hike led us up and down through the jungle, past very beautiful beaches and under tall palm trees to Cabo San Juan. At this peninsula there are two almost symmetrical beaches which were safe for swimming. Of course, we took advantage of that and went for a swim there. While the scenery was very beautiful, it was also very crowded. Tayrona National Park is very popular among Colombians too and since we went on a Saturday the park was really full. After lunch on the way back, we stopped at Playa La Piscina which is also safe to swim. We liked this beach even more, because it had much less people and the water was calmer too. We ended the day like every other day here, with a cocktail in the pool. 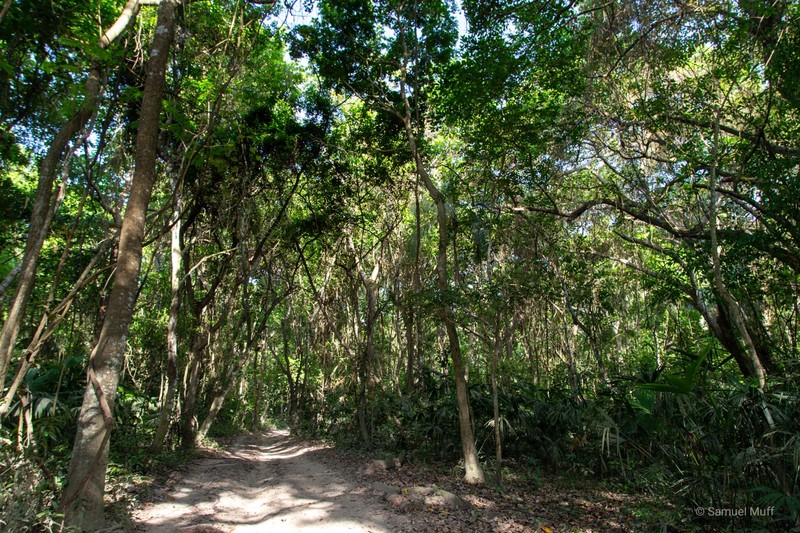 Path through the jungle in Tayrona National Park 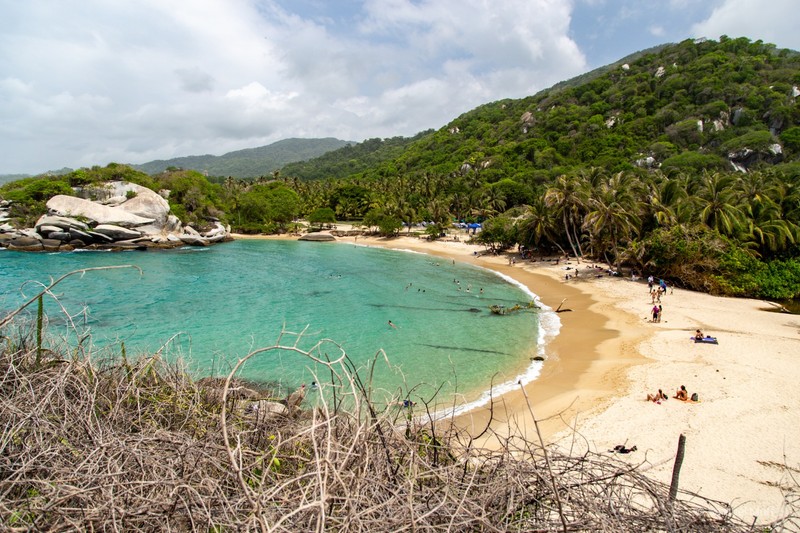 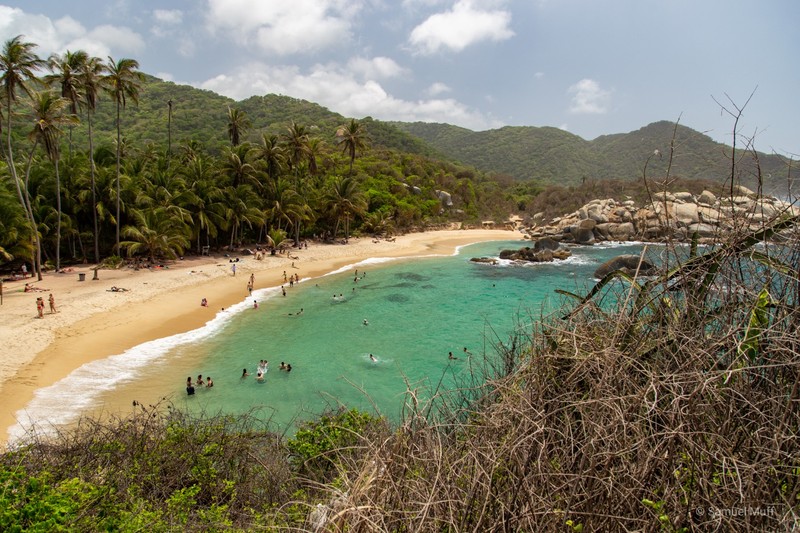 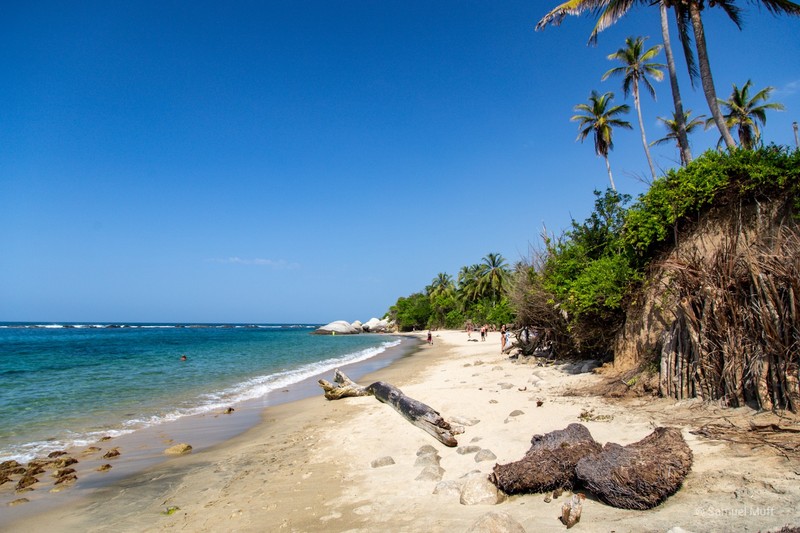 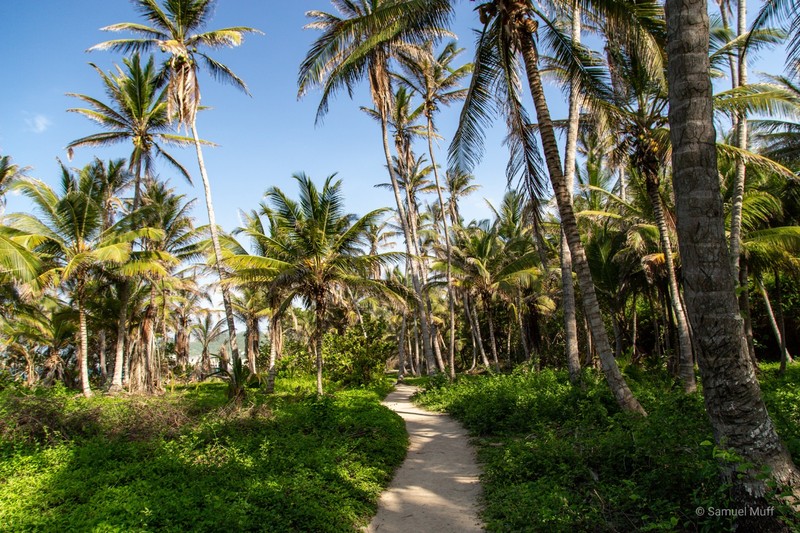